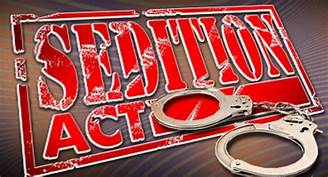 The Never-Ending Controversy Around Section 124A IPC- Sedition

Sedition laws were enacted in 17th Century England when legislators accepted that only positive opinions about the government ought to be expressed, as negative and coercive opinions were inconvenient to the public authority and government.

The law was initially drafted in 1837 by Thomas Macaulay, a British history specialist. At first, Section 124A was not included in IPC when it was authorized in 1860. Sedition was, in this manner, made an offense in British India since the Government speculated on a Wahabi uprising. Wahabi movement was kind of a revivalist movement that tried to purify Islam by discarding the un-Islamic practices which were introduced into Muslim society through ages. The period of the movement can be marked from the 1820s to the 1870s. Accordingly, in 1870, Section 124A was added to Chapter VI of the IPC, which is dedicated to offenses against the State.

Sedition is a crime under Section 124A of the Indian Penal Code (IPC) which says- ‘whoever by spoken or written, or by signs, or by visible representation, or otherwise, brings or attempts to bring into hatred or contempt, or excites or attempts to excite disaffection towards the Government established by law in India’ shall be punished with life imprisonment.

Three explanations added to the provisions recommend that while “disaffection” will incorporate disloyalty and all feelings of animosity, comments without exciting or attempting to excite hatred, contempt or disaffection, won’t establish an offense.

Remarkable Sedition Trials Of All Time:

The penal provision proved to be useful to curb patriot voices and demands for freedom. The extensive rundown of India’s national heroes who were categorized as accused in cases of sedition includes Bal Gangadhar Tilak, Mahatma Gandhi, Bhagat Singh, and Jawaharlal Nehru.

The first among the nationalist was the trial of Jogendra Chandra Bose of 1891. Bose was the editor of the newspaper named Bongobasi. He wrote an article condemning the Age of Consent Bill for posing a threat to religion and for its negative influence on Indians.

Bal Gangadhar Tilak was the main individual to be convicted for sedition in British India. The British government brought the charge, alleging that the articles conveyed in Tilak’s Marathi paper Kesari would incite individuals to thwart the government endeavors for checking the plague epidemic in India. In 1897, Tilak was alleged by the Bombay high court for sedition under Section 124A and was put behind the bars for 18 months. Tilak was held liable by a jury made out of nine individuals, with the six white jurors casting a ballot against Tilak, and three Indian jurors casting a ballot in support of Tilak. Afterward, Section 124A was given various interpretations by the Federal Court, which started working in 1937, and the Privy Council, which was the highest court of appeal situated in London.

The Privy Council followed the precedents set down for Tilak’s situation and decided that incitement to violation was not a prerequisite for the crime of sedition and that incitement of feelings of enmity against the government was adequate to set up charge under Section 124A.

Status of Sedition Law after Independence: KM Munshi moved an amendment to eliminate “sedition” that was mentioned in the draft Constitution as a ground to impose limitations on the fundamental right of freedom of speech and expression. Therefore, the word “sedition” was subsequently removed from the Constitution when it was adopted on November 26, 1949, and Article 19(1)(a) gave complete freedom of speech and expression. However, Section 124A kept on remaining in the IPC.

In 1951, Jawaharlal Nehru introduced the first amendment to the Constitution to restrict freedom under Article 19(1)(a) and authorized Article 19(2). The new Code of Criminal Procedure, 1973, repealed the age-old 1898 Code of Criminal Procedure, and eventually, sedition was made a cognizable offense approving the police to arrest without a warrant.

Sedition Law As A State-Protection Mechanism:

The problem emerging from different opinions of the High courts was at last settled by the Supreme Court through its judgment in the Kedar Nath case in 1962, which is viewed as the most definitive judgment of the Supreme Court on the interpretation of the sedition law. A Constitution bench upholds the legitimacy of the sedition law laid down in IPC, holding that the objective behind the crime of sedition was to prevent the government set up by law from being overthrown by some unscrupulous activities. In Balwant Singh and Anr Vs State of Punjab (1995), the Supreme Court dropped sedition charges against two men who raised slogans for an autonomous Sikh majority State outside a movie hall in the aftermath of the assassination of the former PM Indira Gandhi. The court decided in favor of the accused, calling attention to the fact that acts didn’t add up to sedition since the slogans didn’t prompt any unsettling influence, and was not prone to instigate any violence in the minds of the targeted group.

The Law Commission of India, in its report, distributed in August 2018, additionally saw that while holding the law of sedition was important to secure public trustworthiness, it should not be used as an instrument to check free speech.

India is the largest democracy globally, and the right to free speech and expression is the heart and soul of a well-functioning democracy. The articulation or thought that isn’t in agreement with the strategy of the government ought not to be considered as sedition. Obviously, it is fundamental to secure public safety and integrity. So, the best option is to choose a mid-way that will actually solve the problem rather than ruthless and baseless arrests and detention.

The article has been edited by Shubham Yadav, pursuing B.com LL.B. from Banasthali Vidyapith.