Way Forward To Safeguard The Biodiversity 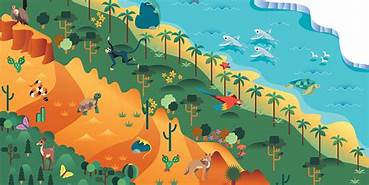 “We won’t have a society if we destroy the environment.”

The best gift that mankind possesses is not the economy, it’s the environment, the gift that mother earth gave, without repentance. Our environment is perhaps the main facet due to which survival is possible on this planet. Also, it is the only thing that makes life reasonable. Without it, we can’t endure even a single day.

India has an extraordinary abundance of biodiversity in its forests, wetlands and marine regions. It has a wide scope of natural surroundings going from tropical rainforest to snow capped vegetation and from temperate forests to coastal wetlands. India comprises fertile river fields and high plateau and a few significant waterways including the Ganges, Brahmaputra and Indus. India shows an incredible variety in environment, geography and topography henceforth exceptionally wealthy in biodiversity. The Ministry of Environment and Forest Govt. of India (2000) records 47,000 types of plants and 81000 types of animals.

This is about 7% and 6.5% individually of flora & fauna of the world. Around 5000 types of blooming plants have their origin point in India. India is observed to be the pivot of origin of 160 types of harvest plants and 320 types of wild members of cultivated yields. India has 372 mammal species (eighth most in world), 1228 types of birds (eighth in world), and 428 types of reptiles (fifth in world). India has in excess of 50,000 types of insect species including 13000 butterflies and moths.

There are 4 out of 36 biodiversity hotspots of the world situated in India — The Himalayas, the Indo-Burma region, Western Ghats, and the Sundaland. Hotspots will be regions that are very rich in species, have high endemism (species restricted to a specific region), and are under constant danger.

Concept of hotspots of biodiversity was instituted by Norman Myers in 1988. He recognized they needed regions for in situ protection. Certain regions in different parts of the world are known for their mega biodiversity of species. India contributes around 8% of worldwide biodiversity, in spite of the fact that it bears just 2.4 percent of the world’s land space. These regions are especially wealthy in floral riches and endemism, in blossoming plants as well as in reptiles, amphibians, butterflies and mammal species as well.

Classification of a Biodiversity Hotspot

To qualify as a biodiversity hotspot the region must fulfill 2 criteria:

Steps taken to safeguard the Indian biodiversity & hotspots by government

The shortfall of an unmistakable law is moving a back-and-forth between clients of natural assets and administrative bodies. It is presently about time that the judiciary strides in to develop jurisprudence on manageable and even handed administration of biodiversity while protecting the Constitutional principles against arrest, search and seizure.

In the case of Rural Litigation and Entitlement Kendra, Dehradun vs. State of Uttar Pradesh, the two judge bench of J. Bhagwati & J. R. Mishra, Seat of Judges PN Bhagwati and Ranganath Mishra, presented the concept of “Sustainable Development”. An NGO named RLEK filed a case against limestone quarrying in the valley in 1987. It was expressed that the lasting resources of humankind are not to be depleted in one age. The natural resources ought to be utilized with imperative consideration and care so ecology and climate may not be influenced in a critical manner.

In case of, Indian Council for Enviro-Legal Action vs. Union of IndiaJ. Reddy held that the monetary expenses of forestalling or curing harm brought about by contamination should lie with the endeavors which cause the contamination by embracing the “Polluter Pays Principle”. The Court put forth a limit for the seaside states to formulate coastal administration designs and restrict industrial or construction within 500 meters of the Elevated Tide Line.

In the case of, Animal Welfare Board of India vs. A. Nagaraj and Ors., the Supreme Court banned Jallikattu & other animal races & fights, alluded that even these carried in the name of culture & tradition but these are illicit acts that the humans perform. Referring to Section 3 & 11 The Court declared these acts illegal & imposed fines under the Prevention of Cruelty to Animals Act, 1960.

TN Godavarman Thirumulpad vs. Union of India and Ors., Supreme Court held & set up a Compensatory Afforestation Funds Management and Planning Authority (CAMPA), to survey the afforestation endeavors, to direct the remuneration who endured because of deforestation, and to speed up exercises for safeguarding of forests.

In the Tarun Bharat Sangh vs. Union of India and Ors., Supreme Court passed the verdict that restricted/banned the mining activities that were taking place in the Sariska Wildlife Sanctuary & proved to be a great source for the protection of Sanctuaries from the mining activities.

As we progressively become clued-up of how significant biodiversity depletion has become, we are gradually making laws and treaties to safeguard these resources. This duty of protection needs the involvement of stakeholders and consumers. Essentially distinguishing species in danger cannot initiate protection. Individuals are to be taught in such a manner. They should preserve biodiversity.