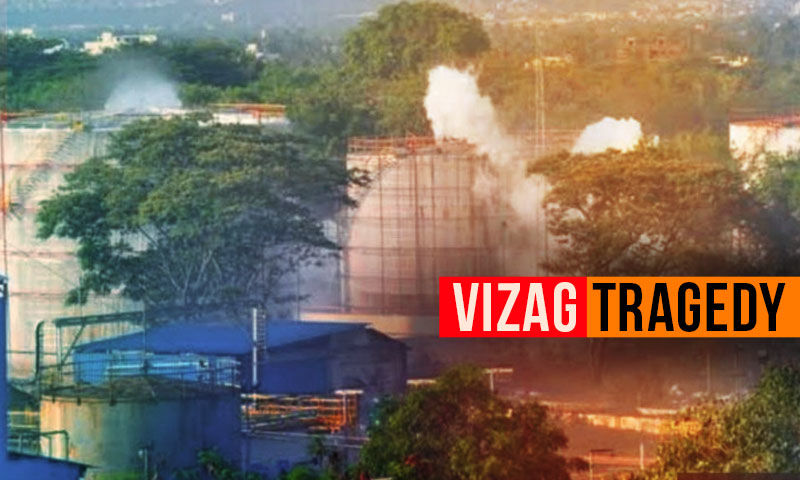 This article is written intending to explain the incident of Vizag gas leakage and the concept of strict liability. Picture credits to Live Law

The Vizag gas leak also known as Visakhapatnam gas leak, was an industrial accident that took place at the LG Polymers chemical plant in the R. R. Venkatapuram village of the Gopalapatnam neighbourhood, located at the outskirts of Visakhapatnam, Andhra Pradesh, India, during the early morning of 7 May 2020.

This incident is believed to be one of the most horrifying tragedy in the history of India, which took 12 lives, and thousands of lives affected due to toxicity in the air. People were afraid relating it to the Bhopal gas tragedy which holds a special place in the list of most tragic incident.

What Led to the Tragedy?

Clear cut negligence” and “gross human failure” on the part of LG Polymers, was responsible for the Visakhapatnam Styrene gas leak on May 7, says the report filed before the National Green Tribunal (NGT) by a special committee. The report indicates that LG Polymers had not complied with basic safety norms. More than 800 tonnes of Styrene, a gas which is hazardous and can cause respiratory illness and skin irritation, had leaked from the plant owned and operated by LG Polymers.

The concentration of Styrene in the air at Venkatapuram village, which is about 100 meters from the factory, was beyond hazardous levels at 461 ppm on May 7, 374 ppm after over 24 hours on May 8, and remained at 1.5 ppm even on May 10, three days after the disaster. The concentration remained at over 41.2 micrograms even till May 14 and reduced to below 16.7 micrograms by May 16 revealed the sampling done by a team of National Environmental Engineering Research Institute (NEERI) personnel.

Styrene is an organic compound used in the manufacture of polymers/plastic/resins. It is manufactured in petrochemical refineries and is a likely carcinogen. It can enter the body through respiration, but also through the skin and eyes. According to India’s Manufacture, Storage and Import of Hazardous Chemical Rules 1989, styrene is classified as a “hazardous and toxic chemical”. Short-term exposure to styrene in humans results in irritation in the mucous membrane and eye, and gastrointestinal problems. Long-term exposure impacts the central nervous system, leading to headaches, fatigue, weakness, depression, dysfunction, hearing loss, and peripheral neuropathy.

A highly reactive chemical, Styrene is used to manufacture polystyrene and needs to be stored at less than 18-degree celsius to ensure that it does not polymerise. The process of polymerisation is one where monomers of styrene combine with each other to form larger chains is exothermic i.e. the process generates heat.

In its findings, the committee stated that neither the factory inspector nor the fire officials were aware of how to deal with chemical disasters, and the district administration of Visakhapatnam and Vizianagaram did not coordinate rescue and relief efforts.

The principle of strict liability states that any person who keeps hazardous substances on his premises will be held responsible if such substances escape the premises and causes any damage. It was evolved after the case of Rylands vs Fletcher. Where a person, F had a mill on his land, and to power the mill, F built a reservoir on his land. Due to some accident, the water from the reservoir flooded the coal mines owned by R. Subsequently, R filed a suit against F. The Court held that the defendant built the reservoir at his risk, and in course of it, if any accident happens then the defendant will be liable for the accident and escape of the material.

It can be said that if a person brings on his land and keeps some dangerous thing, and such a thing is likely to cause some damage if it escapes then such person will be answerable for the damaged caused. The person from whose property such substance escaped will be held accountable even when he hasn’t been negligent in keeping the substance in his premises.

If we have a tendency to take into account the said incident of gas leak , then it appear that the strict liability invoked by the NGT was wrong because the facts and circumstances of the case of LG Polymers, it’s evident that the character of the substance used and also the activities of each the businesses (UCIL and LGPI) square measure similar in nature, and thereby, the principle of absolute liability ought to are applied during this case too. the applying of the principle of absolute liability doesn’t need the explanation for incident or the ‘consent’ of the facility’s operators to be famed to create any enterprise liable. The liability is triggered by the mere escape of venturesome substances, regardless of the cause. Hence, NGT ought to have invoke absolutely the liability. In my opinion, the government officials involved should be taken to task immediately by the High Court and departmental inquiries should be initiated against such officials and it should be seen that the people responsible in our system along with the Directors of the Company, are awarded the maximum punishment for such deliberate negligent act, which claimed innocent lives. Only then, it will act as a deterrent for different officers and corporations who act in such brazen defiance of the statutory norms. This incident proves the actual fact that regardless of what proportion we tend to attempt, till and unless we tend to raise our voice against corruption, innocent lives can still get sacrificed.

Criminal Breach of Trust and Criminal Misappropriation
Call for Blogs: The Opinion
WORLD OZONE DAY CELEBRATION 2020 – WEBINAR ON “OZONE FOR LIFE” ON 16 SEPTEMBER 2020