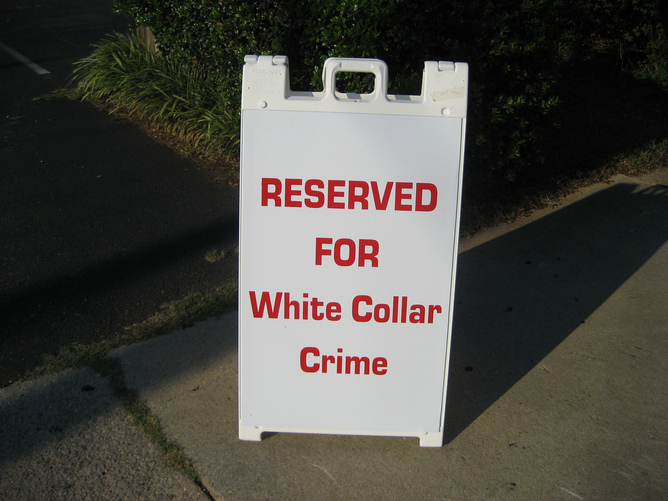 The term was coined in 1939 by American criminologist Edwin Sutherland. It drew attention to the typical attire of the perpetrators, who were generally businesspeople, high-ranking professionals, and politicians. Today the scope of what collar crimes has been greatly widened. White-collar crime refers to a set of nonviolent crimes committed with a motive of financial gain. These crimes are often characterized by deceit, concealment, or violation of trust. The motivation for these crimes is to obtain or avoid losing money, property, or services, or to secure a personal or business advantage. Examples of white-collar crimes include securities fraud, embezzlement, corporate fraud, and money laundering.

Since the time the term “white-collar crimes” was coined by Sutherland, there have been various theories that suggest reasons for such crimes. The most popular ones are as follows-

Each theory gives its own set of reasons as to why a crime is committed. Most theories are entwined with each other in a manner where they support each other or entirely dismiss the other.

Sutherland’s Theory of Differential Association was the first formal effort in explaining criminal behaviour. It was also one of the most influential social learning theories of modern criminology. The theory went through different stages of development. Sutherland first proposed seven statements in the 1939 edition of “Principles of Criminology ” which he later proposed in the form of nine key postulates in 1947.

This assumption presents a principle that is different from the classical theories of criminology. Lombroso, for example, defended the opinion that criminality is inherited, and someone is a “born criminal”. Sutherland, however, disagreed with the classical theory and said criminal behaviour is learnt by a criminal over time.

Sutherland postulated that communication plays a crucial role in learning criminal behaviour. The term “association” in differential association refers to the various people the subject had contacted that led to this respective behaviour of theirs.

According to this principle, Sutherland stated that the more intimate association causes a bigger impact on behaviour. The most intimate social contacts such as family, friends or peers have the greatest influence on deviant behaviour. Impersonal communication, such as movies or newspapers hardly play a role in committing criminal behaviour.

b) The specific direction of motives, drives, rationalization, and attitudes.

Sutherland´s central statement is derived from the deliberation that every person has both definitions favourable to violation of law and definitions unfavourable to violation of law. This statement explains the term “differential” in differential association theory. This proposition in simple terms can be put as weighing the pros and cons of doing an act when compared to not doing it.

Sutherland assumed that all associations do not carry equal weight and that their quality influences whether a person becomes criminal or not. Frequent contacts have greater effects than infrequent contacts. Those of long duration have a greater influence than those of short duration. Priority refers to the time that particular associations are initiated. Childhood experiences have a greater impact than experiences in later life. Finally, intensity explains the degree of identification with special associations. For example, the influence of a close friend outweighs the impact of an acquaintance.

This statement emphasizes that the process of learning criminal behaviour does not vary from any other learning processes, such as writing, painting, reading, etc.

The final statement of differential association suggests that both criminal behaviour and common behaviour are products of similar needs and values. Regarded as an example, thieves generally steal in order to save money, but likewise honest employees work in order to make money.

To sum up Sutherland’s Theory of Differential Association, it states that criminal behaviour is learned in association with those who define such criminal behaviour favourably and insolation from those who define it unfavourably, and that a person in an appropriate situation engages in White-collar Crime if, and only if, the weight of definitions favourable exceeds the weight of the unfavourable definitions.

Sutherland’s theory of differential association was developed into the Differential Reinforcement theory by Burgess and Akers. This theory criticized the Differential Association theory by stating that it’s not just social factors such as family, friends or peers who can influence someone to commit a crime but also anti-social factors such as depression, drugs, etc. that can influence criminal behaviour. It was also criticized for not considering individual differences. People are independent, individually motivated beings. As a result, they may not learn to become criminals in the ways differential association predicts.