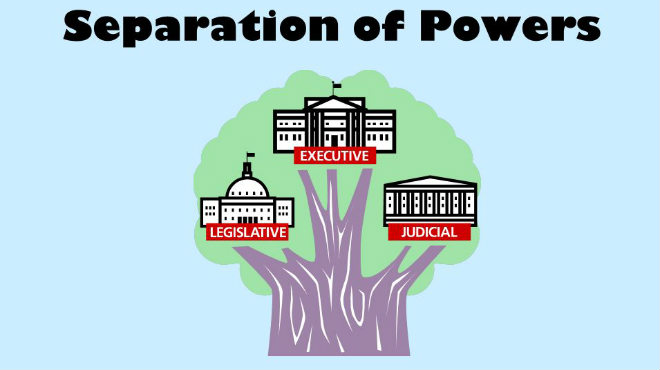 Separation of Powers In India

This article has been written by Chaudhary Nikhat Fatima, currently pursuing Law from Rizvi Law College. Picture Credits to Lawrato.com

History has time and again shown that unlimited power in the hands of one person or group in most cases means that others are suppressed or their powers curtailed. The separation of powers in a democracy is to prevent abuse of power and to safeguard freedom for all and thus Separation of power is an essential element in order to make the government work in an appropriate way.

The term separation of powers was first introduced by Montesquieu, his theory lay that it was in the nature of authority to abuse it and that unless clear limitations we’re laid down, the arbitrary rule would be inevitable. According to him moderation in the exercise of government authority was the essential requisite of a good government. In order to realize such moderation, each power should be exercised by a different organ of government and among the various organs of government, there should be a system of checks and balances so that one organ might not become all-powerful.

In every state, there are three kinds of powers:

The chief function of the legislature is to enact laws.

The executive is the organ that implements the laws enacted by the legislature and enforces the will of the state.

The judiciary is that branch of the government that interprets the law, settles disputes, and administers justice to all citizens.

When the legislative and executive powers are united in the same persons or in the same body of magistrates there can be no liberty, because apprehensions may arise, lest the same monarch or separate should enact tyrannical laws and execute them in a tyrannical manner. There is no liberty if judicial power is not separated from the legislative and executive. Where It joined with the legislative, the life and liberty of the subject would be exposed to arbitrary control, for the judge would be then the legislator. When it joined the executive power, the judge might behave with violence and oppression.  Hence, the importance of the Separation of Powers doctrine can be summed up as follows:

Article of the constitution that suggest separation on of Powers:

Article 50: This article puts an obligation on the State to separate the judiciary from the executive. But, since this falls under the Directive Principles of State Policy, it is not enforceable.

Article 123: The President, being the executive head of the country, is empowered to exercise legislative powers (Promulgate ordinances) in certain conditions.

Articles 121 and 211: These provide that the legislatures cannot discuss the conduct of a judge of the Supreme Court or High Court. They can do so only in case of impeachment.

There is a system of checks and balances wherein the various organs impose checks on one another by certain provisions.

In India, a separation of functions rather than of powers is followed. Unlike in the US, in India, the concept of separation of powers is not adhered to strictly. However, a system of checks and balances have been put in place in such a manner that the judiciary has the power to strike down any unconstitutional laws passed by the legislature.

Today, most of the constitutional systems do not have a strict separation of powers between the various organs in the classical sense because it is impractical. The makers of the American Constitution were conscious of the impossibility of applying an absolute separation of powers. Hence, they incorporated another theory known as the “Theory of Checks and Balances”. They thought if the principle of separation of powers is carried too far, it would make the Constitutional system unworkable Hence, they devised a system of check upon each other so that none can become tyrannical. The principle is designed to bring about an overall equilibrium and to prevent the tendency of each branch of government to become autocratic and irresponsible in its own particular field. In order to prevent the abuse of power on the part of any organ of the government, the other two have been given the power to act like checks. This means that no branch of government has unlimited powers even in its own sphere.

Relation between Legislature and Judiciary

Even though the functions of the executive and the judiciary are well-defined in the Constitution, the system of checks and balances ensures that each one can impose checks on the other.

The judiciary can strike down laws that it considers unconstitutional or arbitrary.

The legislature, on its part, has protested against judicial activism and tried to frame laws to circumvent certain judgments.

Judicial activism is said to be against the principle of separation of powers.

There have been instances where the courts have issued laws and policies through judgments. For example, the Vishaka Guidelines where the SC issued guidelines on sexual harassment.

Relation between Legislature and Executive

The Constitution states that the executive branch of the State (Council of Ministers) shall be collectively responsible to the Legislature (Lok Sabha). This implies that the Parliament should supervise the work of the government and hold it accountable for its actions.

The parliament makes laws in general broad terms and delegates the powers to the executive to formulate detailed policy and implement them.

Relation between Executive and Judiciary

There are several provisions in the Constitution that make the judiciary independent. This is because, it is believed that for a democracy to remain efficient and effective, the judiciary must be independent. The judiciary is said to be the guardian of the constitution. If the executive also assumes judicial powers, that sort of a government tends to become oppressive.

However, there are some judicial functions which are performed by the executive as well. They are:

The appointments of the judges are made by the executive.

The President and the Governors also enjoy the power to pardon, reprieve, etc. These are direct judicial functions.

The judiciary also performs some executive functions. It can review the actions of the executive and declare them void if found unconstitutional.

Separation of Powers in other countries

Separation of power in the USA

The vesting clause in Article II places no limits on the Executive branch, simply stating that “The Executive Power shall be vested in a President of the United States of America.

Separation of power in England

The Supreme Court holds “The judicial Power” according to Article III, and it established the implication of Judicial review in Marbury v. Madison. Checks and balances allow for a system-based regulation that allows one branch to limit another, such as the power of Congress to alter the composition and jurisdiction of the federal courts.

The Commonwealth of Australia Constitution Act, 1900 clearly demarcates the boundaries of the three organs and therefore provides for a very rigid separation of powers.

Similarly, the French Constitution also provides for separation of powers and divides the national government into the executive, the legislative, and judicial branches.