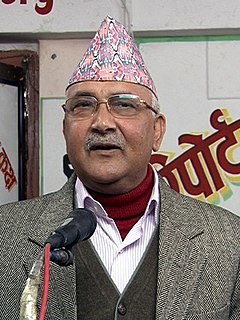 Vanshika Arora is a first-year B.A.LLB student at Army Institute of Law, Mohali.

The most recent development in Nepal politics has been the announcement of a fresh election by President Bidya Devi Bhadari, when KP Oli lost the vote of confidence in parliament under Article 76(5) of the constitution. Article 76(2) of the constitution of Nepal states that any leader is required to furnish proof of majority in the House of Representatives, failing which the President can invoke Article 76(3), which requires the leader of the largest party to form the government by proving majority in the house. KP Oli, being the leader of the largest party, failed to claim a majority. This is the second time that the parliament of Nepal has been dissolved in a year. Earlier, it was dissolved in December 2020 by the incumbent KP Oli. This is when the Supreme Court reinstated the parliament, in February 2021. The political uncertainty has caught the world’s eye view since it has been happening amidst the repeated coronavirus waves. The Nepalese parliament has not been in regular functioning since it was dissolved last year, leaving the socio-economic management of COVID in silos.

The story begins with the formation of NCP (Nepal Communist Party), in 2018. The NCP was formed by the merger of two parties, namely Communist Party of Nepal- Unified Marxist Leninist (CPN-UML) and Communist Party of Nepal (Maoist Center). The NCP later split into two factions, the CPN-UML led by KP Oli and the Maoist Center led by Pushpa Kamal Dahal, also known as Prachanda. Only a few months later, a Supreme Court judgment declared the NCP unconstitutional and revived the original parties, also declaring that NCP belonged to Rishi Kattel (another communist leader).

The Supreme Court judgment rendered CPN-UML as the largest party in parliament with 121 seats. Normally, this would mean an end to the political crisis in Nepal. However, a lack of solidarity and internal factionalism within CPN-UML has led the country into two parliament dissolutions within six months. The primary faces of these internal factions are Madhav Kumar Nepal, Jhala Nath Khanal, and Pushpa Kamal Dahal against KP Sharma Oli. The Dahal faction claims to have 90 seats, leaving Oli with 84 seats at his disposal. seeking support outside of the party, Oli approached the fourth largest party of Nepal, Janata Samajbadi Party- Nepal (JSPN), that garnered 32 seats. Prachanda on the other hand, reached out to Nepali Congress led by Sher Bahadur Deuba, which had 63 seats.

The JSPN support to Oli does not come unconditionally. The JSPN Madeshi leader Upendra Yadav has been promised seven seats and reverse in constitutional provision which denies citizenship to children born of Nepali mothers with foreign husbands. Therefore, this provision has been set aside by an ordinance. Oli was in support of this provision since the absence of it would allow Indians to marry Nepali women, and have children who could be Nepali citizens.

Some rumors claim that Oli has affirmed the BJP government in India, that he shall drive Nepal into a Hindu Rashtra and work closely with RSS. Such speculation has arisen after the recent visit of a former Nepali king to the Kumbh Mela.

The political situation in Nepal has not been stable for a long time. The 2018 elections were a ray of hope, for political stability and a government to last up until 2023. However, internal factionalism has proved hazardous for the Nepalese democracy. For Nepal to revive its monarchy, it is essential for the country to retain political and constitutional stability.