Pakistan-India Trade Ties: Present and Past 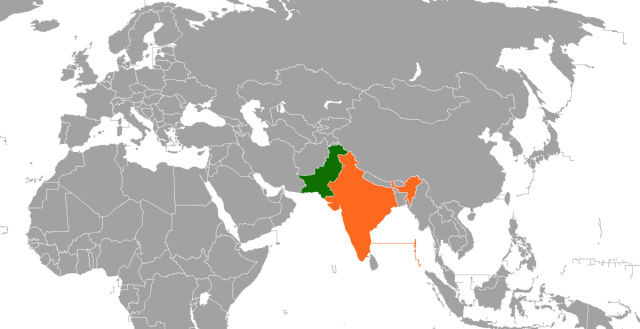 The article is written by Faraz Ahmed, a graduate of law from International Islamic University.

Trade relations between India and Pakistan have never been smooth, both the countries have faced ups and downs, hurdles are created to bring the commerce to a halt. Two years back in 2019, Pakistan suspended its trade ties with India after New Delhi imposed direct control over the part of Kashmir India administers and revoked its constitutional status. Pakistan decided to continue the trade boycott until India revives the special constitutional status of Kashmir valley.

Recently, Pakistan’s Economic Coordination Committee (ECC) has lifted the 20 months long trade suspension in a very restrictive manner and allowed some private enterprises to import few commodities such as wheat, sugar, and cotton as the country is suffering from food shortages and very high inflation rate. Finance Minister Hamad Azhar stated that lifting trade restrictions is only to cop the soaring domestic prices of commodities and bring the price rate under control. Shortly after the decision, Prime Minister Imran Khan is heavily slashed by the opposition parties for his unanimous decision of partial resumption of trade with India without taking the parliament into confidence as the Kashmir dispute is still lingering on; whereas, PM stated that Pakistan stands firm on its narrative and shall not resume the trade until New Delhi revives the special constitutional status of Kashmir.

On the other side, India has shown willingness to resume trade with Pakistan and placed the onus of restoring trade ties on Pakistan since the latter had unanimously suspended the bilateral trade relations. Minister of state for commerce and industry Hardeep Singh Puri has stated that India desires normal relations, including trade with all countries, including Pakistan. Pakistan unilaterally suspended bilateral trade with India in August 2019. It is for Pakistan to review its unilateral measures on trade relations.

The Indo-Pak trade relations are not new and have not been the same always. At some point in time, these bilateral relations were at their peak as well. After both countries got independence from their colonial father- the British- signed a general treaty on trade GATT (General Agreement on Tariffs and Trade) on October 23, 1947. Founding fathers of both the countries have envisaged amicable relations between the two nations. M.A. Jinnah, the founding father of Pakistan, had a very positive vision for Pakistan-India relations. He believed that the two states would co-exist in peace and harmony like the United States and Canada. However, situations didn’t turn out to be favorable for these neighboring countries. At first, forced cross-border migration from both sides resulted in communal violence, and tragically over a million of the 14.5 million who decided to move in either direction lost their lives. Additional to this bloodshed and mayhem, the annexation of princely states particularly, the dispute over Jammu and Kashmir created deep suspicions, and over the years this issue has remained the hindrance between Indo-Pak trade ties that are contingent upon resolving this outstanding issue.

Despite these territorial conflicts, the political leadership of both countries has kept the trade and economic issues separate from politics. In 1948–49, Pakistan’s exports to India accounted for 56 percent of its total exports, while 32 percent of Pakistan’s imports came from India. The two countries were trading normally during this turbulent period. India was Pakistan’s largest trading partner, and this continued to be the case until 1955–56. Between 1948 and 1965, Pakistan and India used several land routes for bilateral trade. These included eight customs stations in Punjab province and three custom check posts in Sindh. Pakistan and India, invoking Article 24/paragraph 3(a) of GATT, even signed a bilateral agreement on December 22, 1957, to facilitate border trade. From 1947 to 1965, Pakistan and India entered into 14 bilateral agreements related to trade facilitation. These agreements covered avoidance of double taxation, trade in goods, food items, trade facilitation, border trade, air services, and banking. An example of amicable relations between these two nations is present when Pakistan exported grain from Sindh to deficit provinces of India, and India exported flour to East Pakistan. Both Pakistan and India had bank branches in each other’s countries. In 1965, there were nine branches of six Indian banks operating in Pakistan. Pakistan’s Habib Bank had a bank branch in Mumbai.

In the year 1965, all things changed abruptly. The unresolved Jammu-Kashmir conflict had resulted in a war between the two nations. Customs officers at Wagah post near Lahore became the first civilian prisoners of war, and banks in both countries were seized as enemy properties. This time trade and economic ties could not last and become the casualty of war. There was a trade embargo between India and Pakistan after the war of 1965, and it continued till 1974. During this period, several efforts were made to revive the trade, but nothing tangible could be achieved.

In 1972, the Simla Agreement was signed between Pakistan and India. Under this agreement, trade resumed on a limited scale in 1974. Both countries worked on positive lists, which expanded incrementally over the years. In November-December 1981, Pakistan joined the Delhi International Trade Fair. Thereafter, the exchange of trade delegations between the two neighbors occurred in quick succession. In June 1983, a Joint Business Commission was constituted, with the leading objective to accelerate the decision-making process on matters seeking government approval and suggesting new items for bilateral trade. In 1986, India and Pakistan became signatories to the final document of the South Asian Association for Regional Cooperation (SAARC) which committed itself to promote the welfare of the people of South Asia. In July 1989, Pakistan agreed to import 322 Indian items. The installation of the Nawaz Sharif Government in 1991 also boosted Indo-Pak trade, and trade touched Rs. 5225.9 million in 1992-93 from Rs.1680.9 million in 1990-91. South Asian Preferential Trading Arrangement (SAPTA), concluded in December 1995, introduced an integrative trading arrangement in the region. At the end of three rounds of trade negotiations, a total of 5550 tariff lines had been included for tariff concessions. In 1996, India accorded Most Favored National (MFN) status to Pakistan. In the same year, Pakistan increased its positive list to 600 items that may be imported legally from India. In 2003, Pakistan’s Prime Minister announced the inclusion of another 78 items to the positive list. Most of the permissible items include chemicals, minerals, and metal products. Commodities such as cardamom and tea still have high tariffs. In 2003, India’s trade complementarity index (TCI) was 50 percent, while Pakistan’s TCI with India was only 14 percent. India’s TCI with Pakistan was highest in 2007, and Pakistan enjoyed the highest TCI in 2010, thus improving its complementarity with India. In March 2006, during the 3rd round of Composite Dialogue process discussions, both countries agreed to discuss the new shipping protocol, the deregulations of air services, the joint registration of basmati rice, an increase in the size of Pakistan’s positive list, proposals for information-technology-related medical services and export insurance by India, and work on a memorandum of understanding for cooperation in capital markets by Pakistan. In November 2011, during the 6th Round of Commerce Secretary Level Talks at New Delhi, both countries agreed to develop mechanisms to address issues of Non-Tariff Barriers. The two countries initiated three agreements i.e., Customs Cooperation Agreement, Mutual Recognition Agreement, and Redressal of Trade Grievances Agreement. In November 2011, Pakistan decided to grant the Most Favored Nation (MFN) status to India to boost bilateral trade.

While concluding my write-up, I must say that both countries have the right opportunity to end their past tensions and move forward with new hopes and aspirations to build an economically powerful bilateral relationship. Both countries should create an atmosphere of peace to boost trade. Investment and major ventures can take place in a big way if both sides can create an enabling political environment of peace, trust, and confidence. The major beneficiary of this bilateral trade is the consumer who receives the products at low costs as the production cost of goods is very low.