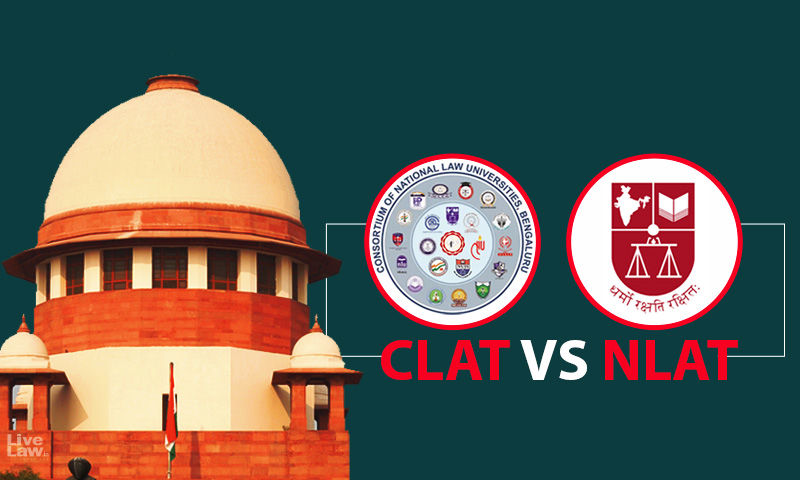 This article has been written by Khan Mahe of Rizvi Law College, Picture credits to Livelaw.in

A brief analysis about the Newly added national law entrance exam (NLAT) by National Law School of India University (NLSIU)which has created a lot of chaos between the students and exam conducting bodies ,and in detail about CLAT vs NLAT and Aftermath.

National Law Aptitude Test (NLAT)   is an online home-based test for admissions to undergraduate and postgraduate courses at the university. Due

to constant postponement of CLAT which is a common entrance test for all the students willing to opt national universities for further studies and due pandemic has created immense confusion for the entrance examination tests of various universities, The National Law School of India University (NLSIU), Bangalore Decided not to entertain CLAT as an entrance exam but to conduct their own inhouse exam name as  NLAT ,The authorities involved believed  that If admissions are delayed beyond September , it will  inevitably lead to a ‘Zero Year’ where no admission can take place, NLSIU’s follows a trimester system which means every academic year is made up of three terms, each of 90 days’ duration Thus it would deprive law students of the opportunity to pursue their studies this year at India’s premier law university, However later on it was decided that NLAT will be conducted fully online on 12th of September and on 14th of September for the students who had faced technical difficulties and challenges in the first exam The duration of the exam for BA LLB will be 45 minutes, and included 40 multiple choice questions; meanwhile, PG paper was of 40 minutes and included 30 questions, which will be given through laptops/mobile phones would require high  internet connections .

With the  Announcement a lot debates about CLAT vs NLAT has risen as to why to conduct a separate entrance by dropping CLAT ,Moreover the university in its press release has made it clear that They’re  completely separating from CLAT 2020 and no member from the NLSIU, including the Vice Chancellor, who was the Secretary-Treasurer in the CLAT General Body, will participate in CLAT 2020 in any manner  ,conducting a separate test outside the Consortium, multiple judgments have held that Courts can still intervene if entrance tests are found to be unfair or lacking transparency, though both Both NLAT and CLAT focus on the candidate’s reading, critical thinking and analytical skills , the real problem arises in the weightage of negative marking scheme, NLAT exams each question carries 2 marks and an incorrect answer will invite a penalty of 0.50 marks. Even for an unanswered question, there is a negative marking of 0.25 marks. Which means, the students have to answer all questions.However in the CLAT marking scheme is different from NLAT; each question of the CLAT question paper carries one mark and an incorrect answer invites a penalty of 0.25 marks. Importantly, there is no negative marking for unanswered questions in whatever way the NLAT doesn’t allow students to revisit the questions that have been answered once. However in CLAT there’s  the sectional navigation including revisiting a question is allowed. NLSIU took a Audacious approach towards conducting an home based examination while CLAT will always be centered based exam as usual ,the university has faced prevalent backlash from renowned academics, students, lawyers, and across the media for its exclusionary and onerous technical requirements to conduct the exam. Students’ rage has reached to the doors of Jharkhand High Court wherein students have filed a writ petition against NLSIU holding NLAT 2020

Aftermath of debates and petitions SC gave the order to conduct the but not to declare the results, besides on  12th September ,more than 94% of students appeared for the exam, however many students who appeared in the exam have expressed their dissatisfaction with the way the exam was conducted at home, they not just faced the technical difficulties ,verification failure but also new cheating methods was circulated, in addition to this the examination got submitted on its own well before the stipulated ending time. Surprisingly, this happened with a lot of candidates, and also Options provided weren’t getting selected properly however, Multiple clicks were required to get one option selected which has consumed a lot of students time ,in the midst of all issues, students tried calling the helpline number. Which wasn’t picked up and in some cases which was not useful.  As according to the Notification, applicants who successfully appear for the test will be individually informed of their result via text message/ email however the university has declined to publish a consolidated merit list of students ,furthermore many students expressed their dissatisfaction on social media and urged the university for reconducting of exam, They criticized the exam body for not employing Artificial Intelligence and human-based proctoring to prevent the cheating mechanism and demanded Due to exam organizer’s mistakes potential errors in the merit list must be rectified to ensure complete fairness ,The Supreme court Court heard pleas against the issue concerned which contained termed holding of separate examination as “manifestly arbitrary and illegal decision and the sudden and capricious decision of the NLSIU has not only thrown the aspirants of CLAT 2020 into frenzy and in a state of fear and confusion, it has also severely jeopardized the position of the university in the Consortium. Due to the whimsical conduct of the University, the children are put to extreme pressure and mental stress however The matter is kept before SC for verdict on 21st September.

Meaning, Nature and Concept of Jurisprudence
Admission of Evidence by Accomplice Witness under the Indian Evidence Act
Rights and Duties of Indemnifier and Discharge