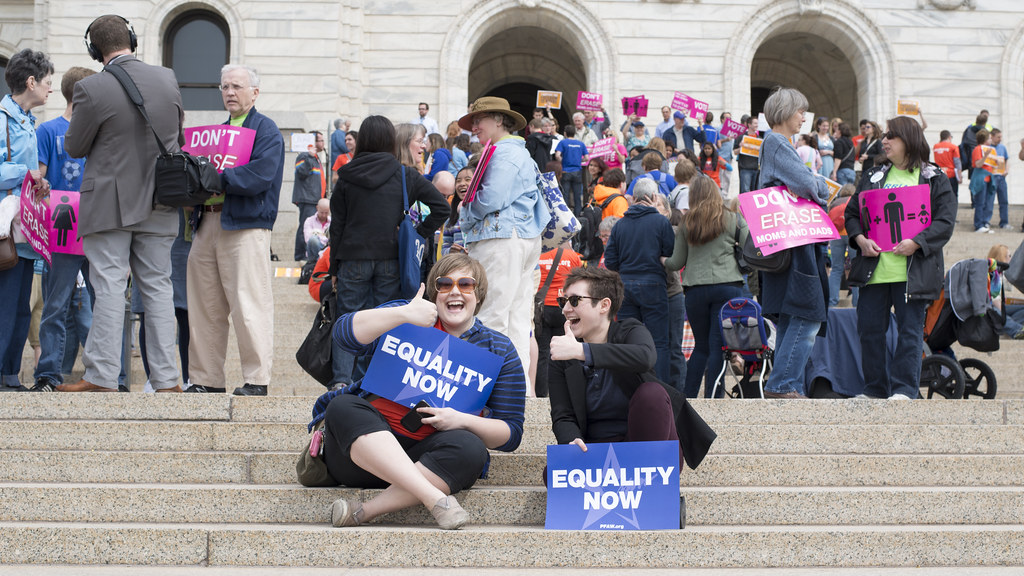 This article is written by PRANIT BHAGAT pursuing B.A LLB from ILS Law College, Pune. In this article, he has discussed Same-Sex Marriage and its impact on the Institution of Marriage in India and around the world.

Same-sex marriage can be defined as the practice of marriage between two men or two women. Basically, it is the marriage between individuals of the same gender. Same-sex marriages are being regulated through law, religion, and customs in the majority of countries around the world but the legal and social responsibility of the same has varied from celebration on one hand to criminalization on the other. Some scholars argued that same-sex unions were recognized by the Roman Catholic Church in medieval Europe, although others have disputed to this claim. Scholars and the general public have become interested in this issue during the late 20th century, a period where attitudes toward homosexuality and laws regulating homosexual behaviour were liberalized, particularly in Western Europe and the United States. This issue of same-sex marriage sparked the emotional and political clashes between supporters and their opponents frequently but during the early 21st century, several jurisdictions have legalized same-sex marriages both at the national and sub-national levels. While in other jurisdictions, Constitutional measures have been adopted to prevent same-sex marriages from being sanctioned, or laws were enacted that refused to recognize any such marriages being performed elsewhere. The same acts were evaluated differently by various groups indicating its importance as a social issue in the early 21st century. It has also demonstrated the extent to which cultural diversity persisted both within and among countries.

The Swiss legal historian Johann Jakob Bachofen (1861) and the American ethnologist Lewis Henry Morgan (1871) analyzed the earliest systematic of marriage and kinship. An enormous variety of marriages and sexual customs across different cultures were documented by such scholars by the mid-20th century. Notably, It was found that almost all cultures expressed an ideal form of marriage and an ideal set of marriage partners but are practicing flexibility in the application of those ideals. The most common forms of documented are

• Morganatic marriages: Titles and property are not passed to the children.

• Exchange marriage: A sister and a brother from one family marry a brother and a sister   from another; and

• Group marriages based on polygyny (co-wives) or polyandry (co-husbands).

Ideal matches for marriages are those between cross-cousins, between parallel cousins, to a group of sisters (in polygyny) or brothers (in polyandry), or between different age sets. There is an exchange of some form of surety in various cultures such as bride service, bridewealth, or dowry and is considered a traditional part of the marriage contract. Cultures that openly accept homosexuality are generally of non-marital categories of partnership in which bonds could be expressed and socially regulated. Other cultures have denied the existence of same-sex intimacy or at least deemed it an unseemly topic for discussion of any sort.

Same-Sex Marriage and the Law

Various Societies have resolved the twirl issues of sexuality, reproduction, and marriage in multiple ways. Also, the responses regarding morality, desirability, and administrative perquisites of same-sex partnerships have been equally diverse. By the beginning of the 21st century, most of the countries decided to opt for one of only three legally available resolutions to these problems-

• Grant them a similar or equal status like that of heterosexual marriage.

Many countries are yet to reach a consensus on these issues. Unfortunately, a lot of societies chose to ignore the problem of same-sex marriages by treating their intimacy as a subject unsuitable for discussion. The jurisdictions of many countries actively criminalize same-sex unions and consider homosexuality and lesbianism as mental disorders. In such societies, the possibility of arrest or institutionalization further reinforced taboos on same-sex intimacy and discussions thereof, typically driving such activities underground. However, the biologically-based theories for the cause of sexual orientation are favoured by most experts, who point to genetic factors, the early uterine environment, or both combinations, biological research has shown that it is an example of a normal and natural variation in human sexuality, and is not in the control of an individual.

In India, homosexuality has been a taboo for a very long time. Marriages are considered to be a holy sacrament by Hindus and consider same-sex attraction and intimacy to be immoral and inappropriate. Most of the marriages are seen from a religious angle where gay marriages are believed to be unholy and against God himself. Many Indians presume this concept of same-sex unions has been brought by the Western countries and it is their influence leading to this rise in the country. However, homosexuality is not a concept devised by the West, as many who oppose this notion belief. References of homosexuality can be found in our ancient literature and scriptures, which reflect that the concept was prevalent in our society since ancient times. Many historical shreds of evidence of literature show that homosexuality has always been prevalent across the Indian subcontinent since ancient times.

This section was introduced in India during the British rule which criminalized sexual activities against the order of nature. Consensual homosexual activities are also criminalized under this section.  However, In the case of Naz Foundation v. Government of NCT of Delhi, a landmark judgment was passed by the Delhi High Court decriminalizing homosexual intercourse between consenting adults. This section was adjudged to violate the fundamental right to life and liberty and the right to equality as guaranteed by the Constitution of India. The petitioner filed a lawsuit in the Delhi High Court for granting legislation of homosexual intercourse between consenting adults. However, The Court refused to entertain their petition as it said the petitioner had no locus standi in the matter. On further appeal to the Supreme Court, the SC held that Naz Foundation had the locus standi to file a Public Interest Litigation in this matter, and the case was sent back to the Delhi High Court. An affidavit stating that the enforcement of Section 377 violates LGBT rights was filled by the National AIDS Control Organisation in 2006. A Delhi-based coalition of LGBT, women’s and human rights activists called “Voices against 377” had significant intervention in this case for supporting the demand to at least read down section 377 to exclude adult consensual sex from its purview. On 2 July 2009, a bench comprising of Chief Justice Ajit Prakash Shah and Justice S. Muralidhar held that Section 377 of the Indian Penal Code was in violation of the fundamental right to dignity and privacy within the right to life and personal liberty guaranteed by Article 21 of the Indian Constitution. Also, the Court also held that Section 377 was against Article 14 and 15 of the Constitution, as it discriminated against homosexuals and created a class, discriminating against them on the basis of sex. The Court held that the word ‘sex’ in Article 15 not only includes biological sex but also the sexual orientation of a person. The Court also observed that the right to life under Article 21 includes the right to health, and concluded that Section 377 is an impediment to public health because it hinders HIV-prevention efforts. This judgment saw many gay parades and festivals in the city, rejoicing and celebrating the Delhi High Court decision. The judgment can be seen as a pioneering step in advocating the rights of homosexuals.

Citizens of our country have a choice to get married under their various personal laws, or through a common law of civil marriage. While none of the acts have explicitly defined marriage as a union between a man and a woman, it has been interpreted and understood to mean that a marriage is always between a man and a woman. Words like ‘bride and bridegroom’, ‘husband and wife’ imply that the laws are valid only for couples of the opposite sex. The Hindu Marriage Act, 1955, is applicable for Hindus, Sikhs, Jains, and Buddhists. Section 5 of this Act says that a marriage may be solemnized between any two Hindus if the bridegroom has completed the age of twenty- one year and the bride the age of eighteen years at the time of the marriage. Also, Section 60 of the Indian Christian Marriage Act, 1872, says that the age of man intending to get married should not be under twenty- one year, and the age of the woman intending to get married should not be under eighteen years. Thus, both these legislations have heterosexist underpinnings. In the case of Muslims, they are governed by Islamic Law itself, rather than any codified law of the Parliament. As per Islamic law, marriage is a contract, and the purpose of marriage is to legalize sexual relations between a man and a woman, for the procreation of children. Marriages between individuals from different religions and castes are allowed under The Special Marriage Act, 1954. Thus, India does not have any legislation that legalizes same-sex marriages. However, a major step towards changing the perception of same-sex unions in India was made through Delhi High Court’s landmark judgment in Naz Foundation v. Government of NCT of Delhi.

Same-Sex relationships in India and around the world

The Netherlands was the first country in the world to legalize same-sex marriages, way back in 2001. Such unions got legal recognition in Belgium and Spain in 2003 and 2005, respectively. Canada legalized same-sex unions in 2005, South Africa in 2006, and Norway in 2009. Portugal, Iceland, and Mexico legalized gay marriages in 2010, and since 2012, Denmark and Caribbean Netherlands gave it the legal nod. Since 2013, New Zealand, France, Brazil, and Uruguay have also legalized same-sex unions. In India, same-sex marriages have not been legalized, however, few celebrities have entered into same-sex civil partnerships. Writer Vikram Seth has openly admitted the truth about his sexual orientation, calling himself gay. Prince Manvendra Kumar Singh Gohil, from the royal family of the former princely state of Rajpipla in India, is the only known person of royal lineage in modern India to have publicly revealed that he is gay.

Judicial Review
Kelsen's Pure Theory of Law
Advocate Akriti Shikha on Importance of Internship and her Experience at L&L Partners and Reliance C...

2020-05-27
Previous Post: Fundamental Rights and Doctrines of Eclipse, Severability and Waiver
Next Post: Legitimisation or Criminalisation of Same-Sex Marriages?