Introduction and Kinds of Negotiable Instrument 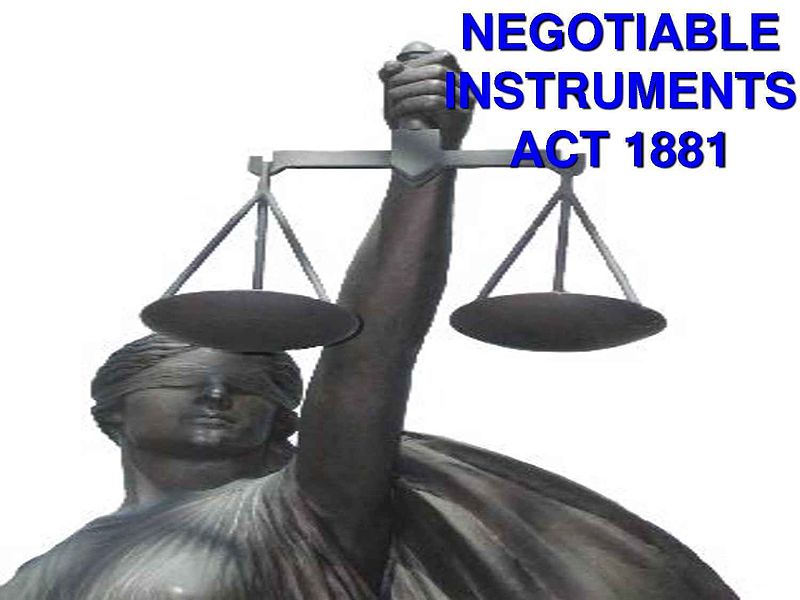 This article is written by Gaurav Lall pursuing BBA LL.B. (Hons.) at United World School of Law. The article speaks about a brief introduction and kind of negotiable instruments under the Negotiable Instrument Act, 1881.

The aspect of present-day business activities added to the development of more current methods for encouraging financial-based transactions. Already, money was the most widely recognized mode of trading products and services for their value. The introduction of negotiable instruments has acquired, radical changes in business activities nowadays. A Negotiable Instrument is that document which includes a ‘promise to pay’ a certain amount of money to the bearer of the document. It is a mode of transferring a debt from one person to another. These are the documents which carry exchangeable value and have wider acceptability. Through this, it can be concluded that the two most important characteristics of a negotiable instrument has value and are easily exchangeable. In India, the negotiable instruments are governed by the Negotiable Instruments Act which was enacted, in India, in 1881. According, to Section 13 of Negotiable Instruments Act, 1881 a ‘negotiable instrument’ means a promissory note, bill of exchange or cheque payable either to order or to bearer. Before its enactment, the provisions of the NI Act were applicable in India, and the present Act is also based on this act with certain modifications.

Characteristics of a Negotiable Instrument

Uninhibitedly transferrable: The property in a negotiable instrument gets moved by a straightforward procedure of conveyance in the event that it is payable to conveyor, support and conveyance or payable to order.

Recuperation: One can sue upon the instrument in his own name.

Assumption as to consideration: These instruments are dared to have been made, drawn, acknowledged, supported, arranged or moved for thought.

Holder’s free from all imperfections: The holder (one who gets the instrument in compliance with common decency and for consideration) at the appointed time gets title free from all deformities.

Assumption as a holder: Every holder of negotiable instrument is ventured to be holder at the appointed time.

The promissory note is a marked record of written guarantee to pay an expressed sum to a specified individual or the bearer at a predefined date or on request. It is a written instrument containing a genuine standard marked by one party to pay a specific entirety of cash just to, or to the request for someone in particular or to the bearer of the instrument. Thus, a promissory note contains a guarantee by the debtor to the creditor to pay a specific amount of cash after a specific date. The debtor is the creator of the instrument.

“Section 4 of the NIA defines promissory note is as an instrument in writing (not being a bank-note or a currency-note) containing an unconditional undertaking signed by the maker, to pay a certain sum of money only to, or to the order of, a certain person, or to the bearer of the instrument.”

Bills of Exchanges are similar to promissory notes where one party promises to pay the sum of money to another party or to any other person in his order on a fixed future date. Just like a promissory note, business people use it to provide short-term trade credits to their business partners. The person on whose name it is endorsed (drawee) will have a valid claim on the bill writer (the Drawer) for the amount mentioned on the bill. In case of the urgency of a fund, the drawee can discount his bill before the due date from any bank and get the bill amount from the bank after deducting some discount on it and after that bank will collect the full billing

Cheques are the substitute of the monetary standards and a very safe mode of transfer of payments among the merchants or dealers. It can either be a cheque holder and one who possesses that will get the amount mentioned on it or an account payee cheque endorsed in the name of the particular entity. In contrast to currencies, it generally has a particular expiry date and henceforth can’t be stored for a longer time period. It has no risk of stolen unless, a bearer of cheque. It generally takes time to transfer funds in the accounts of the recipient and hence it is considered as the less liquid form of transfer.

“Section 6 of the Negotiable Instrument Act (NIA) defines a cheque is a bill of exchange drawn on a specified banker and not expressed to be payable otherwise than on demand.”

Today, in the modern business world Negotiable Instrument plays a significant role as well as advantageous mode of settling account. A negotiable instrument is a special type of contract for payment of money which is unconditional and capable of transfer by negotiation. It make the economy goes round. The law identifying to negotiable instrument for instance, negotiable instrument Act 1881 has a tremendous importance as considerable amount of litigation in Indian courts which revolve around this sphere.