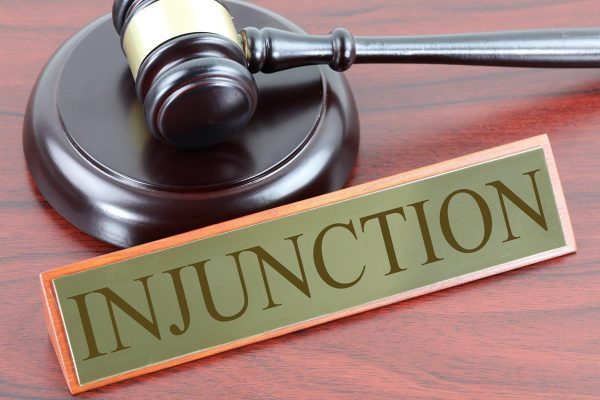 This article is written by K.Lasya Charitha pursuing BALLB in Damodaram Sanjivayya National Law University, Visakhapatnam. In this article, the researcher discusses the meaning, types of Injunctions, and few case laws related to injunction.

Any appeal to the courts without remedy is futile. Anyone who goes to court for past or current injuries must first make sure to exhaust their preferred relief measures of seeking damages. If the court grants redress by ordering a specific person or a group of people to do or refrain from doing something. This repair can take several forms. In the vast majority of tort claims, the plaintiff is seeking financial compensation (damage) for the damage suffered. This fact is emphasized in the distribution or redistribution of the loss. However, in many cases, the plaintiff tried to take injunctive measures to prevent future damage in that area.

An Injunction is an order given by the court restraining a specific person or a group of people from doing or not doing a specific act.

The Injunction is a discretion of the court, and failure to do so may lead to contempt of court. In the past, injunctions were given only when “when the remedy at law is inadequate”.

Illustration: Suppose you have a house surrounded by trees that are hundreds of years old, and your neighbor claims that these trees are their property and plans to cut them down. While the dispute is pending, the court can issue an order of Injunction prohibiting neighbors from cutting trees until the problem is fully resolved. Otherwise, it may cause irreparable damage to the land. Money loss cannot replace trees, and the loss you deserve may be speculative.

Injunctions are divided into two categories:

Based on the Time Period

They are granted on the basis of a prima facie case without objection until the case is reviewed and a decision is made on the matter. For example, it may be necessary to prevent fraudulent confiscation or confiscation of property or illegal confiscation of the disputed property. This can help maintain the status quo.

(a) If it is determined by an affidavit or other means in any legal process-the property is at risk of waste, damage, or transfer by either party to the suit, or

(b) the defendant threatens or intends to take or dispose of Property to deceive its creditors.

(c) If the defendant threatens to deprive the plaintiff of any disputed property, the court may issue a temporary injunction or through its order to protect and prevent waste, damage, alienation, sale, removal, or sale of the property. This is the subject of a legal dispute. In a legal dispute, the court considers this appropriate until the court resolves the dispute or issues a new order.

In any action aimed at preventing the defendant from breaching the contract or any other form of any damage, regardless of whether the claim is seeking compensation, in any case, the plaintiff can, after the commencement of the proceedings and before or after the judgment, can seek an injunction from the court to prevent the defendant from committing a breach of contract, or similar violations from the same contract or related to the same property or rights. The court may issue an injunction, according to the validity period of its order to keep records, make a guarantee, or in any other manner determined by the court.

If the defendant infringes or threatens to infringe or use the plaintiff’s property rights, the court may give permanent injunction indefinitely under the following circumstances:

(b) If the intrusion is such that monetary compensation cannot provide sufficient relief;

(c) When is it necessary to take preventive measures to prevent multiple disputes.

Based on the Nature of the Order

Injunctions can be “prohibitory” or “mandatory”, the former prohibits any behavior and shall comply with the provisions of section 38, while the second requires the defendant to take specific actions described in section 39. If the defendant illegally built the separation wall by infringing on the plaintiff’s land and may continue to act further. The court can order to remove the wall with a mandatory injunction and not to construct the wall any further through a prohibitory injunction.

Circumstances of  Granting and Refusing Injunctions

The grant of injunction is completely based upon the discretion of the court, and the court can consider various factors, such as expediency, the possibility of appropriate remedies, the behavior of the parties, and the ability to enforce judgments to approve or deny its application. The court can enforce certain actions by mandatory injunction. According to the injunctions, the court can order the demolition of illegal highway buildings or stop activities that cause inconvenience or prohibit the making of potentially defamatory statements. So, we can say that an injunction can be used as relief for claims under torts law as we have seen in the above examples that the court can issue an injunction in various civil matters.