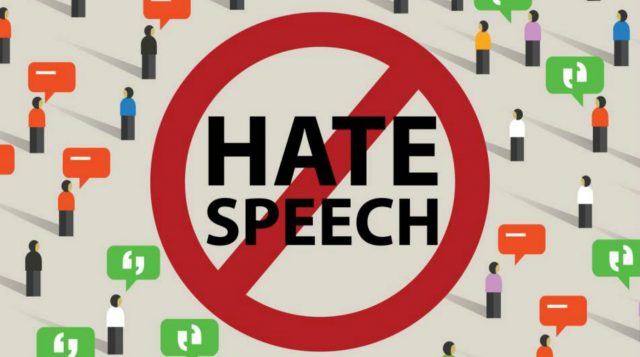 This article is authored by Sanskriti Goel , a 1st year law student from Chanderprabhu Jain College of Higher Studies and School of law, GGSIPU. This article deals exhaustively with constitutional law, criminal laws, election laws and IT laws in context of hate speech.

“There is a fine line between free speech and hate speech. Free speech encourages debate whereas hate speech incites violence.”

What is Meant by Hate Speech

The Black’s Law dictionary defines hate speech as—“Speech that carries no meaning other than the expression of hatred for some group, such as a particular race, especially in circumstances in which the communication is likely to provoke violence.”

The Law Commission of India, in its 267th report, defined hate speech as —“Hate speech generally is an incitement to hatred primarily against a group of persons defined in terms of race, ethnicity, gender, sexual orientation, religious belief. Thus, hate speech is any word written or spoken, signs, visible representations within the hearing or sight of a person with the intention to cause fear or alarm, or incitement to violence.”

The right to freedom of speech and expression is recognised as a core right all across the globe. With modernisation, the world was gifted with internet, the purpose of which was to connect people with their loved ones. But unfortunately, some people use it to spread hatred. In today’s world, the ideas that we share and the words that we speak spread like wildfire.

The ‘public order’ restriction saves majority of hate speech laws from unconstitutionality in India. In landmark judgement of Ramji Lal Modi v. The State of UP (1957 AIR 620), the Hon’ble Supreme Court of India upheld Section 295A of the Indian Penal Code, 1860 and observed that a law may not directly deal with public order , it could be read as in ‘interest of public order’.

The Code of Criminal Procedure and Hate Speech

Following sections of the Code of Criminal Procedure, 1973 (CrPC) deal with hate speech:

(1) Section 95 and Section 96 authorise the state government to forfeit any ‘book, newspaper or document’, the publication of which is punishable under Section 124A, section 153A, Section 153B, Section 292, Section 293, and Section 295A of the IPC.

(2) Section 196 acts as a procedural safeguard against frivolous prosecution for hate speech offences, such as those under Sections 153A, 295A, 505 and 153B of the IPC.

The Representation of the People Act, 1951

The Representation of the People Act, 1951 (RoPA) contains the laws that regulate the conduct of elections in India.

Following section of the Information Technology Act, 2000 (IT Act) deals with hate speech:

M/s. Haridas Exports versus All India Float Glass Mfrs. Association & others
Speedy Trial In Rape Cases: Its Importance and Prevalent Loopholes
AN OVERVIEW OF ANTICIPATORY AND ACTUAL BREACH OF CONTRACT