Freedom of Speech & Expression- The Pulse of Democracy 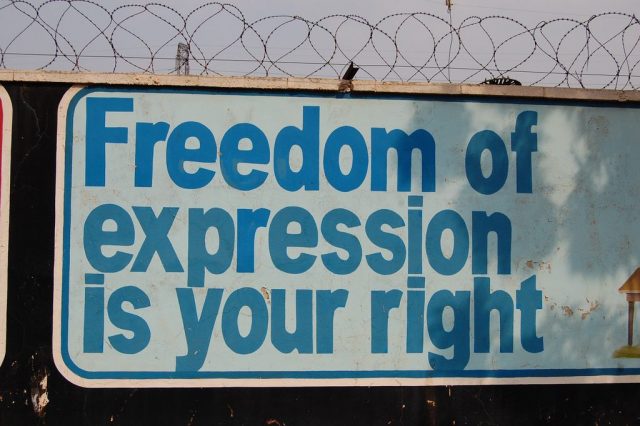 This article is written by Siddhi P. Nagwekar, Karnataka State Law University’s Law School. This article discusses the Freedom of Speech & Expression in the Indian context and the limitations on the same.

Benjamin Franklin once said: ‘Whoever would overthrow the liberty of a nation must begin by subduing the freeness of speech.”

Expression is a matter of liberty and right. The free rein of thought and right to know are the origin points of expression. Free Speech keeps democracy alive, going. Freedom of expression is vital to the growth and actualization of individual personality. Freedom of expression is all-important in a democratic arrangement of State where people are the sovereign rulers. Iver Jennings said, “Without freedom of speech, the appeal to the reason which is the basis of democracy cannot be made”. Milton in his Aeropagitica says that without this freedom there can be no health in the moral and intellectual life of either the individual or the nation. The social interest in free expression rests on the idea that without expression, there is no society at all because communication is the very spirit of social life.

In the Indian Context

In order to initiate this objective, “freedom of speech and expression” has been promised as a fundamental right under Article 19(1)(a) available to all citizens, subject only to limitations which may be imposed by the State under clause (2) of that Article.

The rights mentioned in Article 19 (1) are not exhaustive of all rights of a free man. Some of the rights falling outside Article 19 are freedom to move, right of citizenship, the right to vote, or contest election, the contractual right against the Government, right of Government servants to continue in employment and the right to strike. The freedoms enumerated in Article 19 (1) are those great and basic rights which are recognized as natural rights inherent in the status of a citizen. But none of the freedoms is absolute or uncontrolled.

Limitations on Freedom of Speech and Expression

In a modern State, total and unlimited individual rights don’t subsist, because they can’t exist. Freedom is more resolute if it is integrated with responsibility. Like any other freedom, the freedom of speech and expression has to be on the equal footing other social values. The choice of the individual to do as he enjoys even in unimpeachable matters is not absolute. It must time and again surrender to the common good.

Freedom of the press has to be propitiated with the collective interest of the society, which is known as “public interest”.

The propitiation of the contest between power and free will, between the assertions of diplomatic society and the interests of the individual is a perennial problem of political association which peculiarly continues notwithstanding any variance in the type of Government. So, there are fixed authorized prior restraints and limitations on the freedom of the press, in the collective interest of society.

Article 19(1)(a) of the Indian Constitution guarantees to all its citizens including media “the right to freedom of speech and expression”. Clause (2) of Article 19, at the same time, provides: “nothing in sub-clause (a) of clause (1) shall affect the operation of any existing law, or prevent the State from making any law, in so far as such law imposes reasonable limitations on the exercise of the right conferred by the said sub-clause in the interest of:

Additionally, in reasonable limitations, the test of reasonableness depends upon the nature of the right alleged to have been infringed, the elemental objective of the limitation imposed, the magnitude and gravity of the wrong sought to be remedied thereby, the imparity of the imposition and the subsisting conditions at the time of imposition of aforesaid limitation.

There are two criteria provided by the Constitution to validate the limitation on the freedoms guaranteed by Article 19(1). Any law restricting these freedoms must meet these two criteria. These are that the limitations must be for a specific aim referred to in the clause allowing the imposition of the limitation on that specific right and the limitation must be a reasonable one. The Constitution doesn’t define the expression “Reasonable Limitations”. The test of reasonableness has to be tried on each individual case and no popular pattern of reasonableness can be laid down or established which applies in all the cases.

‘Sovereignty and integrity of India’ as one of the base under Article19(2) for restricting the freedom under Article 19(1) (a) was added by amendment. The purpose of the amendment was to endow Parliament with specific power to legislate on this subject without having to face a constitutional dispute for the reason that the legislation was at odds with Article 19(1) (a). The amendment empowered the enactment of laws like the Criminal Law Amendment Act, 1961 and the Unlawful Activities (Prevention) Act, 1967 which made the act or words of any individual or association intending or supporting ‘the cession of any part of the territory of India or the secession’ of the same actionable.

3. Security of the State and public order

‘Public order’, ‘law and order’ and ‘Security of the State’ are not interchangeable expression. These ideas are in the category of three concentric circles, ‘law and order’ constituting the largest circle, inside of which lies the next circle amounting ‘public order’ and inside it rests the smallest circle of ‘security of State’. Thus, an act which disturbs ‘law and order’ may not necessarily disturb ‘public order’ and an activity which may be detrimental to ‘public order’ may not as a matter, of course, disturb  ‘security of the State’. The introduction of ‘public order’ as ground under Article19(2) by the Constitution (First Amendment) Act, 1951 was an effort to get around the repercussions of the decisions of the Supreme Court in Romesh Thappar v. State of Madras. The case was a challenge to Section 9(1-A) of the Madras Maintenance of Public Order Act, 1949 wherein the Government of Madras had issued an order forbidding the entry and dissemination of the journal Cross Roads in the State. In viewing whether the disputed Act was created with regards to the security of the State, Patanjali Shastri J. produced a difference between a breach of public order which influences the security of the State and that which involves a breach of a completely local implication.

The Court held that unless a law regulating freedom of speech and expression is hinted entirely against the weakening of the security of the State or its collapse, such a law can’t fall in the limitation under clause (2) of Article 19, even though the limitations which it looks to impose may have been developed broadly in the interests of public order. This ruling was followed by the Supreme Court in the case of Brij Bhushan v. State of Delhi.

Limitations under this category would comprise of not only libel of foreign dignitaries but also promotion favouring enemies to the system in a foreign state after India has recognised a particular authority in that state, or advocacy supporting war with a state at peace with India. Presently, there’s no distinct regulation on this subject. However, a range of statutes entail limitations on forms of expression which might have an unfavourable effect on friendly relations with foreign states. Statutes controlling media are spelt out in these statutes of the Cinematograph Act, 1952, the Cable Television Networks (Regulation) Act, 1995, and the Right to Information Act, 2005.

5. Incitement of an offence

The Word ‘offence’ is not defined in the Constitution. As per the General Clauses Act, 1897 it means ‘any act or omission punishable by any law for the time being in force.’ So as to pass for as a reasonable limitation under Article 19(2), the law imposing a limitation relating to ‘incitement to an offence’ must relate to prevalent offence i.e. the incitement must be of an act which is, at the time, a punishable offence under existing law. Further, the legislation must be in respect of a definite offence. Sheer consent of or regard for an act of murder or violence doesn’t reflexively come within the extent of this limitation unless the publication itself has an existing proclivity to provocate or encourage the commission of the offence. The court must examine the state of affairs in each case in judging such an inclination, the purpose of the work, the time at which it was published, the class of the people who may read it, the impact it would have on their minds, the milieu in which the words were spoken and the interim between the occurrences narrated and the publication of the work.

The motive underlying this is through this limitation the image of humanity and dignity of women can be sought to be safeguarded in the way media projects it. The society is bound to decompose if elevated degrees of propriety and morality are not sustained. So, limitation on freedom of speech and expression was brought in which may otherwise be favourably misused for intentionally lowering the public morals. According to the Oxford Dictionary, obscene means “offensive to modesty or decency expressing or suggesting unchaste and lustful ideas; impure, indecent.” In Ranjit D. Udeshi v. State of Maharastra, ‘Obscenity’ has been defined by the Supreme Court as ‘the quality being obscene which means offensive to modesty or decency; lewd; fifty and repulsive’. Section 292(1) of Indian Penal Code, 1860 defines ‘obscenity’. Images of women in electronic media, by way of commercial advertisements or themes of serials or in reality shows or repeated show of films, can outright sway the young mind. The internet as an information setup is a vocal apparatus, is viewed as a tool for democratizing speech on a global basis.

The right of the preservation of one’s reputation is acknowledged as a right in rem, a right good against all the world. A statement is said to be ‘defamatory’ when it injures the reputation of the person to whom it refers and ‘exposes him to hatred, ridicule and contempt’ or which causes him to be avoided or which has an inclination to injure him in his office, profession or calling. Defamation usually takes one of two forms: libel or slander. Libel comprises of the publication of a defamatory statement revealed in a permanent form for instance in a written form, in prints, pictures, statute, waxwork, effigy etc. where on the other hand defamation is oral, or by gestures or in some other transient form, it constitutes the tort of slander. Following are the elements for an act to constitute defamation:

It can be concluded that right to freedom of speech and expression is one of the most relevant and important fundamental rights, especially when living in a democratic setup. It includes not only circulating one’s views by words or in writing or through audio-visual instrumentalities but also the advertisements and through any other communication channel. It also entails right to information, freedom of press etc. Therefore, this fundamental right has a wide horizon. From the above case laws, it is apparent that the Court has always placed a broad interpretation on the merit and contents of Article 19(1)(a), making it subjective only to the limitations permissible under Article 19(2). Efforts by intolerant authorities to curb or choke this freedom have always been strongly pushed back, more so when public authorities have deceived autocratic tendencies.