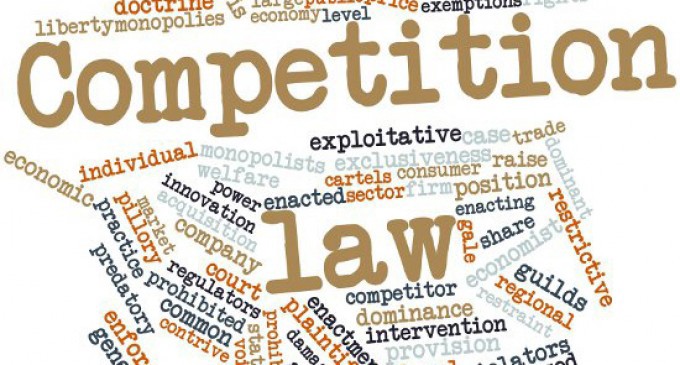 This article has been written by Navneet Chandra. Picture credits to WordPress.com

Competition means economic rivalry between entities or companies, to draw the highest number of consumers and earn the most profit. Competition law is also called in some countries as Antitrust law. Free and fair competition is essential for creating and maintaining an environment conducive to business and a prosperous country. The objective of all competition laws, around the world is to ensure an environment where all companies compete fairly. The first act introduced in India for regulation of competition was Monopolies and Restrictive Trade Practices Act, 1969. When the Act was found to be inadequate, a new act called the Competition Act, 2002 was introduced.

The object of this Act is to create an environment that promotes competition and safeguard the independence to do business. The Act states in its Objects and Reasons that because of globalization, India has opened up its economy to the world, removed restrictions and controls and liberalized the economy. The preamble provides for the establishment of a Commission to prevent practices having adverse effect on competition and also promotion of and sustenance of competition in markets. The aim is to protect the interest of the public. The domination of a firm is decided on the basis of firm’s structure. The act is punitive in character. It seeks to promote competition.

Evolution and Development of Competition Law in India

India adopted its first competition law way back in 1969 in the form of Monopolies and Restrictive Trade Practices Act (MRTP). The Monopolies and Restrictive Trade Practices Bill was introduced in the Parliament in the year 1967 and the same was referred to the Joint Select Committee. The MRTP Act, 1969 came into force, with effect from, 1 June, 1970. However, with the changing nature of business, market, economy on the whole within and outside India, there was felt a necessity to replace the obsolete law by the new competition law and hence the MRTP Act was replaced with the Competition Act of 2002.

The enactment of MRTP Act, 1969 was based on the socio – economic philosophy enshrined in the Directive Principles of State Policy contained in the Constitution of India. The MRTP Act, 1969 underwent amendments in 1974, 1980, 1982, 1984, 1986, 1988 and 1991. The amendments introduced in the year 1982 and 1984 were based on the recommendations of the Sachar Committee, which was constituted by the Govt. of India under the Chairmanship of Justice Rajinder Sachar in the year 1977.

The Sachar Committee pointed out that advertisements and sales promotions having become well established modes of modern business techniques, representations through such advertisements to the consumer should not become deceptive. The Committee also noted that fictitious bargain was another common form of deception and many devices were used to lure buyers into believing that they were getting something for nothing or at a nominal value for their money. The Committee recommended that an obligation is to be cast on the seller to speak the truth when he advertises and also to avoid half-truth, the purpose being preventing false or misleading advertisements.

However, as the times changed, the need was felt for a new competition law. With introduction of new economic policy and opening up of the Indian market to the world, there was a need to shift focus from curbing monopolies to promoting competition in the Indian market.

In October 1999, the Government of India constituted a High Level Committee under the Chairmanship of Mr. SVS Raghavan [‘Raghavan Committee’]to advise a modern competition law for the country in line with international developments and to suggest legislative framework, which may entail a new law or suitable amendments in the MRTP Act, 1969. The Raghavan Committee presented its report to the Government in May 2000.

The committee inter alia noted: In conditions of effective competition, rivals have equal opportunities to compete for business on the basis and quality of their outputs, and resource deployment follows market success in meeting consumers’ demand at the lowest possible cost.

On the basis of the recommendations of the Raghavan Committee, a draft competition law was prepared and presented in November 2000 to the Government and the Competition Bill was introduced in the Parliament, which referred the Bill to its Standing Committee. After considering the recommendations of the Standing Committee, the Parliament passed December 2002 the Competition Act, 2002. Hence, the Monopolies and Restrictive Trade Practices Act, 1969 [MRTP Act] was repealed and was replaced by the Competition Act, 2002, with effect from 1 September, 2009.

India and the world were going through a new phase of globalisation, liberalisation and privatisation and these changing times were bringing newer challenges and the existing MRTP Act had become obsolete in the modern era. Hence the new Competition Act came into being in order to suit the need of the hour. The new act is based on the regulation of conduct or behaviour of the players in the market and is result oriented rather than being procedure oriented like the MRTP Act.

Further its main purpose is to protect and promote competition in the market. Competition is very essential as it benefits: the Consumers as they get wider choice of goods and services, better quality and improved value for money; it benefits the Businesses as a level playing field is created and a redressal of anti-competitive practices is available, the inputs are competitive priced, they tend to have greater productivity and ability to compete in global markets and finally it also benefits the state as there is optimal realisation from sale of assets and there is enhanced availability of resources for social sector.

Socio Economic Offences
COVID-19 and Liability of Parties in Contracts
Section 8 of the Companies Act, 2013