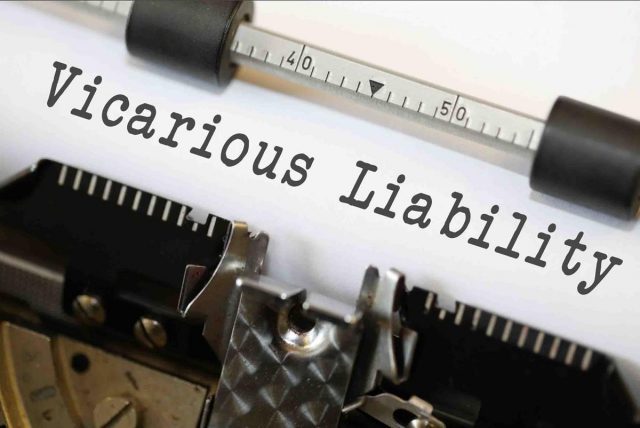 When a person does a wrongful act then he is liable for that act and not any other person.

However, in certain cases, a person may be held liable for the actions of others. In such cases, the law imposes vicarious liability on one person for the acts of others.

A can be liable for the act done by B, if there is a certain kind of relationship between A and B, and the wrongful act done is somehow connected with that relationship.

Vicarious liability is a form of a liability that arises under the common law doctrine of agency, respondeat superior, and the responsibility of the superior for the acts of their subordinates.

Vicarious liability is based on two principles. Following are those principles:

Example: If an employee of a company commits fraud then the company will be liable for it.

There should be a relation between the wrongdoer and the other party, such as Principle and Agent, Master and Servant, Employer and Employee, etc.

This maxim is used to hold Master vicariously liable which means “Let the superior/principal be liable/responsible”.

Many times a servant does the dirty work of its Master in his course of employment and to avoid the responsibility the Master then fires the servant. So, to stop the exploitation of the servant’s a Master is made liable for the wrongful act done by the servant if the act is done during the course of his employment.

This maxim is also used to hold the Master liable.  It means “One who makes others do an act; it will be seen as if he has done it himself”.

A Master is considered as an insurance that the aggrieved will be will able to get compensation/damages.

It is not necessary the principal will be liable for only the wrongful act he had authorized an agent to do. The Principal will also be held liable if an agent does a wrongful act in the ordinary course of the performance of his duties as an agent.

Shasha had Villa on her name which she wanted to sell; she approached Rera Estate Agency for that. There a manager named Manglesh made Shasha sign a document which she believed were the sale deed which, in reality, the manager Manglesh had made her sign the gift deed in his name. After getting the Villa he sold it and then misappropriated the money received from selling it.

Here, Manglesh had acted solely for his benefit and without the knowledge of his principal (Rera Estate Agency). Manglesh being an agent and acting in the course of his apparent or ostensible authority, due to which the principal will also be liable for the fraud.

If a partner commits any wrong in the course of business of the partnership firm then other partners are also liable for the same.

The partners are liable jointly and severally.

If one partner commits fraud then other partners of the firm are also liable for the fraud.

If a servant does a wrongful act in the course of his employment, the master and servant both are liable for it.

This liability also derives its validity from the maxim qui facit per alium facit per se, which means “he who does an act through another is deemed in law to do it himself”. As both master and servant are liable, the plaintiff has a choice to bring an action against either or both of them. Their liability is joint and several. They are joint tortfeasors. Here the maxim respondeat superior (let the principal be liable) is used so that the clam can be met because of the master’s large pocket and also to pass on the burden of liability through insurance. The liability arises even though the servant acted against the express instructions, and for no benefit of his master.

For making the Master liable following two conditions must be satisfied:

(1) The wrong was committed by the ‘servant’.

(2) The servant committed the wrongful act in the ‘course of his employment’.

Who is a master?

Master is that person who employs another person subject to certain terms and conditions to work under his orders and supervision.

Who is a servant?

A servant is a person who is employed to do work under the directions and control of his employer/Master.

An employer is not liable for any wrongful act done by servant, if he does it after the duration of his employment.

An employer is not liable for any wrongful act done by an independent contractor.

A person can be liable for the act done by the other person if he is also a party to the offence.  Example:

The principle which is followed the is that a person may be held liable as the principal offender, even if the actus Reus was committed by some other person. The person who commits the act on the instruction of the other will also be held liable. He will not be considered innocent.

2020-10-11
Previous Post: Auto tuning the vocal: ‘Karaoke mode’ a Patent Granted to Spotify
Next Post: Refusal Of Interim Relief Claim Made Against Arbitrary Placement Of Doctors.