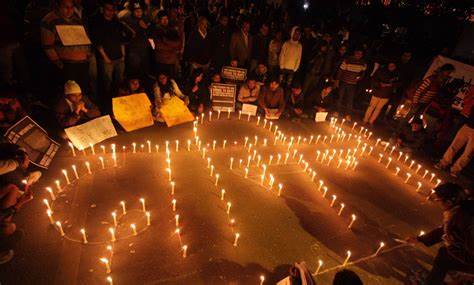 This article has been written by Yash Mittal, pursuing LLB 1 year from Mewar Law Institute. This article consists of the brief history of the most distressing case of gang rape which happened in Delhi followed by the timeline, mass protest, amendments in laws and affects.

On the dark night of 16 December 2012 in Munrika, a 23-year-old girl Jyoti a physiotherapy intern was brutally beaten, gang-raped in a bus. Her friend Awindra Pratap Pandey was also traveling with her on the bus.

A private white bus with yellow and green strips and written Yadav on the bus came to the bus stop at munrika and a young boy who was acting as a bus conductor shouting for passengers going towards Dwarka and Palam mod.

The victim and her friend were going back to their homes after watching the movie ‘Life of Pi’.

On the bus there are 6 other people who were traveling including the driver, all of them raped the girl and assaulted her and her friend.

The victim friend was beaten by an iron rod and after the assault and gang rape, both of them were thrown out of the bus. The victim and her friend were thrown naked on the road and a person who was passing saw them and informed the Delhi Police.

She suffered serious injuries to her intestines, abdomen, and genitals and doctors said that it was due to the penetration. One of the juveniles inserted the L-shaped iron rod into the private part of the victim and the victim also fought back by biting three of the attackers.

Police reached the victim and immediately they were admitted to the Safdarjung Hospital and was immediately taken into ICU. One of the accused admitted that he had seen the rope-like object coming out of the women, later it was described by the doctor that it was her intestine and only 5% of the intestine left inside her body.

It was decided by the doctors that for the better treatment of Nirbhaya  they had to shift her to Singapore’s Mount Elizabeth Hospital. In six-hour flight by Air Ambulance, she suddenly got a cardiac arrest and on 29 December she wass very critical and she died.

The victim said to the doctors that she wants to live and wants the justice against the 6 attackers namely- Ram Singh, Mukesh singh, Akshay Thakur, Pawan gupta, Vinay sharma and juvenile.

A BBC documentary titled India’s Daughter based on the attack was broadcast in the UK on 4 March 2015.Since Indian law does not allow the press to publish a rape victim’s name, the victim was widely known as Nirbhaya, meaning “fearless”.

4) August 2013- JJB convicts the juvenile for gang rape and murder and awards a three-year term at a probation home.

7) January 7, 2020- A Delhi court issued a death warrant against all four convicts for their hanging on January 22.

Akshay Singh is the one who was left to file the petition, which was later the President refused. One of the convicts of Nirbhaya  case Akshay Singh’s wife had filed for divorce and faints outside the patiala court and said that she and her minor son should be hanged too.

Criminal Law (Amendment) Act, 2013 was passed by Lok sabha on 19 March 2013,and by the Rajya sabha on 21 March 2013,which provides for amendment of Indian penal code (IPC), Indian evidence act and code of criminal procedure, 1973 on laws related to sexual offences. It came into force on 3 April, 2013.

The definition of Rape had also been charged under the Indian penal code Section 375. The definition is broadly worded with acts like penetration of the penis into the vagina, urethra, anus or mouth; or any object or any part of the body to any extent, into the vagina, urethra, or anus of another woman or making another person do so; to apply mouth or touching private parts constitutes the offense of sexual assault.

Nirbhaya  fund – It was announced by the finance minister in his 2013 budget speech with a government contribution of ₹1000 crores for empowerment, security, and safety of women and a girl child. This fund is expected to support initiatives by the government and NGOs working towards protecting the dignity of women in India.

People around the world were disheartened by the news of Nirbhaya , they want justice for her. Public protests took place in New Delhi and several other parts of the country. Protest in India Gate, Parliament of India, and the residence of the president of India. Thousand of people gathered and supported Nirbhaya  and demands justice.

Protest were not seen on the streets only but also occured in the social media platforms like Facebook, Instagram, Twitter. Celebrities and manu famous personalities also supported Nirbhaya  by using hastags like #justiceforNirbhaya  and with whatsApp users replacing their profile images with black dot symbol.

Police stated that peaceful protests had been hijacked by political activists and hooligans.

According to the 2018 annual reports of the National Crime Records Bureau (NCRB) 33,356 cases were reported across the country on an average of 91 rapes daily. In metropolitan cities, the national capital of Delhi continued to have the highest number of rape cases.

One rape was reported every 15 minutes in India. And the actual results were more horrifying because most of the cases were not reported. Cases remain unreported because women suffer humiliation from society and from their family itself.

Rape convicts commit the offense because there is no fear in the eyes of the accused. Some countries had better punishment for rape.

4) Afghanistan – Shot in the head or hanged to death.

Article-32 and Article-226: Purpose and Distinction
Limitations on the Freedom of Contract
Polluter Pay Principle

2020-09-23
Previous Post: Issue of shares under Companies Act, 2013
Next Post: The Apex Court Quashes The Plea Against The Maharashtra High Power Committee’s Categorization Of Prisoners For Temporary Release Due To Covid-19.