Definition of State under Article 12 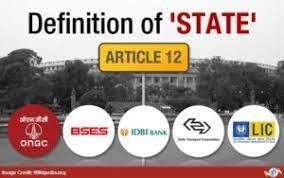 Article 12 defined the term state (only) that applies to article 12-35 of the Indian Constitution. It includes: –

The Supreme Court in one of his landmark judgments held that all agencies even Private Bodies fall under the Meaning of state.

Now the question raised that body created by law but created for any commercial purpose whether that will fall under the definition of a state.

Whether Judiciary Falls under the Definition of State

Whether Article 12 is Inclusive or Exhaustive