Conciliation and its Mechanism 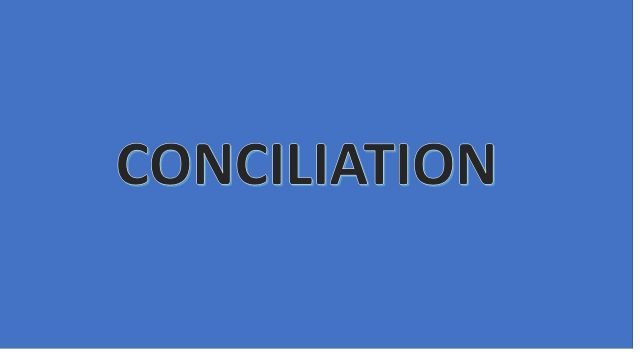 Vanshika Arora is a first-year student at Army Institute of Law, Mohali. This article provides the meaning and mechanism of the process of conciliation.

Conciliation is an alternate dispute resolution (ADR) technique. ADR is an attempt to devise mechanisms that are an alternative to the conventional justice systems. These alternatives are endorsed since the courts cannot take all the burden of administering justice. Some disputes can be amicably settled outside of court, hence sparing money, time, and effort of the aggrieved party as well as the judicial system. The pendency of cases in the courts is another reason that ADR techniques are preferred. A meeting of Chief Ministers and Chief Justices, held in 1993, formed a resolution to undertake and promote methods of ADR such as arbitration, conciliation, mediation, and negotiation. The meeting emphasized that these “out of court” techniques are flexible in terms of procedure, and save a lot of time and expenditure as compared to the traditional court dispute resolution.

Part III of the Arbitration and Conciliation Act, 1996 deals with the procedure and mechanism of conciliation. According to Wharton’s Law Lexicon, conciliation is the “settling of disputes without litigation”. It is done outside of court, with the help of a third party called the “conciliator”. The parties involved, arrive at a decision themselves, with the assistance of the conciliator, and no administrative or judicial intervention is observed, as is the case with arbitration, wherein the final judgment is decided by the Arbitration Tribunal.

According to Halsbury’s Law of England, “Conciliation is the process of persuading parties to reach an agreement, and is plainly not arbitration, nor is the chairman of a conciliation board an arbitrator.”

Role and Appointment of a Conciliator

Section 63 and 64 lay down the qualification, number, and process of appointment of conciliators. According to Section 63, the number of conciliators may vary from one to three. In the case of more than one conciliator, they must function jointly.

Section 64  provides that for assistance in the appointment of a conciliator, parties can approach a suitable institution for hiring a conciliator.

Section 66 further provides that the conciliator is not bound by the Code of Civil Procedure(1908) and the Indian Evidence Act(1872).

Role of Conciliator(Section 67): This section provides that the conciliator has to carry the process amicably, in an independent and impartial manner. He can conduct the conciliation proceedings in any manner he deems fit and does not have to adhere to any manner stipulated by any enactment. He may also at any point in time refer the dispute to settlement proceedings, without furnishing any statement enumerating reasons for the same.

Lastly, the conciliator has to be guided by the principles of objectivity, fairness, and justice.

For better conduct of the proceedings, parties may also seek the administrative assistance of a suitable institution or party, as given under Section 68.

Restrictions on Role of Conciliator

As per Section 80 of the Act, the conciliator shall not act as an arbitrator in any proceeding subject to conciliation. Moreover, he shall not be presented by the parties as a witness in any arbitral or judicial proceedings.

The procedure of conciliation is carried out in the following manner:

This section provides that the party wishing to conciliate shall send a written notice enumerating the objective of conciliation, to the other party. The other party can accept or reject the notice. If rejected, no conciliation proceedings can be carried out. If the sending party does not receive a reply within thirty days, or within such a period as defined under the notice, this should be treated as a rejection.

As stated earlier, Section 67 provides that the conciliator may at any point in time refer the case to settlement. Moreover, the parties can also, under Section 72, suggest the settlement of the dispute.

According to the section, when it appears to the conciliator that elements of settlement exist, he may formulate terms of such settlement and submit them to the parties, which can suggest observations for re-formulation. When the parties reach a settlement, they need to draw up and sign a written settlement, which shall be binding upon both parties.

In the case of Harsh Dayaram Thakur v State of Maharashtra, the Apex Court held that a settlement formulated by the conciliator on his own, in secrecy is sent to the Court in a sealed manner, shall not be valid since the act requires it to be signed by both parties.

According to this Section, a settlement agreement shall have the same status and effect as if it were an arbitral award under Section 30 of the Arbitration and Conciliation Act, 1996. Moreover, in the case of Mysore Cements Ltd vs Svedala Barmac Ltd, the Supreme Court held that not every agreement, arrived through any manner in a conciliation proceeding will have the effect of an arbitral award under section 30. Only those agreements that have been concluded “in conformity with the manner stipulated and form envisaged and duly authenticated in accordance with Section 73” can be called an agreement of settlement in the effect of an Arbitral Award.

Section 76 provides four ways in which conciliation proceedings can be terminated:

Under section 77, parties also have the option to resort to judicial or arbitral proceedings. As a general rule, during the time of conciliation, such restoration is not permitted unless either party considers it important for the protection of its rights.

Climate Change Law: From the Kyoto Protocol to Present Days and Beyond
Bhopal Gas Tragedy: Development in Tort and Environment Law
Section 377: Journey from Prejudice to Pride