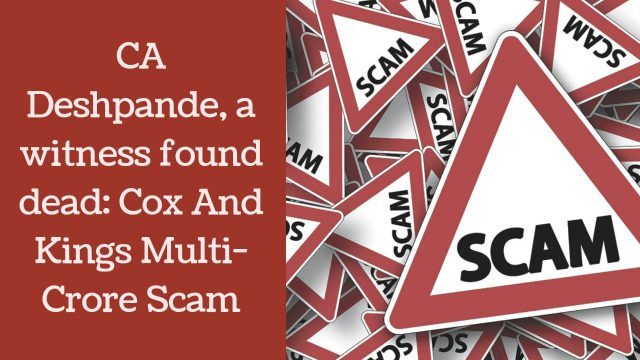 The death of a CA has been investigated by the Mumbai police who was employed with the travel firm Cox and Kings.

CA Sagar Suhas Deshpande was found dead on October 12 tracks in Titwala city of Mumbai’s Thane district. He resided with his family and went missing from his home on October 11 and a few days before he had to give testimony to police officials over the case of Cox and Kings. The family identified his body on 17th October and Mumbai police began the investigation on the same day. Later on, it was found that Deshpande was a witness in a money laundering case on Cox and Kings which is being investigated by the Enforcement Directorate (ED). CA had promised to provide ED with crucial documents to the Economic Offences Wing (EOW) and was reportedly summoned by the crime brand on October 13.

The ED started putting an eye on the Cox and Kings during the probe into the fraud issued by Yes Bank. While ED was investigating the case, they found out the Cox and Kings used ‘fictitious customers’ to launder thousands of crores that the company borrowed from Yes Bank. The travel firm was involved in the falsification of accounts, overstating the sales figures and understating the debt figures and fictitious transactions. During the investigation of the Yes Bank case, the ED notices irregularities in relation to loan sanctioned to Cox and Kings Group.

The ED also found that from 2015 to 2019 sales of Rs 3,908 crore were made to 15 non-existent and fictitious customers. The majority of the collection shown in ledgers from Ezeego was not found in the bank statements of the Company. In another occurrence, the probe agency claimed that Cox & Kings sold Holiday Break Education Limited, UK (HBEL), a subsidiary of their firm, for Rs 4,387 crores and instead of discharging the liability of the bank, they siphoned off the most of the money. From this siphoning, USD 15.34 million was transferred to Kuber Investment Mauritius Pvt Ltd which was controlled by Peter Kerker.

Deshpande joined Cox and Kings in July 2010 and rose to become manager finance. The deceased worked for the firm up until a year ago as a general manager. The travel firm ended its operations and CA has been unemployed since then. Out of many employees, the deceased was also among the one being questioned by the ED and the EOW under the multi-crore scam borrowed from Yes Bank. He was not an accused in the case nevertheless was cooperating with the ED in their investigation into the multi-crore scam. Deshpande was asked to appear with documents before the police on October 13. However, he went missing before and was found dead later.