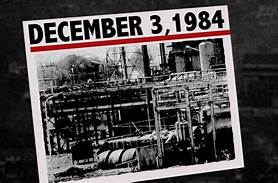 Bhopal is famous for its historical records, lakes, and green plants, but more importantly, the city is famous for the worst industrial accidents in the world. At midnight on December 3, 1984, the poison gas that leaked from the Union Carbide plant in Bhopal, the capital of Madhya Pradesh, directly caused thousands of deaths. This event is now called the Bhopal Disaster or the Bhopal Gas Tragedy. According to official records, the Bhopal gas accident caused 3,787 deaths. The Madhya Pradesh government updated these figures later, as officials immediately estimated 2,259 deaths due to gas leaks from the Union Carbide plant. However, activists fighting for justice for the victims of the Bhopal gas tragedy estimate the death toll at between 8,000 and 10,000. In an affidavit filed in 2006, the government stated that 5,58,125 people were injured by the Bhopal gas leak, of whom about 3,900 were seriously and permanently disabled.

The gas leak at Union Carbide (now known as The Dow Chemical Company) was reported after midnight on December 2-3. The incident occurred at Plant C of the Bhopal Union Carbide Plant. The breeze quickened the pace and carried poisonous gas leaked from the Union Carbide factory to other parts of the city, killing people awake and asleep. According to the government affidavit, some 3,000 people died from the poison gas within hours of the incident. It is estimated that approximately 40 tons of methyl isocyanate gas (MIC) and other chemicals leaked from the Union Carbide plant. Methyl isocyanate is highly toxic, if its concentration in the air reaches 21 ppm (parts per million), it will cause death within a few minutes of inhaling the gas. In Bhopal, this level is several times higher.

Methyl Isocyanate is highly toxic. The American Conference of Government Industrial Hygienists stated that the level up to which a worker could be exposed to MIC without any harmful effects is 0.02ppm. As soon as the level is 0.4ppm it is toxic by inhalation, or by ingestion. At 5ppm, most people cannot detect it but because of symptoms, they get a warning.

The symptoms of exposure include:

Irritation in the eyes

Irritation in the nose and throat

Therefore, storing methyl isocyanate requires proper care and caution, and especially when it comes to water extra precautions must be taken. Methyl Isocyanate is very sensitive to water. It can be stored in glass or stainless steel, and the temperature should be below 40-degree Celsius or 104-degree Fahrenheit.

After the accident, many people filed cases for the victims, and there were problems with their claims. Many people, especially low-income earners, we’re unable to fight for a long time. These cases were filed against UCC in Bhopal and the United States. He also tried to resolve the matter out of court but was unsuccessful. After some time, the Indian Parliament passed the Bhopal Natural Gas Spill Disaster (Claim Processing) Act in 1985. According to section 3 of the Act, the Indian government has the right to bring cases on behalf of all citizens with rights and Claim compensation for them. The government introduced the “1985 Bhopal Gas Spill (Claims Recording and Processing) Plan” by Section 9 of the Act. The Indian government filed a lawsuit against UCC in the United States District Court of New York. However, UCC argues that it is inconvenient to file a suit in a US court. They argued based on an inconvenient venue (meaning that when the parties have a more convenient venue, the court may deny jurisdiction). UCC said that since the accident happened in Bhopal, all the evidence is there, so it is more convenient to try in the Indian courts. Keenon J. subsequently accepted UCC’s plea and filed a new case with the Bhopal District Court. The district court ordered UCC to pay the victims 350 million rupees. UCC subsequently appealed to the Madhya Pradesh High Court against the decision of the Bhopal District Court. This resulted in the reduction of “temporary compensation” from 3.5 billion rupees to 2.5 billion rupees. At the same time, UCC tried to resolve the matter directly with the gas victims outside the court. However, Deo J. of the M.W. Bhopal District Court ordered UCC not to make any arrangements with any victims until the court issued a new order. Finally, after the spread of the absolute liability rule, the court held that UCC was responsible for the Bhopal tragedy. Although it is suspected that the Indian judiciary cannot handle this situation. They believed that under strict liability rules, violators would shirk liability, but this did not happen. The Indian judiciary provides justice to the victims. From February 14-15, 1989, the Supreme Court ordered UCC to pay victims $ 470 million (Rs. 75 billion).

No matter how many years have passed, the aftermath of the Bhopal tragedy is still visible today. Even after the UCC is held accountable, the loss of those who have lost their lives and those who still suffer cannot be measured. While governments need to promote globalization, they must ensure that there are no risks involved. In addition, the best way to implement the enacted laws is also a necessity now, because nothing is more important than the lives of people.

The article has been written by Aanya Gupta pursuing BBA LL.B. from Vips, GGSIPU, New Delhi.