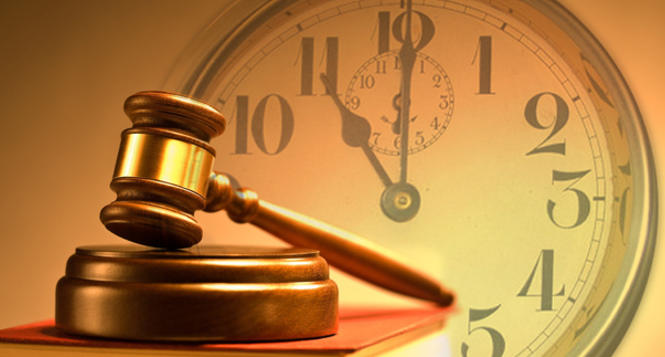 Right to Speedy Trial: Need of the Hour

The inception of speedy trial, as per several writers dates back to the twelfth century and can be traced in Assize of Clarendon [act of Henry II of England in 1166], famous tomes of Sir Edward Coke and it can also be traced in Magna Carta of 1215 which states, ”we will sell to no man, we will not deny or defer to any man either justice or right”.

The first constitution in which the right to a speedy trial can be found is the constitution of the United States of America. This right is enshrined under the 6th amendment of the American constitution.

The right to a speedy trial is a human right granted to a defendant to be tried for alleged crimes within a reasonable time after being taken into custody.

The right to a speedy trial is a right framer designed to protect a person from prolonged de facto punishment which is an extended accusation that limits the liberty and besmirches the good name of an accused. In common, the word speedy means something done without delay or promptly. And trial means a judicial examination and determination of issues between parties by a judge.  In general, the term speedy trial is a trial conducted without undue delay or within a reasonable period of time in accordance with established rules and procedures.

A number of states adopted speedy trial legislation before the late sixties and periodically bills related to speedy trials were introduced starting from American congress early initiatives on invoking the defendant’s sixth amendment right to a speedy trial, article 21 of Indian constitution, article 6 of the European convention on human rights and so on.  The roots of speedy trial can be traced in a bill introduced by representative Abner J. Mikva in November 1969 entitled “Pretrial crime reduction act”.

Speedy trial is the essence of criminal justice.  It is a prominent right of a person and also it is of paramount importance. The speedy trial makes sense only when it includes the ingredients of fairness in all stages of trial which include (i) Investigation (ii) inquiry(iii) trial(iv) Appeal (v) Revision (vi) Re-trial. In A.R.  Antualy  v. V. S. R. Nayak5, the supreme court of India held that it is neither desirable nor advisable to fix any time limit for the trial of offenses. In case of delay in the trial, the prosecution is to justify the delay. Sometimes delay in the speedy trial would depend on the nature, facts, circumstances of the case which has been discussed in many prominent cases. The right to a speedy trial cannot be denied to the accused on the grounds that he failed to demand a speedy trial. In case, if a person’s right to a speedy trial is infringed, the accused person can seek relief from the competent court having jurisdiction.

GROUNDS FOR DELAY IN TRIAL:

This is a United States Supreme Court case that specifically involves about right of the defendant in criminal cases to a speedy trial. In the case, the court held that it is not possible to determine with precision when a right like a speedy trial is denied. It is impossible to say how long is too long in a system where justice is supposed to be deliberate. The court rejected the approach to “quantified speedy trial into a specified number of days or months” and “demand-waiver doctrine”. Rejecting these two rigid approaches in knowing the violation of speedy trial, the court adopted more flexible factors. Those factors include (i) Length of delay (ii) Reason for the delay (iii) Defendants assertion of his rights (iv) Prejudice to the defendant.

In this case, the Supreme Court of India held that there is absolutely no reason for undertrials to be allowed to continue in jail for a moment longer. And such continuance of detention would violate not only human dignity but also their fundamental right under article 21 of the Indian constitution.  The lordship also observed that the procedure prescribed by law for depriving a person’s liberty cannot be reasonably fair or just unless that procedure ensures a speedy trial for determination of guilt of such person.

COVID-19 has postponed many trials due to which undertrials languished behind the bars with no clear indication of when their cases will be heard.  Though the courts need to keep people safe during pandemics, they need to make sure that every avenue is explored to protect people’s constitutional rights. Languishing in jail is not justice, especially when a person is found innocent once a trial is held. The court can treat people fairly by first clearing serious cases, home detention over non-violent people, use of technology to initiate early court proceeding through E-Courts, digitalization of case records, and investigation reports.

Right to Speedy Trial in Context of India:

During medieval period, the Mughal king Aurangzeb was the first ruler who evolved the concept of speedy trial. The “Fatawa Alamgiri” is the drafted evidence which says that no person shall be arrested without permission of Kasi and justice shall be done quickly after the arrest of the accused and no person could be anguished in jail for an indefinite period unless the guilt is proved.

The right to speedy trial is a fundamental right inherent under article 21 of Indian constitution which guarantees the right to life and personal liberty. Though the speedy trial is not mentioned specifically, it is enumerated as a fundamental right as the content of article 21 as interpreted by the court in Maneka Gandhi v. union of India. In this case, the court held that no person can be deprived of his life or liberty except in accordance with the procedure prescribed or established by law and such procedure needs to be reasonable, fair, and just. It means that no person can be tried for an indefinite time after being arrested. When a person is arrested beyond a reasonable time, it violates the right to personal liberty.

According to section 57 of the criminal procedure code, a person arrested cannot be e detained for more than 24 hours. Only when a person is arrested without a warrant and in absence of a special order of a magistrate under section 167, exceed 24 hours exclusively of time necessary for the journey from the place of arrest to the magistrate’s court.

Section   167 of the criminal procedure code tells about the procedure to be followed when an investigation cannot be completed within 24 hours. This section provides the magistrate to authorize the detention of an accused in a custody, which he thinks fit for a term not exceeding 15 days on the whole.

Under this section  the magistrate may authorize the detention of an accused person beyond the period of 15 days if he is  satisfied that adequate grounds exist for doing so but, no magistrate  shall authorize the detention of an accused person in the custody of a total period exceeding 90 days where the investigation is relating to an offense punishable with death,  imprisonment for life or imprisonment for a term of not less than 10 years and 60 days where the investigation is  related to any other offenses and on expiry of such period the accused shall be released on bail if he is prepared to do so

This section provides that every investigation under chapter XII shall be completed without undue delay. This section provides that in every inquiry or trial, the proceeding shall be held as soon as possible, and once the examination of witnesses begins the same shall be continued from day to day till all the witnesses in attendance have been examined unless the court of law thinks it’s necessary to adjourn the same beyond that following day for the reasons to be recorded.

This section provides that investigation in case of child rape to be completed within three months from date on which the officer in charge of police station has recorded information regarding the case.

This section provides that in every inquiry or trial, the proceeding shall be held as soon as possible, and once the examination of witnesses begins the same shall continue from day to day till all the witnesses in attendance have been examined unless the court of law thinks it is necessary to adjourn the same beyond that following day for the reasons to be recorded.

These are few prominent provisions that ensure speedy trial.

The right to a speedy trial is available to an accused at all stages of trial namely investigation, inquiring, trial appeal, revision, and re-trial. According to the 221st report of the law Commission of India, speedy trial is the fundamental right of every citizen to get speedy justice and Speedy trial is the fundamental requirement of good judicial administration. The Indian constitution provides that whenever there is a violation of a fundamental right, a person can move to the Supreme Court under article 32 and the high court under article 226 of the constitution.

Fast track courts were established in India in the year 2000 with the aim to clear the long-pending sessions and other lower judicial cases. As of September 2020, there are 597 fast track courts of which 321 are exclusively POCSCO courts. According to National crime record bureau data,  nearly  26965 pending cases were completed by fast-track courts. Though the fast track courts have been functioning well in matters of many cases there still has been an evidence of large-scale protests demanding stricter punishments and speedy trial in cases of sexual assault against women. One such incident is gang rape of a 23-year-old woman which is also known as Nirbhaya case. In this case the Delhi fast track court sentenced the four accused to death on 13th September 2013. But, the convicts were hanged in Tihar jail in the month of March in the year 2020. Such huge delay in few cases especially in criminal cases has affected not only a single society but also the whole country.

The juvenile justice (care and protection of children) act, 2015 ensures speedy trial in section 36 which orders speedy social investigation and section 14(5) which tells about steps to be followed for a fair and speedy inquiry in case of juveniles. In Sheela Barse and Ors v. union of India and Ors (1986), the court held that the problem of detention of children accused of an offence would become easier if the investigation by the police and the trial by magistrate could be expedited.  This case focuses on the constitutional and statutory rights of a huge number of children being violated due to which they have been suffering custodial restrains.  It is important for a juvenile to have a speedy trial so that the juvenile can be addressed proper treatment and rehabilitation as the children are very prominent assets of a society.

Speedy trial is the need of the hour.  The purpose of speedy trial is to protect the innocent and to punish the guilty within a reasonable time with the component of justice.  There is a proverb – justice delayed is justice denied.   But there is another proverb which says   justice hurried is justice buried. Though it is true that delay defeats justice, it is also true that a quick trial cannot be ensured as reasonable, fair, and just. This is because a delayed trial is always not an unfair trail. Only when there is a proper balance between speed and justice, it would serve its actual purpose.

Finally, the state, concerned authorities and agencies as a guardian of people’s rights are duty bound to ensure speedy trial so as to avoid delay in a trial which would lead to miscarriage of justice.

This article is authored by Jakkula Hilda who is pursuing BA.LLB at University College of law (Osmania University).