HINDU MARRIAGE: IS IT SACRAMENT OR A CIVIL CONTRACT? 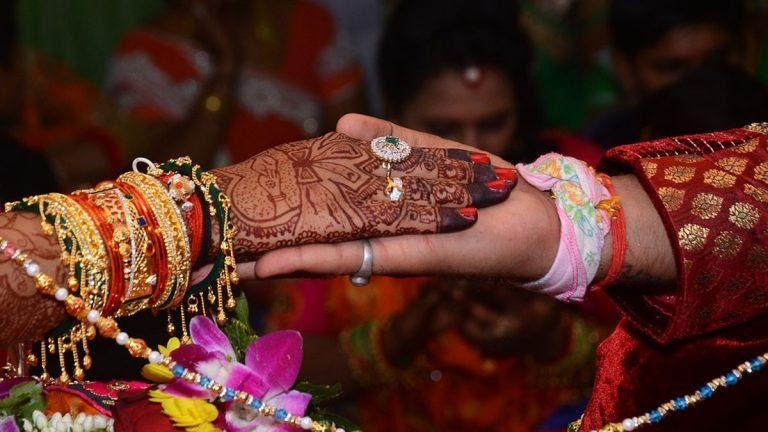 This Article is written by Karthik Varun pursuing B.A. LLB (Hons.) from Saveetha School of Law, Chennai. In this article, he has discussed the hotly debated question of whether Hindu marriage is a Sacrament or a Civil Contract by analyzing Sacred texts, Statutes, and Precedents.

Among Hindus, it is well known that Marriage is an essential deed without which the person is only half.

[i] A wife in Hindu Marriage is perceived not only as a companion in the pursuit of dharma, Artha, and kama but also of moksha. Manu also remarked that the husband is declared to be with his wife spiritually.

[ii] So, this is enough to argue that Hindus from time immemorial viewed marriage as a sacramental union that is permanent, indissoluble, and eternal.

KNOW WHY HINDU MARRIAGE IS ONLY A SACRAMENT?

A Hindu marriage is considered a religious sacrament mainly because only when religious rites are done it would mean a valid and complete marriage. Saptapadi, home, panigrahana are to be performed by a Brahmin with Agni Devata taking cognizance of the rites. If this is not done then the legal validity of the marriage may even be questioned.

A combined reading of Sec. 5, 11, and 12 of the Hindu Marriage Act makes the readers understand that consent is not an essential part of the Hindu marriage. Clause 2 of Sec. 5 of the Hindu Marriage Act deals with the mental capacity of the parties. It very clearly states that neither party must be incapable of giving valid consent. Also, clause 3 of Sec. 5 provides that the bridegroom should have completed the age of twenty-one years and the bride must have attained the age of eighteen years at the time of marriage. Interestingly the provision Sec. 10 and 11 of the Indian Contract Act, 1872, states that contract by a minor or an incompetent person is void.

All we expect is that when put according to Contract Law terms, a Marriage with a person of unsound mind or less age must be void. But that is not the case. According to Sec. 12 of the Hindu Marriage Act, a marriage of a minor or unsound person is voidable and not void. With this, we can argue that since the Hindu Marriage Act does not even follow the legal principle enshrined in the Contract Act, Hindu Marriage does not stand a chance to prove itself as a Contract.

Our Courts have been clear about the position of the fact that Hindu marriage is a sacrament only. Let us look at some of the very famous interpretations by the Court in this regard.

The Court in Tikait v. Basant [iiii], held that marriage under Hindu Law was a sacrament, an indissoluble union of flesh with flesh, bone with the bone to be continued even in the next world. In Shivonandh v. Bhagawanthuma [v], the Court observed that marriage was binding for life because a marriage performed by saptapadi before the consecrated fire was a religious tie which could never be separated. Also. the Calcutta High Court observed that a Hindu marriage is “more religion than secular in character”.[vi]

This finally leads us to the recent Judgement by Delhi High Court in 2017 which observed that Marriage under Hindu Law is a “sacrament” and not a contract that can be entered into by executing a deed.[vii] This was observed by Justice Pratibha Rani while dismissing a plea by a woman who had challenged an order refusing to declare as the legally-wedded wife.

ARGUING THAT HINDU MARRIAGE IS ALSO A CONTRACT

Many scholars both ancient and modern have taken the view that a Hindu Marriage is not only a sacrament, but also very clearly a contract.[viii] This same observation was made by our courts in various instances. We now will look into some of them.

The Court in Muthusami v. Masilamani[ix] observed that: “A marriage, whatever it may be a sacrament or institution, it un-doubtfully is a contract entered into for consideration, with co-relative rights and duties”. In Purushottamdas v. Purushottamdas[x], the court observed that “Marriage of Hindu people is a contract made by their parents”. Even when the doubt of whether it is fully sacramental arose, the Court did not hesitate to extensively refer to old scholarly books[xi] to interpret the position. In Bhagwati Saran Singh v. Parmeshwari Nardar Singh[xii], the court quoted Macnaghten’s Hindu Law, Starnages Hindu Law, and Vyawastha Chandrika and finally expressed the opinion that Hindu marriage was not only a sacrament but also a contract. Further, the Calcutta High Court observed in Anjana Dasi v. Ghose[xiii], that suits relating to marriage deal with that which in the eye of the Law must be treated as a civil Contract, and important civil rights arise out of that contract.

Also, there is a reference by Manu that there is a gift of the bride. This is what is called Kanyadan. Kanyadan fulfils the requirement of a gift under the Hindu Law. Hence, it is a Contract.

Thus it is very clear from the above arguments that the Hindu Marriage Act does not consider the question of consent as of much importance. Is it then possible to call it a Sacrament then? To answer this we can test the three qualifications of a Hindu Marriage as provided in the Introduction. First qualification being ‘permanent’, the second being ‘indissoluble’ and finally, the third requirement is ‘holy’.

The first requirement was destroyed by the recognition of HMA. The Widow Remarriage Act surely takes off the second requirement without question. Only the third requirement still stays intact to a certain level even today as religious and ritualistic practices are followed by Hindus.

So, to conclude we can say that Hindu marriage has neither become a contract nor has remained a sacramental union; it simply has a beautiful semblance of both.

[viii] A Treatise on Hindu Law and Usage, 1878 by John Dawson Mayne

2020-05-10
Previous Post: MEANING, NATURE AND SCOPE OF CONTRACT
Next Post: DISTRIBUTION OF POWERS BETWEEN CENTRE AND STATE