AN OVERVIEW OF ANTICIPATORY AND ACTUAL BREACH OF CONTRACT 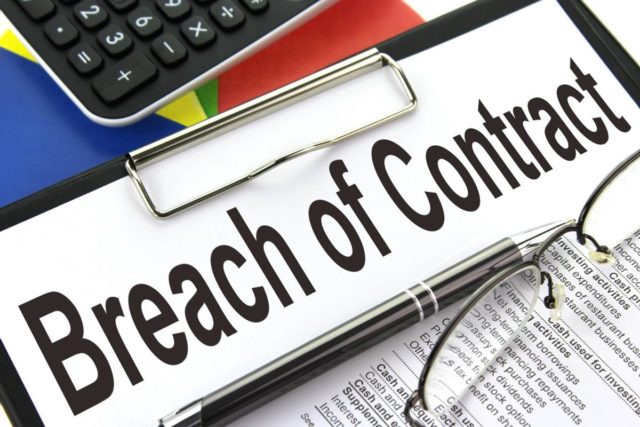 This article is written by Ritesh Das, a student at Symbiosis Law School, Hyderabad.

Under implicit repudiation, the party does not clearly refuse to carry out its obligation; rather the failure to perform the promises prior to the due date under the contract is insinuated from his words or actions.

Disposal of the breached contract

The event of anticipatory breach of contract generally calls for two alternatives to dispose of the breached contract by the aggrieved party:

Determination of anticipatory breach of contract

There are two main criteria that are deemed crucial to determine the case of anticipatory breach of contract:

When the party has rendered clearly regarding his non-performance or non-fulfilment of the part of the duty and the performance is the core of the contract, then the renunciation or failure to execute the contract cannot be subject to any circumstances or conditions. The reluctance would then be absolute.

In determining the magnitude of appropriate refusal of performance of the duties according to the contract, the perspective of a rational and prudent person would be considered while determining the position of the aggrieved party and also the decisions regarding the refusal to be clear and absolute…

In the case of Food Corporation vs J.PKesharwani[1], it was held by the Supreme Court that if one party made unilateral changes without intimation of the other side and then terminated the contract, this amounted to a breach (repudiation). It may also be clearly argued that any type of contract can be deemed to be breached if the party is reluctant or refuses to comply with their respective promises of the contract regardless of when the performance is scheduled to occur. Such unconditional denial or refusal is known as a repudiation to enter into a contract.

Actual or present breach of the contract alludes to the inability to meet the duties and obligations set out in the contract; implying the actual happening of the failure of performance of the defaulting party rather than mere anticipation. A party may breach a contract in innumerable ways from non-compliance with contractual deadlines to semi-performance or non-performance. Fortunately, choices are available to support the aggrieved party seeking reasonable redress or compensation for his injuries or damage.

In the case of a breach or infringement of the contract, the aggrieved party or both the parties may opt to accept and enforce the terms and conditions of the contract or seek redress for the financial damage arising from the infringement. The matter of conflict over the contract is taken to the court in case of failure of negotiations or informal attempts for solving the conflict. The lawsuit is not the sole choice for businesses and personnel engaged in commercial conflicts. Parties may agree to hire a mediator to review a contract dispute or to use binding arbitration.

Types of Actual Breach of Contract

Actual breach of contract due to the late performance: It occurs if either of the parties fails to meet the contractual duties and obligations within the specified time period for conformance; the other party is not obligated to fulfil its obligations and can hold the defaulting party liable for the breach of contract. However, the defaulting party may express his or her willingness to proceed in the performance of the contract. In such a scenario, the decision of allowing the defaulting party to execute the contract would depend on the factor whether the time or duration was the crux of the contract. If time is indeed a key element, failure to perform contractual obligations by the prescribed time limit shall be regarded as a breach of contract, whereas if time is just a trivial element, if time is not an essential condition, the aggrieved party may accept performance and claim damages for late performance.

In the case of Bishamber Nath Agarwal v. Kishan Chand, [3]It has been held that when an arrangement specifies that a particular act relating to the contracts is to be completed within a given period or manner, it should be performed in that manner or period and the parties don’t have the ‘ right to of performing it in their own way or time.

In the case of Haryanan Telecom Ltd. V. Union of India[4], it was held that one of the provisions of the contracts stipulated that exchanges made beyond the duration of delivery stipulated did not disenfranchise the party of the right to recover liquidated damages, the analysis of all the clauses unveiled that time was the essence of the contract.

REMEDIES OF BREACH OF CONTRACT

There are many penalties for the breach of contract, such as awarding damages, specific performance, recession, injunction and compensation. The award of damages is the primary relief in courts with limited jurisdiction.

If there is a breach or termination of the contract, the innocent party can claim the contract as rescinded and deny further performance. For such a situation, he shall be released from all his obligations and commitments under the contract. Example-R promises S to deliver 5 bags of candy on a particular day. B agrees to pay the price on receipt of the goods. If R failed to supply the goods, then S shall be released from the liability to pay the agreed sum.

The Court may issue a rescission–

If the contract is voidable by the plaintiff

If the contract is unlawful or unconstitutional on the grounds that it is not evident on its face and the defendant is more to blame than the plaintiff.

The term ‘damage’ refers to injuries and the term ‘damages’ means monetary compensation for the loss sustained by the aggrieved party for the infringement of the contract. The primary aim to award damages for breach of contract is to put the affected party in the same financial condition as if the contract had been executed properly.

The expression of ‘Quantum Meruit’ means ‘as much as earned.’ A right to sue a quantum meruit arises where a contract partially executed by one party has been terminated by a breach of the contract by the other party. The right is founded on an implied promise by the other party arising from the acceptance of a benefit by that party.

The injunction is an order of the Court of Justice which either directs the defendant to act in a positive manner or restricts the commission or continuation of a Prohibitory Act (To alleviate the injury or loss to the plaintiff).

A contract is the source of a specific compendium of rights and duties of the parties that would be of no benefit if there is no contractual provision for redress for damages or injuries suffered by the aggrieved party. Chapter VI of the Indian Contract Act, 1872 allows for the recourse to be rendered to the aggrieved party by means of restitution for damages or injuries suffered by the breach of the contract by the other party. It also allows for compensation for actual damages or injuries suffered by the party in infringement of the contract. Reasonable liquidated damages shall be compensated without evidence of loss. It also provides that in the event of a breach, the contracting parties must agree that the defaulting party shall pay the agreed amount to the other party or may agree that, in the event of a breach by one party, any sum paid to that party shall be relinquished. If it is not a valid pre-estimation of the loss, but a sum expected to ensure the execution of the contract can be considered ‘penalty.’ However, the simple stipulation does not grant the right to compensate through penalty, the evidence must be provided for injuries or damages incurred by a breach of contract.

IPU's move of Conducting Physical Exams Amid Pandemic a Challenge.
Freedom of Speech & Expression- The Pulse of Democracy
Exemption from Income Tax: Agriculture