Negligence in Tort Law | An Analysis 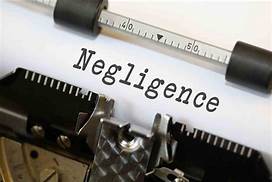 This Article is written by Yash Dodani, NALSAR University Hyderabad. He has provided a detailed analysis of the topic.

The basic notion of the tort law in India is based on the tort presidents developed in the English Common Law. The laws in English Courts are based on the notions of justice, equity and good conscience. Derived from the Latin term ‘negligentia’ which means ‘failing to picl up’. The term in its general sense means to be careless while performing any activity/work, but in a legal sense, the term means that a person has failed to take standard care while performing their work which a reasonable man should have kept in mind. The concept of Negligence in English law was developed in the 18th century as an independent cause of action in the courts. However, in India, there was no concept of Negligence until 1870 when the colonial government amended the Indian Penal Code and brought section 304A which deals with death by Negligence. Until then there was no concept of negligence in Indian Law.

According to Winfield and Jolowicz, Negligence is the breach of a legal duty of care by the plaintiff which results in undesired damage to the plaintiff. It was further given shape in Blyth v Birmingham Water Works Co.[i] negligence was defined as an omission to do something which a reasonable man would do in the condition or doing something which a reasonable man would not do had he been in the same situation.

The concept of Negligence can be classified into three broad categories given under;

Nonfeasance: it literally means that a person has failed to do something which he should have done in a particular situation and in the demand of time. For example, a contractor has not done repairs on a particular building and because of that reason, the people are injured due to falling down of some parts of the building.

Misfeasance: it includes doing a thing which should be done but not doing it in a proper way. Taking the same example as above, now the contractor has started to do the repairs in a building but using a poor quality of material to do the repairs and hence bringing a danger of collapse of the building.

Malfeasance: it refers to the very act which should not be done in the first place in the course of any work which he is doing. Again, taking the same example, if now the contractor is using the material which is not allowed by the law to carry out repairs of any building will attract negligence.

Difference between Criminal and Civil Negligence

Every person has to take care of another person while they are performing any work. This condition is very essential. The duty in negligence which a person has against another should be legal and can’t be attracted if the duty is arising out of moral, religious or ethical. If the plaintiff is not able to prove this condition, there is no case of negligence because if there is no duty to the plaintiff, there can’t be any case of damage. This condition is explained in the following cases.

In the case of Stansbele v Troman[ii], a decorator was engaged by the owner of the house to decorate the house for a particular function. The decorator took up the work and completed it. However, he forgot to lock the doors of the house and a thief entered the house and stole some things from the house. The owner filed a case in the court claiming the value of the stolen materials. The court held the decorator liable as he owed a duty of care in this case.

2. Duty towards the plaintiff

As said above the duty of care must be legal [recognized by the law]. The duty should recognize a certain relationship between the plaintiff and the defendant. It governs how the defendant should act in a certain manner towards the plaintiff. It must be established that the defendant owes a duty of care to the plaintiff. There are very landmark judgments on this front, one such most celebrated case on this front is the case of Donoghue v Stevenson[iv]where the court held that every person has a duty of care towards the neighbour. Who is a neighbour? The neighbour was defined by the courts in the same case as the people who might be affected by the actions of the defendant. If that neighbour is affected by the actions of the defendant, they can file a case in the courts for the damages they have suffered. Similarly another case came in the name of Bourhill v Young[v] where a fishwife heard the voice of an accident between the motor cyclist and a car. After sometimes she went to the same road and saw some blood shades of the dead body left on the road and suffered a saviour nervous shock and thereafter sued the representatives for the damages which she suffered. But the court here ruled in the favour of the defendant saying that the defendant does not owe duty of care to a person who is hearing the sound of the crash and then viewing the shades of the blood on the road. [also see Alcock v Chief Constable of South Yorkshire Police[vi]].

3. Breach of that very Duty to take care

The plaintiff doesn’t only need to prove that a person has some sort of duty of care towards them but they also need to establish and prove in the court that there is a breach of that very duty due to which the damages are being sought. In other words, it means that there was a standard of care which the defendant needs to take but they have breached that duty.

An Indian case on this front was the case of Municipal Corporation of Delhi v Subhagvanti[vii] where a clock tower collapsed in a very busy area of Delhi named Chandni Chowk resulting in the death of several persons. It was estimated by the experts that the normal lifespan of such towers is 40-50 years but the said tower was 80 years old, and the corporation has not conducted any kind of repairs in the tower. The court held that the corporation owed a duty of care and breached that duty and hence was made to pay the damages.

It can also be termed as ‘proximate cause’. It may not be the very first act of the defendant which caused the injury nor it may be the last act before such injury. It is any act which has reasonable consequences and which are direct in nature.

In the case of Palsgraf v Long Island Railroad Co[ix] where a person was trying to catch a running train. When it was seen by the employees of the company, they tried to help him. He had a packet of firecrackers which slipped from his hand and burst on the rail line. They injured a person on another platform and that person sued the railway company for damages. However the court here held that the railway company is not liable for any damages caused because there was no direct cause of action.

6. Harm to the plaintiff

This is the last condition that needs to be proved by the plaintiff in the cases of negligence. The plaintiff needs to prove that there is an injury to him because of the breach by the defendant. The harm can come under the following headings:

If the above six conditions are proved in the court, the defendant is bound to compensate the plaintiff for the damages caused.

Let’s now look at a condition where the plaintiff does not even need to prove the above conditions. The things or the facts speak itself.

Latin word which literally means ‘the things speak for itself’.

This is a situation where the plaintiff need not prove this above conditions to bring the liability of negligence to the defendant, instead they need to prove some circumstantial evidences and the facts of such nature that the plaintiff ought to get the compensation [see the case of Municipal Corporation of Delhi v Subhagwanti]. And then the burden of proof shifts on the defendant to prove that there was no negligence. The doctrine of ‘Res Ipsa Loquitur’ came up in the case of Byrne v Boadler[x].

The conditions which needs to be proven are as under-

There must not be any actual cause of the negligence.

It must be under the control of the defendant or anyone appointed by him for that work.

Defences against the negligence

The burden of proof lies on the defendant to prove the same, as he is the one taking the defence and not the plaintiff.

The Act of God is a force that is exerted by nature upon the earth and it is something which cannot be foreseen, and even if it can be foreseen it can’t be resisted by the humans. Any event or negligence caused in the time of the Act of God cannot be considered as negligence because of the very basic reason that the defendant could not have done anything to stop that event from happening.

The defence of inevitable accident is taken where there is no way to stop the accident from happening. This is not the Act of God because that is a super force but here it can be said that the person was unable to take reasonable care in that short span of time when the accident took place.

The tort of negligence was developed in the English courts in many cases and is also considered as a very important tort in the Indian jurisdiction. To prove the negligence the plaintiff needs to prove all the conditions stated above namely duty of care, breach, damages and cause of action. The defence of the negligence is available to the defendant in case if he is innocent.

Article-32 and Article-226: Purpose and Distinction
Role of Institutions in Promoting International Humanitarian Law
“Contract of Indemnity” Compensate for the loss