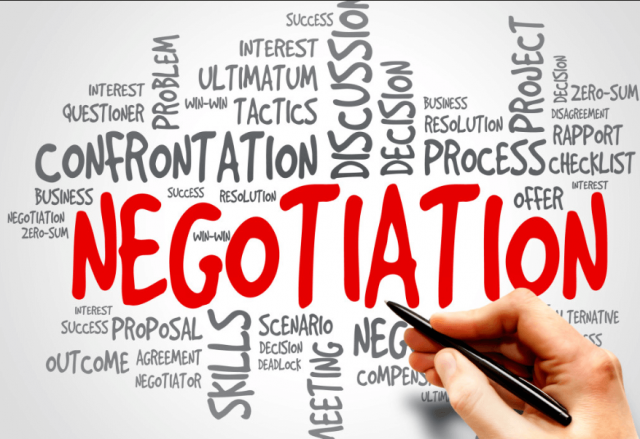 The article is about how a good negotiation is done by a negotiator who is very attentive and active while discussing and bargaining things.

It is a process through which parties solve disputes amicably by looking at each other’s profit. It is basically based on compromise and agreements, mutual understanding is must to negotiate between parties. From bargaining with a vegetable wander or the deals between two Nations, all these small to large contracts are based on negotiation because everyone wants the ball to favour them in their court. Negotiation starts from the time when the parties meet each other and they discuss what they want and at what cost.

A good negotiator is one who can make the deal in his favour without harming what he wants.

The one who has the following qualities is a good negotiator:

Examples of Some of the Negotiation

Payment of dues of employees during lockdown

The Honourable Supreme Court said that both the employer and employee must negotiate with one another on how they will solve the problem and an amicable solution should be accepted by both of them. Similar suggestions were given to the tenants and the owner of the house so that they can decide how much and when to pay the rent when they were not accommodating in the house during the period of the lockdown.

Two permanent Permanent members of the UN and Iran were parties to the deal, where Iran said that they will use nuclear power only for power generation and restrict the use of Uranium. The deal was finalized in the year 2015, but after some time Iran started testing nuclear missiles which led to breach of trust hence the U.S. unanimously pulled itself out from the deal and made sanctions on Iran also on the countries who will do business with Iran. Proper negotiation and follow of the rules could have avoided sanctions and would have been better for the citizens of the country of Iran.

Where the U.S. and North Korea were the parties and the deal was very near to finalization after three decades of talks between the officials but America wanted complete denuclearization without giving any relief in sanctions to North Korea hence the deal was not finalized. This was a very important deal for the whole world which could have benefitted all if finalized.

To settle the dispute amicably outside every possible negotiation was decided by the parties but it was not finalized and hence decided by the Supreme Court of India.

Most of the international deals fail to be compromised along with the negotiation as they are bound by restriction and have a force of sanctions but negotiation at a local level or company level are excellent sources of solving the dispute amicably outside the court as it is time-saving and economically efficient.