The NLU Consortium approaches the Supreme Court appealing against the decision of the BCI to scrap the one- year L.L.M. program 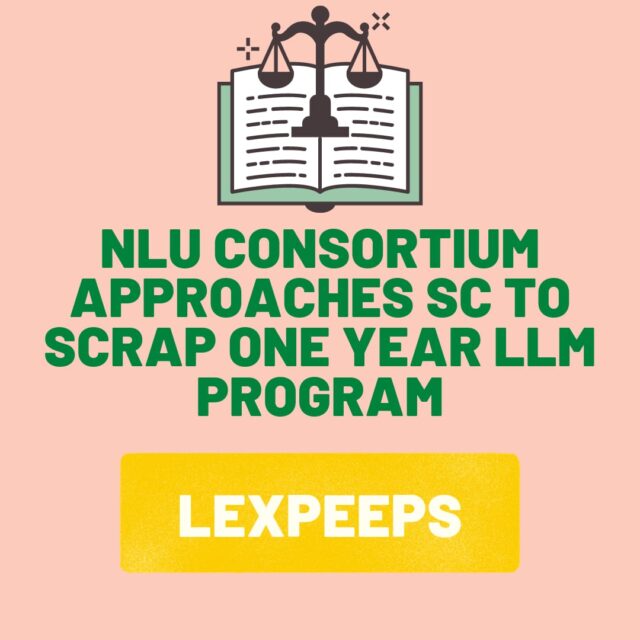 The NLU Consortium, along with the petitioners, Tamanna Chandan Chachlani and Rishabh Soni have approached the Supreme Court of India to challenge the controversial decision of the Bar Council of India to scrap the one- year L.L.M. program and derecognizing the foreign L.L.M. degrees. This appeal was heard before the bench of Hon’ble CJI SA Bobde and Justice AS Bopanna.
In a recent notification to the BCI Legal Education (Post Graduate, Doctoral, Executive, Vocational, Clinical and other Continuing Education) Rules, 2020 (Rules), by the Bar Council of India had scrapped the one- year LLM degree and had mandated that the Master’s degree be of two years spanning over a total of 4 semesters. These rules at the same time had partly derecognized the foreign LLM stating that they shall be equivalent to the LL.M obtained in India only after an LL.B degree from either a foreign university or an Indian university equivalent to a recognized degree of LL.B in India.
The counsel appearing for the NLU consortium submitted that the foundations of these rules is fallacious and reflected a gross misunderstanding of the Advocates Act or any other statutory provision for that matter. These rules further, seek to usurp the jurisdiction which is vested in other statutory provisions. Further, none of the NLUs were consulted before taking this decision by the BCI
A major contention put forth by the petitioner was that the LL.M is not a practitioner’s degree and further, BCI deals only with the enrollment requirements. Moreover, Advocates Act, under which the BCI has assumed its jurisdiction cannot be used to regulate any academic or vocational program which is not a pre requisite for the enrollment of advocates. On asking whether or not the BCI has the power to regulate the one- year LL.M degree by the CJI, the counsel for the petitioner replied that the BCI does not have the power to regulate higher education courses as they are regulated by the UGC and were brought by the knowledge commission under the HRD ministry.
When the bench expressed its inclination to issue notice, the petitioner prayed for interim relief and put forth the fact that applications for enrollment have already been started and over 5,000 applicants have applied for their enrollment at the time when BCI came up with the rules for further notification. Thus, the petitioner prayed to the Hon’ble bench to allow the status quo to continue. The bench asked the petitioner to file on the affidavit the argument that 5,000 applicants have applied for the one- year LL.M course and the fees has also been collected for the court to consider interim relief.
The BCI also stated in its notification that the entrance for the LL.M program shall be through Post Graduate Common Entrance Test in Law conducted by the BCI itself. And after its introduction, it shall be mandatory for the universities to admit students through the merit list of this entrance test.
It was further argued that this decision of the BCI was violative of the article 14 and 19(1)(g) of the Indian Constitution as they were issued without any statutory powers and are arbitrary and unreasonable. Moreover, it was contended that the notification released by the BCI is ultra vires as the power to regulate higher education courses in law lie with the UGC and not with the BCI.

2021-02-22
Previous Post: US imposes sanctions on Myanmar Leaders for the Military Coup
Next Post: FIR filed against the creators of Greta Thunberg’s Toolkit