US imposes sanctions on Myanmar Leaders for the Military Coup 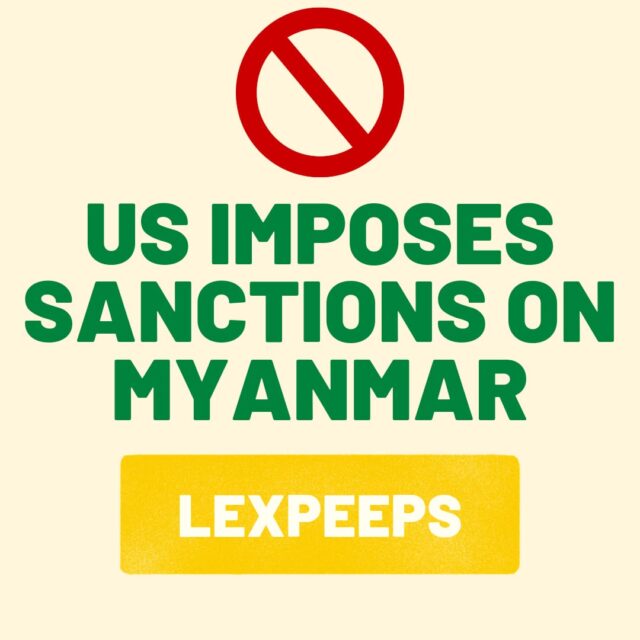 Recently, the US Treasury had in its statement, imposed sanctions on Myanmar targeting 10 individuals and 3 corporations. These sanctions came to light in the coup carried out by the Burmese military leaders. The US treasury had released the list of 8 military leaders facing sanctions and blacklisting 2 leaders for the atrocities carried out by the m against the Rohingya community.
On February 1, the military leaders of the Burmese Army had overthrown the democratically elected government of the National League for Democracy (NLD) and had prisoned several NLD leaders and had put the long- standing popular leader Aung San Suu Kyi under house arrest along with arresting several other civilians.
This undemocratic incident led to a surge of protests across the nation by several of its civilians. At a particular protesting site, in order to curb the protest, the police had taken to water cannons, rubber bullets along with live rounds of fire. In the midst of this, a 20- year- old protestor named Mya Thwe Thwe Khaing was shot in the head. This led to an outrage in protests along with a wide social media coverage as well. Leading to this, the newly elected government of President Joe Biden had taken the decisions to show its opposition to this radical and undemocratic move taken place in Myanmar
The order had put sanctions on the military leaders and their family members and their businesses and the officials connected with them. Biden had also imposed several strong export controls and freezing U.S. assets which benefit the military leaders but at the same time they have clarified that support for civil society groups, healthcare etc. shall be maintained. The U.S. govt. has also held funds worth 1 billion $ blocking the access to the military regime of Myanmar.
This bold step taken by the Democrat’s elected presidential regime is quite contrary to their stance but is welcomed by several bodies. While at the same time, this step is condemned because of the possibility that it might accrue for Myanmar side lining with China as a consequence of this approach.
But protests in Myanmar against the undemocratic regime is not a new thing. Attempts have been made of protesting against such dictatorial regimes in 1988 and 2007 as well where there were a lot of people who sacrificed their lives n the protests fighting for a democratically elected regime.

Obscene and Abusive Language: Delhi Supreme Court Prohibits TRACTOR2TWITTER from Posting Defamatory ...
The Bombay High Court Orders Release Of 3 Sex Workers And Held Prostitution Is Not An Criminal Offen...
Supreme Court Discards the Judgment of High court of Punjab and Haryana
2021-02-22
Previous Post: Internship Opportunities: 2 Internship Posts.
Next Post: The NLU Consortium approaches the Supreme Court appealing against the decision of the BCI to scrap the one- year L.L.M. program