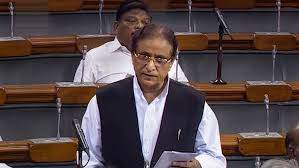 The Hon’ble High Court of Judicature, Allahabad, on last Friday, dismissed the anticipatory bail application of Azam Khan, the prominent leader of the Samajwadi Party and the Member of Parliament from his party. His motion was dismissed in kin with the unlawful appointment of more than one thousand clerks, stenographers, and engineers in the Jal Nigam of Uttar Pradesh, as he was the prime accused behind this unlawful act during his term as a minister in the SP government’s rule in the state of Uttar Pradesh.

The learned counsel of the applicant moved an application under section 438 of CrPC, i.e.- anticipatory bail, to avail some sort of relief from the Hon’ble High Court, on the account of being arrest arrested, and further taken into judicial custody in kin with the Case Crime No. 02 of 2018, charged under section 409, 420, 120-B, 201 and section 13 (1) (d) of the PC Act, Police Station SIT of Lucknow District. The learned counsel on behalf of the applicant also contended that mereloy6 serving the jail authorities with B-warrant and communicating the same to the accused, nowhere signifies that the applicant has been retained in custody and hence the bail application under section 438 of the CrPC is maintainable. The learned counsel even argued, that even if the issuance of B-warrant has been done and communicated to the accused, yet the accused is entitled to bail as the charge sheet concerning this case was filed after the prescribed period of Ninety Days, by the investigation team.

The learned counsel on behalf of the state, contended that the F.I.R. was filed on 25.04.2018 on the grounds of the inquiry set up by the Special Investigating Team U.P., Lucknow regarding the felonies of biased enrichment, the disappearance of documents and destroying them, so that it cannot be laid as a piece of evidence against the criminal conspiracy of conspiring 1300 people on the post of Assistant Engineer, Junior Engineer, Clerk, and Stenographer.

It was further perceptible that the present F.I.R. was lodged against the other four by the conducting Investigation Officer. While the applicant was taken into custody concerning another case with F.I.R. No. 980 of 2019, under sections 420, 467, 468, 471, 120-B I.P.C., P.S. Civil Lines, District Rampur, an F.I.R. No. 392 of 2019, under Sections 420, 467, 468, 471, 447, 201, 120-B I.P.C. and Section 3 of Prevention of Damage to Public Property Act, P.S. Azeem Nagar, District Rampur and put in District Jail, Sitapur. There is sheer evidence of a B-warrant issued by the court, which was received by the Jail Authorities and communicated the same to the applicant within a day. The facts and figured were laid down. Given all the facts and analysis, the applicant is considered to be in custody concerning the current F.I.R. No. 2 of 2018 and issued B-Warrant issued by the competent court under the provisions of Section 267(1) CrPC.

The division bench of Hon’ble High Court, headed by Justice Rajeev Singh, reject the motion of filing the anticipatory bail application of the accused, Azam Khan, and observed while doing, that the accused is already under detention and a B-warrant has been issued against him by the competent court under the section 267 (1) of the Criminal Procedure Code, 1973, and has also been duly communicated to him. The Court further highlighted the fact that an FIR had already been lodged against the accused on the grounds of preliminary investigation, carried forward by the SIT, Uttar Pradesh, Lucknow. The accused was held liable for the unlawful appointment of more than a thousand engineers, clerks, and stenographers giving them unjust enrichment, doing forgery, conspiracy, and destroying pieces of evidence for the same. The court also stated that “It is also evident that B-warrant was issued by the competent court on 18.11.2020 was received by the Jail Authorities of District Jail Sitapur who communicated the same to the applicant on 19.11.2020”. The division bench of the court also took into consideration, the case of Bobby (Paramveer) and Anr v. State of Uttar Pradesh, in which they highlighted the key feature that while the Criminal Court issues the B-warrant, it has to satisfy the fact that the issuance of the same is just and proper. The issuance of the same means that the accused is already under detention. Hence, the Hon’ble Court held that the application moved by the accused, Azam Khan under section 438 of the CrPC is not maintainable, yet the court opened a way for the accused to move under regular bail if he so desires.