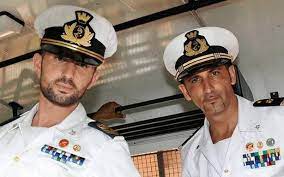 The Supreme Court had ordered closure in the fisherman killing case against two Italian marines who were accused of killing the fisherman.

On 23 February 2012, a petition was filed by the Italian Consul General and the two accused Marines to stay in Kerala High Court. The petition submitted that Kerala police had no authority to conduct an investigation in the case and that courts in India had no jurisdiction as the incident had occurred beyond Indian territorial waters. So petitioners were seeking to quash court proceedings.

The Supreme Court on Tuesday quashed against all the FIRs two Italian Marines. The bench of Justice Indira Banerjee and M.R Shah said the killing was accidental, as there was an understanding that they considered fishermen as pirates. The beach also, observed that the State of Kerala, the heirs of the deceased as well as the owner of the boat has agreed to accept the compensation amount offered by the Italian government. So, the order that the amount of will is transferred from Supreme Court registry to Kerala High Court. The amount of Rs. 4 crores to be given to each victim’s family and Rs. 2 crores to the owner of the boat.

What charges were remanded to judicial custody?

Two Italian corps marines, one class Massimiliano Latoree and another Salvatore Girone, were remanded to judicial custody for interrogation on homicide under section 302 of the Indian Penal Code.

How much compensation is given by the Italian government?

The compensation provided by the Italian government is 10 crores.

Who was included on the bench?