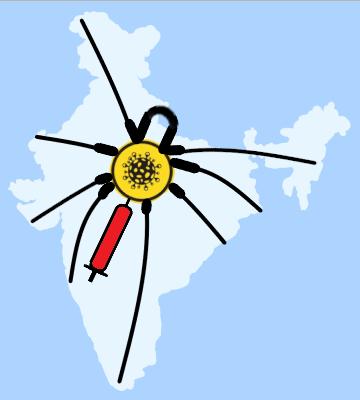 The legality of Lockdown amid Coronavirus

“Wars are not won in a day”

This Article is written by Shantam Patil pursuing BA.LL.B from HNLU, Raipur. In this article, he has discussed the legality of lockdown amid Coronavirus with the reference of Draconian Law, an Athenian law scribe under which small offences had heavy punishments.

On 11th March 2020, a 123-year-old law (so-called draconian law) was implemented and came into force by the authority of the President and Government of India.

Karnataka was the 1st Indian State to implement this law. Then after many States like Maharashtra, Delhi and others also joined the league and were followed by many others. A series of drastic and rapid events then took place in our country. People ran to the shopping malls and grocery markets, causing a tremendous situation. A heavy police force was then deployed to control the situation. Resulting in many arrests and quarrels between the public and the authorities.

Finally, Prime Minister Narendra Modi came out and announced the total lockdown in India for 21 days on 24th March 2020 at 8 pm and it started functioning from the next day onwards i.e. 25th March 2020. All Economical and other beneficial activities stopped and there was no exchange. India shut its $2.9 trillion (£2.3tn) economy, closing its businesses and issuing strict stay-at-home orders to more than a billion people. Air, road, and rail transport systems were suspended.
Then the second lockdown was announced on until May 3rd and lastly the on 01st May the GOI extends nationwide lockdown further by two weeks until 17 May.

Historically it weighs very much important because it is the first-ever all-over nationwide lockdown after Independence of India. Many situations like this occurred in India and also people of India fought with that and survived. The first-ever known situation like this happened during the British regime over India in the year 1897. There was bubonic plague spread all over the city of Bombay (now Mumbai) and the British came up with the Epidemic Diseases Act, 1897.

It is a Pre-independence era, A 123-year-old law that was enacted on the 4th of February 1897. It was evolved by the British Council to tackle dangerous epidemic diseases and was used to prevent the spread of the outbreak of the bubonic plague in India, particularly in Bombay in 1897. This act gave draconian powers to the colonial government which allows British authorities to detain any person and at any time, also it allows for medical examination of the detainee.

While introducing the Epidemic Diseases Bill in the Council of the Governor-General of India in Calcutta for ‘better prevention of the spread of dangerous epidemic diseases’ John Woodburn, the council member who introduced it, himself considered the powers mentioned in it as ‘extraordinary’ but ‘necessary’. Woodburn emphasized that people must ‘trust the discretion of the executive in the grave and critical circumstances.’

This law proved to be very stringent for Indian freedom fighters and resulted in the arrest of many freedom fighters, one of them was Bal Ganga Dhar Tilak. He opposed this act and he used the term “Military Terrorism” in his newspaper Kesari for this pre-independence draconian law.
The Act has, since then, been invoked to fight dengue and malaria in cities like Chandigarh in 2015, cholera in Vadodara in 2018.

Section 6(2)(i) of the Act authorizes the National Disaster Management Authority, headed by the prime minister, to take measures for “the prevention of disaster, or the mitigation, or preparedness and capacity building for dealing with the threatening disaster situation or disaster as it may consider necessary”. The Act also provisions for a national executive authority, which exercises powers to issue guidelines that will be in effect during the lockdown. The Disaster Management Act also casts a duty on the states to follow the directions of the NDMA as mandated under Section 38 of the Disaster Management Act.

There are other acts also which the government can exercise in situations like – war, state emergency, and financial emergency. And these are: –
Article 352 of the Indian Constitution which provides that the President of India can declare emergency in situations like war, external aggression, or armed rebellion.

Article 356 of the Indian Constitution provides that the President of India can declare state emergency when he is satisfied that the state cannot further be carried out according to the procedure established by the law.
Article 360 of the Indian Constitution provides for the declaration of financial emergency by the President of India when he felts that there is financial instability.

For a country whose population is 1.35 billion and also stands 2nd in terms of population.

Certainly, the nation-wide lockdown has proven to be more useful for our country and has helped to tackle the Novel Coronavirus. The reason why we are doing a far better play in the case of positive coronavirus patients than other powerful nations is because of the lockdown imposed all over India by the Government of India.

Also, it has attacked the economy of India very badly and some sources confirmed that it may be possible that a situation like in 1929 happened to cause a major outbreak to the economy that can happen due to this crisis.
Many of the contracts made between two parties to a contract that requires physical attention and supervision shall become void because of the nationwide lockdown and curfew-like situation. This has been provided in Section 56 of the Indian Contract Act, 1872 the doctrine of frustration. It says that “An agreement to do an act impossible in itself is void. And the same has happened. People cannot leave their house and so they are unable to carry out the performance of the contract they may have made.

All the upcoming examinations which were going to be held are cancelled and the board results of Students are delayed due to coronavirus. This would cause a severe drawback in the academic performance of fellow students of the country. Many universities and schools have started online classes for their students. And the government is launching many e-platforms for education. But only the students living in the urban area would be getting benefits from this and people living in the rural area could not because of the poor internet connectivity issues.

Many NGOs, Communities, and Social institutions are coming forward to help and giving large amounts of donations to the people in need. The Government has also exempted common people from various taxes which they pay in a normal situation.

The Government of India is doing its best to stop the spread of Coronavirus in India by taking harsh measures like lockdown, the imposition of the Disaster management act, and Epidemic diseases act. Also, the Central government is cooperating with all the state governments to provide relief and provide assistance to the needy people. India has entered into the third phase of lockdown. This is the situation in which a country requires contribution from every citizen. This is the time that people have to unite and fight against this deadly virus. Now, the time has come that every individual unites together and contribute to fighting against coronavirus.

Evolution of Concept of Ombudsman
Role of Courts in Protection of Shareholders and Creditors
Development of Environmental Laws
2020-05-09
Previous Post: Legal Analysis of Right to Privacy
Next Post: LAWS GOVERNING ONLINE CONTRACTS