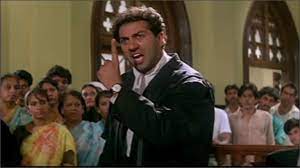 Tareekh par tareekh: Lawyer Screams in Agony and Damaged Equipment in Delhi Court over Delay in the Case Hearing

According to news agency ANI, a lawyer cried “tareekh par tareekh (date after date)” while breaking courtroom equipment in a Delhi court recently, reenacting a famous film scene. According to the report, the event occurred on July 17 in courtroom 66 of the Karkardooma court complex in the national capital.

The numerous adjournments sought by the opposing lawyer, played by the late Amrish Puri, infuriated Deol, who was portraying the character of an advocate in the film. Deol launched a monologue about how recurrent court adjournments had hampered his client’s struggle for justice before uttering the famous “tareekh par tareekh” statement in the court.

Meanwhile, Rakesh was apprehended and placed before a magistrate, who put him in judicial prison, according to ANI. Sections 186 (willfully impeding any public servant in the exercise of his official duty), 353 (assaulting or employing criminal force on any person who is a public worker), 427 (mischief), and 506 (criminal intimidation) of the Indian Penal Code have been filed against him by the Delhi Police.