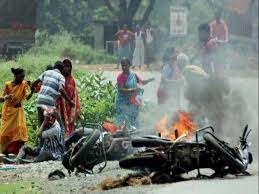 The petition filed requesting CBI probe into the case of murder of 2 BJP activists allegedly at the instance of Trinamool Congress leaders during the after poll violence is adjourned to 18th June by Supreme Court on Tuesday i.e. 15 of June 2021. The bench decided to hear the case on June 18th, after a request was made by Solicitor General Tushar Mehta regarding the matter. The Court was hearing a petition filed by Biswajit Sarkar, brother of deceased BJP member Avijit Sarkar who was brutally killed by TMC members during the after-poll violence in West Bengal.

The petition filed by Biswajit Sarkar sought the constitution of a Special Investigation Team(SIT) to investigate under the monitoring of the court the brutal murder of his brother and BJP booth worker Haran Adhikari allegedly at the behest of Trinamool Congress members.

The petition also sought directions for an investigation into the acts of widespread violence which took place in West Bengal after the Trinamool Congress was elected to power for the second consecutive term on 2nd May. A 17 years old girl and a 60 years old lady from West Bengal have also moved the Supreme Court alleging that they were raped by All India Trinamool Congress (TMC) workers for supporting the Bharatiya Janata Party (BJP) in the West Bengal elections 2021.

Both these petitions were filed in a pending case filed by Biswajit Sarkar, the brother of deceased Bengal BJP worker Abhijit Sarkar, who was brutally murdered when violence broke out after the Mamata Banerjee led All India Trinamool Congress secured a victory over the BJP in the 2021 elections.