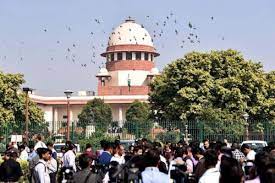 SC will continue to proceed with the hearings concerning children who have lost one or both parents, who have been abandoned or orphaned due to COVID-19.

On 28th May, The bench of Justice L. Nageswara Rao and Justice Aniruddha Bose had directed all the local authorities of districts to upload the information of children who became orphans or got abandoned by their families due to the ongoing pandemic on ‘Bal Swaraj’ the portal of NCPCR before 29th May. As per the reports of, National Commission for Protection of Child Rights, 1742 children have become orphans and 7464 children have lost either of their parents during the pandemic.

On May 29, 2021, Prime Minister Narendra Modi announced the scheme for these children which is ‘PM Cares for Children”.
According to the available information about the scheme, children who have lost both the parents or surviving parent or legal guardian/ adopted parents during COVID-19 shall be the beneficiaries of aid from the Central Government, but the scheme needs to be worked out. Till now, nobody is aware of how many children will be benefited from the scheme and how it will be implemented. The Centre has been provided some time to apprise about the scheme and execute it.