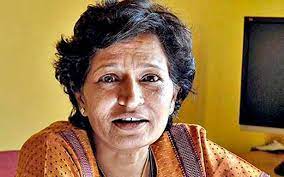 In the matter, Supreme Court states that the verdict should not be uninfluenced by the verdict of the High Court.

In the present case, A Journalist from Bangalore Gauri Lankesh who had turned into an activist had been shot down outside her place on 5th September 2017. At least 19 people are been accused of her murder out of which 9 people’s bail plea was rejected back then. It is been assumed that her murder is one of the many attacks that are been made on such activists and writers to shut their voices. She has been a very vocal journalist and used to speak the truth and it’s one of the reasons. Recently Karnataka High Court has quashed organized crime charges against one of her accused named Mohan Nayak and passed the bail plea. On being aggrieved by the judgment of the Karnataka High Court Kavita Lankesh sister of Gauri Lankesh has Filed Special Leave Petition in Supreme Court challenging this Judgment.

On Tuesday Supreme Court bench comprising of Justice Am Kahnwilkar, Dinesh Maheshwari and Aniruddha Bose responding to the Special Leave Petition of Petitioner challenging the order of Karnataka High Court stated that the decision on the bail plea cannot be uninfluenced by the order passed by Karnataka High Court.

Karnataka Control of Organized Crimes Act, 2000 (KCOCA) is a law enacted by Karnataka state in India in 2000 to combat organized crime and terrorism.

What does Section 24 of KCOCA?

Criminal syndicates are often known to commit acts of vigilantism by enforcing laws, investigating certain criminal acts, and punishing those who violate such rules.

When is the special leave petition filed?