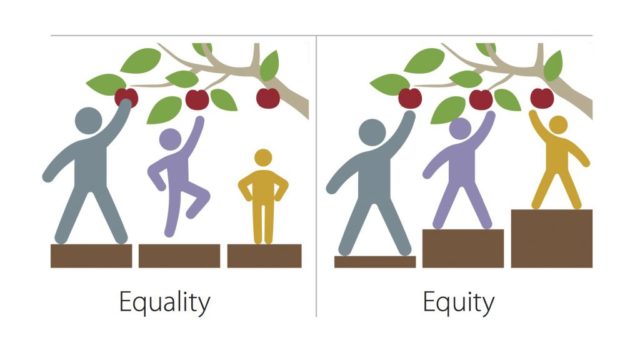 This article has been written by Parul Sharma, pursuing BBA LLB from Centre for legal studies Gitarattan International Business School GGSIPU. In this article, she has tried to explain the rule of equity.

The word “equity” is originated from the Latin word “acquitas” which means ‘levelling’. Equity is the name that we give to the set of rules that traditionally reinforce the common law where the utilization of the common law would have operated too harshly. This was done to obtain what is consistently referred to as natural justice, or more simply speaking, fairness. A Court of Equity, Equity Court or Chancery Court is a court that’s authorized to practice principles of equity, as against the law, to cases brought before it. These courts began with petitions to the Lord Chancellor in England.

The literal definition of equity is “right as founded on the laws of nature, fairness, justice”. Equity, as defined by some of the jurists, may be quoted as under: –

Aristotle defined equity as the correction of the law where it’s defective on account of its generality. Sir Henry Maine stated that equity is a body of rules existing by the side of the original civil law, founded on distinct principles and claiming incidentally to supersede the civil law by virtue of a superior sanctity inherent in those principles.

Henry Levy Ulman explained equity as a body of rules, the primary source of which, was custom or written law, but the imperative dictates of conscience and which had been set forth and developed within the courts of Chancery. Blackstone quoted equity, in its true and genuine meaning, is the soul and spirit of all law; positive law is construed and natural law is obtained by it. Hence, equity is synonymous with justice, in that, it’s the real and sound interpretation of the rule”.

The essence is to be given more importance than the form of a legal provision and the essence of equity as defined by the maxim is “equity will not suffer a wrong to be without a remedy”.

Equity is that system of justice which was administered by the High Court of Chancery in England in the exercise of its extraordinary jurisdiction. Every true definition of equity should be, to a greater or less extent, a history.

William II, who became the new ruler of England, brought a varied number of governmental reforms, and as a result, he also rebuilt the legal setup of England. Previously, the legal system of England constituted of county courts administered by the bishop and the county sheriffs, who exercised both criminal jurisdictions as well as civil jurisdiction.

William II also introduced the system of Eyre, where 4 judges, who were appointed by the King, performed their main function which was to analyse the activities of the county courts and hear cases of appeals. This system was utilized as a tool to centralize the control over the local courts, this, it provided a base for the development of common law in England. Although, the dawn of this system came with Henry II ascendance to power. He was considered as the portent of a common law system as he created a system of law, which was common to the whole of England. Some of the features of this system are as follows:

A practice was developed of sending judges from his own court i.e. a central court which was established at Westminster, to places around the country in order to decide the cases which were going on in local courts. These cases were decided by the judges, with the help of the local customs.

These cases were recorded and were filed in Westminster, at the permanent court and as time passed, these decided cases were used as a reference in other cases because of having similar facts. This principle of the law came to be known as precedents.

The local customs became the fundamental source of law as they were referred in trials to decide the points of law. A system of the jury was also developed where decided matters of law based on common law knowledge and local customs. Hence the completion of a centralized system of law with the practice of keeping a record of the decided cases for the purpose of future reference, where customs also played an important role to decide refined points of law together which gave birth to what is called “The common law”.

Equity under the Indian Legal System

In India, the doctrine of equity, which is common law, is still followed even after independence in 1947. Thus, the existing Indian legal system can be said to have a contemporaneous existence i.e. with the advent of the English in India. But as common law is based on the principles of equity, natural justice and good conscience, these principles and rules were embodied in the statute law and have been applied to the provisions made therein. The provisions of equity in Indian statute books might have their source in common law or equity or an adjustment between the two, is immaterial. Statutory recognition of the principles of equity are found in:

During the 1600s, when the enterprising English East India company invaded India for setting the trade interests, little did the Indian masses or even future rulers had the idea that they would change the whole face of the foundation of modern Indian society.

This change happened in various ways but the most crucial of those developments was to set up a new type of judicial system, which was initially based on the common law system which was followed in England. As the East India Company took over the territories which were given to them by the Mughals for the purpose of trading, they were acquired with the powers that governed all the people belonging to the English govt. and the company within these territories according to the English common laws given by the Crown.

But as the company won the battle of Plassey in 1757, the Mughal legal system was replaced by the English legal system. In the seventeenth-century admiralty courts were set up in the three presidency towns of the British i.e. Bombay, Madras, Calcutta.

Thus, these courts started to derive jurisdictions directly from the company rather than the crown to decide civil and criminal matters. In the 18th century, through a royal charter, Mayors were established, who derived authority from the crown. This was the very first step in the process of establishment of a uniform legal system in India. A system of appeals to the Privy Council, which is a body of advisors to the crown, from such courts was also initiated.

In the late eighteenth century, the mayor’s court was replaced with a supreme court in the presidency towns. This was the first attempt to form a totally separate and independent judicial system in India which was under the direct authority of the King.

The Chief Justice and subsequent Judges were appointed by the King in the court which had jurisdictions over civil, criminal, admiralty and clerical matters and was used to form rules of practice and procedure. Appeals from such courts were laid down to the Privy Council.

This court was expected to be a court of record and to hold jurisdictions as the court of Kings Bench did in England by the common law of England. And the local civil and criminal justice was left under the “Adalat system”.

Later by the mid-19th century, there was another act i.e. Letter Patents Act of 1862 by the crown, through which the High Courts were established in each of the presidency towns replacing the Supreme Court and were later established in other provinces too. These courts practised the same powers as the Supreme Courts and laid appeals to the Privy Council. The setting up of the Law Commission to review the Indian legal setup directed it to the coding of the laws, like the Indian Penal Code of 1862 which was drafted under the control of T.B Macaulay for the matters regarding crimes. The Evidence Act of 1872 and the Contracts Act of 1872 was anticipated by the same commission. Thus, all these developments helped in the creation of a judicial system in India, which was mostly based on the Common Law system of England.

Equity, in fact, plays an important role in the justice delivery system. In the modern hi-tech society with the digitalization of almost all systems, a computer device would be a nice replacement for a human being from the position of a judge because ‘feed the facts and laws into it and obtain a judgment with all accuracy’ would be a very good idea. But it would never be possible, however developed the digital world may be, for the simple reason that, to decide something, what is required is a mind, and a machine doesn’t have it nor will ever have also. To judge something, it requires conscience and to judge a case, it requires a judicial conscience. No doubt, there are so many things in the name of legal provisions, precedents, rules etc. etc. but what supersedes all is justice, equity and a good conscience which, again, stem from the dictates of conscience and each case is to be decided on its own merits for it is an undeniable cardinal principle of the entire legal system that ‘every case is a new case’

CONSTITUTIONALITY OF DEATH PENALTY
Limitations on the Freedom of Contract
Minor’s Position Under The Indian Contract Act and Nature/Effect: Minor's Agreement

2020-06-14
Previous Post: Necessity: As a Defence in Law of Torts
Next Post: The Doctrine of Territorial Nexus