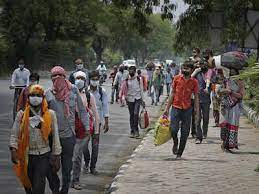 Problems and Miseries of Migrant Labourer

The sue motto case was taken by the supreme court in May 2020 to deal with the problems of migrant workers during the national lockdown which disposed of with these directions. As we know Covid-19 entered into our Lives in March 2020.

In this sue motto case where we know Covid-19 entered into our Life’s in March 2020. First It was identified in China in the year 2019 December. So, in March 2020, our Government imposed a national wide Lockdown, the courts referred to some news and media reports where migrant workers were fighting for food and transportation because of this imposition of National wide lockdown. So, we saw the fight of this migrant worker, sudden abroad imposing of this lockdown that let to flight of this migrant workers. So, at that time, because of this national wide imposition of lockdowns, where we shut down the manufacturing factories, Construction sites, etc. so because of all this there is no proper livelihood, there is no proper work, and there is no income for this people and there is no transportation even to go to their home towns. And we saw many people have lost their lives. And there was an increase in poverty and an increase in hungry. So, because of all these things, The court also observed that is the fundamental right to life enshrined in Article 21 constitution of India may be interpreted to include the right to live with human dignity which may include the right to food and other necessities. Supreme Court gives some important decisions to Central and state governments. Supreme court said that, so this person also became our part of society, it is the role that it is the government responsible to take care of this people, because of this migrant people, even though Government is providing subsidies food grains to these people were not getting this because due to lack of Ration cards.

The Bench observed that it is the bound duty of all states and governments to provide food security to impoverished persons. So, The article mainly saying that Supreme Court give a deadline of July 31st and directed central as well as state to take some steps mainly for these migrant people. Supreme Court held that and ordered states and government’s that we need to go for One Nation One Ration.

Provisions Used In This Case:

Article 21 of the constitution of India
Right to Life and Personal Liberty: This may be interpreted to include the right to live with human decency which may include that the right to food and other necessities.