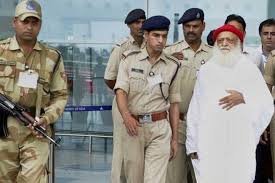 Asaram Bapu who has been sentenced to life imprisonment for raping a teenage girl in his ashram has now recently filed a bail application in Supreme Court. After getting to know this the victim’s father has moved to Supreme Court, opposing the bail plea of Asaram Bapu.

The rape victim’s father state’s that Asaram Bapu will organize revenge killing of him, his families, and eyewitnesses if bail is been granted. He submitted that the petitioner is highly influential and has a political connection and also millions of blind followers. Many eyewitnesses have already been attacked in the past by the accused and recently the applicant himself has been threatened by Asaram Bapu’s connection. And in case bail is granted to him then it is likely that he and his family will be attacked and also he has hired Kartik Haldar who killed and attacked an eyewitness who confessed to the police.

Supreme Court Denies Restoration of Possession of Land by an Encroacher
Supreme Court Refuses to Grant Relief to Disgruntled Sons Seeking to Challenge Madras HC Order
The NLU Consortium approaches the Supreme Court appealing against the decision of the BCI to scrap t...
2021-06-12
Previous Post: Doctors Cannot be Held Liable for Unavailability of Drugs: Bombay High Court
Next Post: Juvenile Justice: Comparative Analysis with the Laws of USA, UK and Canada