NEPOTISM IN THE LEGAL SYSTEM OF INDIA 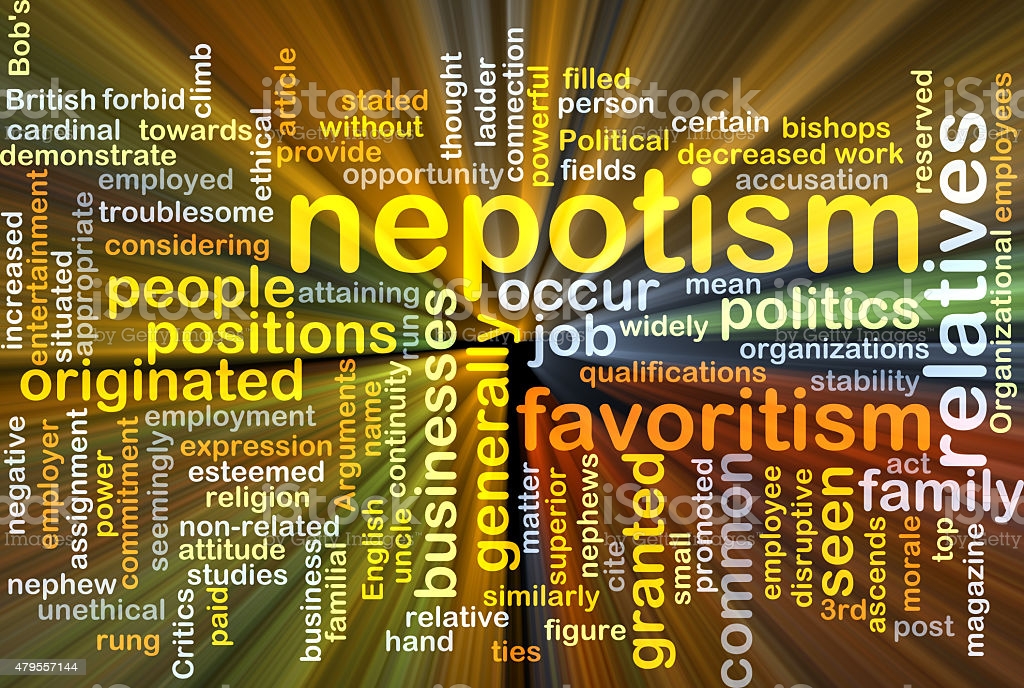 The word “Nep” of nepotism is derived from ‘Nepote’, a 17th-century variant of the Italian word ‘nipote’ which means “nephew”. Nepotism is a term that began to be used in English for the exhibition of favouritism or biased preference to any blood relative or friends by someone in a position of power and can be described as an act where a person gets unfair advantages over the others for the mere reason of his kinship and amicable association with people who wield enough power and retain status to prevail over the hierarchical structure of any particular type of domain.

[1]India’s deep-seated history of unequality and a tapering welfare state have engraved this country’s name as one of the most unequal societies in the world, with the top 1% of the population holding four times more wealth as compared to the bottom 70%. As members of such a society, we have witnessed time and again, the prevalence of such partialities; the frustration and disappointment are feelings that never wanes, not even with time. Nepotism is not only considered a social evil but also a regressive and fatal approach towards the progress and transformation of India. Additionally, the trend is inclusive not only of Bollywood but is subsisting in every other sphere that accelerates the growth and expansion of the country. For instance, Employment, Politics, Judiciary, the Film industry, Organizations, Family Business or otherwise, etc.

Corruption goes hand in hand with nepotism. [2]Studies showcase and reflect the negative impacts of nepotism in biased decision-making, unfair treatment which incurs losses and affects the company’s performance in the long run. Diminishing the potential and self-confidence of the people and making them feel disheartened, demotivated, alienated due to the obvious stigma surrounding it are few of the outcomes of such disparity. Furthermore, it not only hinders competition but also stunts innovation and as such, weakens organizations and will potentially hamper the economic development of India as a whole.

[3]Although the Indian Judiciary is the only organ of the state that selects its candidates in a hush manner and is not elected so it stands independently without being held accountable to the Republic for its judgments and is only responsible to itself. An Allahabad High Court Judge Rang Nath Pandey wrote a letter to the Prime Minister, averring “nepotism and casteism” in the appointment of judges to the High Court as well as the Supreme Court. He even raised concerns regarding judgments delivered by judges benefiting from Nepotism to be arbitrary in nature and further alleged that it was unfortunate that the basis for the appointment of judges was “kept under wraps”.

[4]Several High Courts and Supreme Court advocates and judges are alleged to have been appointed by the employment of casteism, nepotism, as well as favouritism. The allegation is based on the ground of the appointment process called the collegium which legally binds the President to heed the recommendation of the names of judges or advocates to be appointed or promoted to a tier higher or at the apex in the judicial hierarchy, putting a dent in the advocacy of accountability and independence of the Judiciary.

In the legal profession, nepotism also finds its way through Cronyism, where if an individual belongs to a certain chamber or is an ex-junior or intern, he/she has easy access to certain posts or cases by way of preference given through recommendations.

[5] The statement that ‘politics in India is not a vocation but a family business’ is more than accurate with the caste system still at the centre of India’s thriving democracy. Difficulty arises when one tries to completely dissever the fabric of family, and status-based discrimination. Let’s suppose, Meena’s father is a member of the Lok Sabha, then she might regard the Parliament as her heirloom. During the election season, parties tend to hand out tickets to relatives, and family members as though it is a family inheritance. The concept of nepotism and favouritism is rampant in the country, no matter the party. The Congress Party, run by the Nehru-Gandhi dynasty for more than sixty decades is one example, Farooq Abdullah and his son Omar Abdullah is another example of this infested disease that has now found its roots in the working of internal politics in India.

The system of joint families in India worsened Nepotism. With a nuclear family at play, a power position will be recommended or favoured to the wife, children, and straggling extended members of the family; uncle, aunty, nephews, sons-in-law, etc and will never be segregated fairly to deserving candidates just because blood is considered to be thicker than water. Also, for many, politics is simply a tool of self-enrichment as well as a gateway to corruption instead of utilizing their status of power and wealth for the betterment of the country. Money made out of corruption entices greedy individuals with an immoral, unscrupulous and deceitful disposition.

1. [6]When the internal spectrum of politics of a democratic country is filled with hereditary succession, one of the biggest affects it can have is the potential loss of faith in democracy. Dynastic governance not only demeans the democratic principles but also questions the legitimacy of democracy which can consequently result in extremist anti-government or state rebellions and movements like Maoist and Naxalite.

2. While Corruption is the outcome, nepotism is the instigator. The parasitical relationship between nepotism and corruption can be witnessed in the corruption perception index where almost all third world countries with hereditary governance perform with mediocrity.

3. The governance system of a country is affected as the paucity of distinguished administrators and policy makers at every stage and sector of hierarchy makes good governance impossible as top-notch human resources is a prerequisite of good governance.

4. The quality and quantity of leaders leading a developing country in various spheres such as socio-economic, political, entrepreneurial, religious,  global etc. deteriorate due to the fact that candidates and members of such bodies are being selected/recommended through favouritism, nepotism and bribery, the consequence of which is a hindrance to the overall progression of the country.

The other negative effects of nepotism also include the negation of talents, merits, abilities, efficiency and the consequent diminishing of self-confidence, integrity, and moralistic values. The abrogation of rules, neglecting the prevalent laws and sweeping of morality under the rug greatly affects the general credibility of public servants, breeds cynicism among the masses and leads to a perilous crisis to the well-being of society and reduces the chances of sustainability of democracy in the long term.

[7]As an act towards curbing nepotism, favouritism and corruption, the Central government by order of the Department of Personnel and Training (DoPT), headed by the Prime Minister, clarified the meaning of “members of family” under the Central Civil Services (Conduct) Rules, 1964. As per the rule of CCS (Conduct) Rules 4(1), the position of power or influence shall not be utilized by any Government servant, directly or otherwise, to secure employment for any of his family members in companies or firms. In addition, according to rule 4(3), “members of family” includes any person in relation to a government servant—spouse, children, parents, siblings, or any person related to them by blood or marriage whether dependent or not.

In pursuant of the recommendations by the collegiums of the Kerala and Allahabad High Courts, the Supreme Court in [8]consultation with the SC collegium and taking into account issues with regards to the secretariat, transparency, and complaint mechanism, directed the Centre to finalise the existing MoP and emphasized three key issues. Firstly, that the HC collegium should forward a ‘wider pool’ of names for the purpose of inclusivity and broader choice. Secondly, it emphasized the requirement for a stringent method to scrutinize the names forwarded by the HC collegium: transparent, objective and rational method is the goal. Thirdly, sources stated that the government has also deliberated the notion of setting up a permanent secretariat of the collegium for the purpose of continuity concerning the appointment of judges, even after changes in the composition of a collegium pursuing the retirement of sitting judges.

Though the concept of nepotism is unfair, redundant and unfortunately remains to be prevalent in every part of the world in variant subtleties, there are several facets to be scrutinized when it comes to examining the unfair advantages acquired through nepotism. For example, out of the five candidates who were hired to work in a well-known firm, one was related by blood to the director of the said firm. Despite fair trial and interview, without an ounce of evident favouritism, he secured the seat entirely with his sheer determination and hard work but is eventually asked to vacate or is disqualified for the sole reason of being related to a person in power. This does not only showcase the lack of proper regulation but also the failure to take into account the talent, merit and ability of the candidate and hence discriminatory. Sometimes, all that is needed to help identify the nuances of nepotism is a different pair of lens.

This article is written by Melody Khuoltaikim Singson, a first-year law student from Campus Law Centre, Faculty of Law, University of Delhi. This article intends to highlight the meaning and negative impacts of nepotism in the functioning of a democratic country like India.