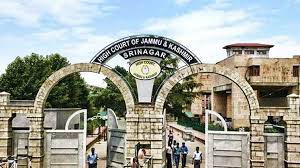 On June 10, 2021, a fifty-year-old Sajad Rashid Sofi reportedly made a comment at a Janata Darbaar saying that he has no expectations from the non-local police officers posted in Jammu & Kashmir. The accused is said to have made the comment during an interaction with locals at Mansbal in Central Kashmir and has reportedly created panic and enmity between groups.

Sofi was arrested by the Jammu & Kashmir police under Section 153-A of the Indian Penal Code for promoting enmity between groups. To this, Sofi proceeded to move a bail application before the court of the Judicial Magistrate, Ganderbal.

The bench of Judge Fakhr Un Nissa, on June 12, granted interim bail to Sofi till June 21, 2021, subject to various conditions. However, the police kept him under preventive detention, claiming that he was a potential “threat to peace” and that he could harass the witness and obstruct the investigation.

The legal counsel of the applicant submitted that he has been falsely implicated in a frivolous case, of which he does not know of. He further stated that the applicant is the only source of earning for his family and if not released on bail, the family will die of starvation. Sofi’s advocate further ensured the court that Sofi will not harm or tamper with any part of the investigation.

The prosecution contended that the accused is involved in a non-bailable offence and thus, the accused is not entitled to bail as a matter of right. He further stated that there of credible evidence available against the accused and the concession of bail in the favour of the accused will harm the investigation.

On June 15th, the court stated that bail is a rule and its rejection is an exception. Bail in a non-bailable offence cannot be refused without supporting it with a strong reason although bail is ultimately at the discretion of the court. The court further stated that it has sufficient reason to exercise discretion of bail in favor of the applicant and granted interim bail up to 21st June, provided that he will furnish surety and personal bonds before the SHO concerned.