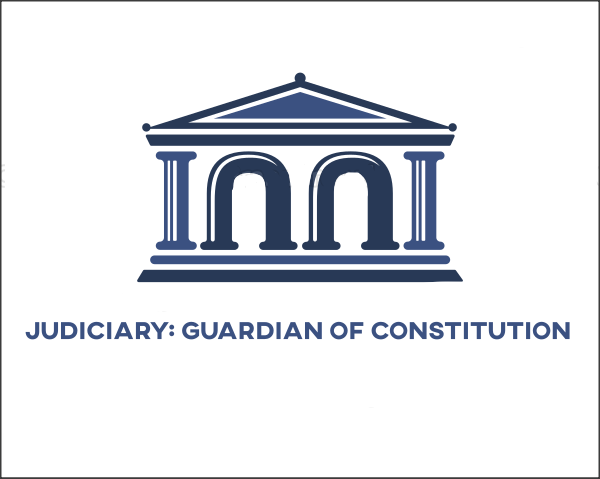 This article is written by Deepika, pursuing BA-LLB from IIMT & School of Law, GGSIPU, Delhi. In this article, he has discussed the importance of judiciary as the third pillar of democracy and independence of the judiciary.

Judiciary is considered as the third pillar of democracy, as the role of the judiciary is indispensable in a democratic system of governance. Judiciary plays a vital role in order to maintain a balance between individual interest and society and also ensures that the law of land is implemented in its true sense. Merely mentioning of fundamental rights in the Constitution without any provision of their proper safeguards them, serves no purpose. Obviously the very existence of a right depends upon the remedy for its enforcement. For this purpose, an independent and impartial judiciary with a power of Judicial review has been established under the Constitution of India. It is the custodian of the rights of citizens. Besides, in a federal constitution, it plays another significant role of determining the limits of power of the centre and states and also checks the misuse of power by legislature or executive by the instrument of Judicial review. The judicial system in a country is central to the protection of human rights and freedoms. Independence of judiciary is a pre-requisite for the realization of a democratic society based on the principle of rule of law.

The independence of judiciary is a sine qua non for the very existence of democracy.  judicial independence means the freedom of judges to exercise judicial power without any interference or influence. It requires that judges should not subject to control by political or executive branches of government and they should get protection from any kind of threats, interference or manipulation which may force them to unjustly favour someone. Only an independent and impartial judiciary can protect the rights of the people and provide equal justice without fear or favour. The judiciary in addition to maintaining the supremacy of the constitution is also the guardian of the fundamental rights of the people. So whenever there is unreasonable interference in these fundamental rights of any individual the judiciary comes to take action.. Judicial independence is a significant component of government culture in every country. It is shaped by relations between the branches of government and is one of the basic values which lie at the foundation of the administration of justice. The culture of Judicial independence can only exist in a system which is based on the doctrine of separation of powers. Though in India separation of power is not in its true sense, there is both structural and functional overlapping at many instances but at the same time within this type of arrangement in our country sufficient independence is given to judiciary to promote a society based on the principle of rule of law and for realising the ideals of social, economic and political justice given in the preamble of our constitution.

Nature and scope of independence of judiciary

The nature and idea of independence of the judiciary is of modern origin, It got recognition after the evolution of the concept of separation of powers. The dictionary meaning of independence is ‘the state of being not dependent on another person or things for support or supplies’. In a literal sense, independence means the absence of external control or support. In legal point of view independence of judiciary mean the power of upholding without fear or favour, the rule of law, personal freedom and liberty,  equality before the law and impartial and effective judicial control over various actions of the government. independence of judiciary means a fair and unbiased judicial system of a country which can afford to take its decision without any interference of the executive or legislative branch of government.

In a civil society, we want some of our relations with each other and with our government to be regulated by reasonably well define laws setting out mutual rights and duties and whenever disputes arise about these legal rights and duties, we want a mutually accepted third party adjudicator to settle the dispute.

Necessity for independence of Judicial

In democratic countries judiciary is given a very place this is because the courts settle disputes and deliver justice not only in disputes between one citizen and another but also resolve disputes between any citizen and state or the various organs of the state. The need for an independent judiciary is indispensable in a country having written constitution as the constitution is considered as the basic law of the land and it requires some impartial authority to interpret it. In the absence of such authority, the constitution would create a disorder in the society by having thousands of interpretation of a single provision. So the judiciary plays a significant role of interpreting the law in the case of any ambiguity and applying the law and further adjudicating upon the controversies between one citizen and another and between a citizen and the state. The architects of the Indian constitution were conscious of the very significant and special role of Judicial review and acting as a guardian of fundamental rights assigned to our judiciary so the salient feature of independence of judiciary which is also one of the basic features of the constitution was incorporated in our constitution so that the judiciary can function without fear or favour.

The primary need for the independence of the judiciary rests upon the following points:

Judiciary acts as a watchdog as it has to ensure that all the organs of the state function within their respective areas and according to the provisions of the constitution.

Any ambiguity regarding the provisions of the constitution is interpreted by the judiciary. So for unbiased interpretation, we need an independent judiciary.

All the disputes are adjudicated by the judiciary. It is expected of the judiciary to deliver judicial justice and act in a fair and unbiased manner. This can only be done by an independent judiciary

So, for the maintenance of the rule of law and fair judicial administration, an independent judiciary is of utmost importance.

They can’t be removed from office except by an order of the president and that also only on the ground of proved misbehaviour or incapacity, supported by a resolution adopted by a majority of the total membership of each house and also by a majority of not less than 2/3 of the member of the house present and voting.

The salaries and allowances of the judges of the  Supreme court and High court are not subject to the will of the legislature. They are fixed by the constitution and charged on the consolidated fund of India and state respectively.  They are not subject to the vote of the legislature. During the term of their office, their salaries and allowances cannot be altered to their disadvantage except in grave financial emergency.

Neither in the parliament nor in the state legislature a discussion can take place with respect to the conduct of a judge of Supreme court or High court in the discharge of his duties.

The Supreme court and the High court have the power to punish any person for its contempt(Article 129 and 215).

Article 124(7)  doesn’t allow a retired judge of the Supreme court to appear and plead in any court or before any authority within the territory of India.

The supreme court and High courts are given authority to recruit their staff and frame their own rules.

Cases on independence of judiciary

The independence of judiciary is adequately guaranteed. However in judges transfer case I (S. P. Gupta v. Union of India) The supreme court held that the word ‘consultation’ under Article 124& 217  did not mean concurrence and the executive was not bound by the advice given by the judges. Thus the power of appointment big the judges of the supreme court and the transfer of  High court judges was solely vested in the executive from whose dominance the executive was expected to be free.

Thus the executive element in the appointment process was reduced to a minimum and any political influence is eliminated.

The constitution of India provides for a judiciary which is independent. Independence of judiciary is important for the purpose of fair justice as judiciary acts as a watchdog by ensuring all the organs of the state function within their respective area according to the provision of the constitution.  Interference of legislature or the executive in the proceedings of the judiciary can bring an element of bias, threat, fear and manipulation which can pose a great danger for a democratic society wedded with rule of law. A judiciary acting under fear or pressure can shake the roots of democracy. So an independent judiciary is of paramount importance for upholding ideals of a democratic state.