EVERYTHING YOU NEED TO KNOW ABOUT E-CONTRACTS IN INDIA 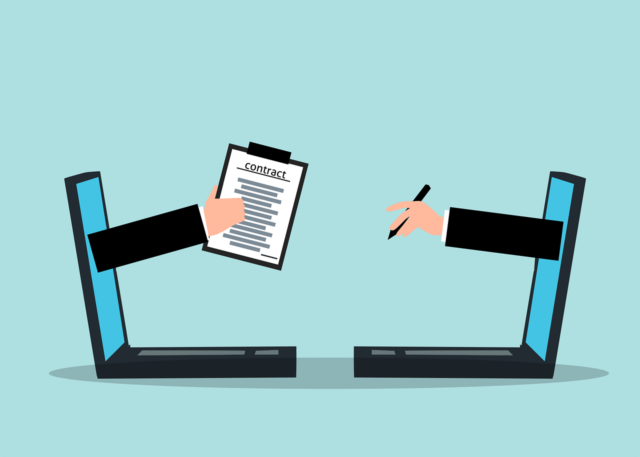 Contracts have become an inextricable aspect of our daily lives. We are regulated by contracts in our everyday lives, some of which we are aware of and some of which we are unaware of, whether we are purchasing a commodity from the market or renting a cab. In today’s world, an e-contract can be anything from purchasing a product online to signing an international treaty via the internet. In an e-contract, the offer, invitation to offer, counteroffer, acceptance, and other communications are all done electronically, and the result is an agreement. We all know what contracts are but what exactly is an e-contract.

When parties enter into contracts with each other and engage face to face, it is significantly easier to avoid mistakes than when they are separated and contract with each other using the internet as a medium. Electronic contracts are those that are made through e-commerce and do not need the parties to meet in person. These contracts are essentially the same as paper-based commercial contracts, with the exception that the business transactions are undertaken and closed electronically. The growth of e-commerce enterprises throughout the world has been propelled by technological advancements and globalization.1

Various legislation, including the Indian Technology Act of 2000 and the Indian Evidence Act of 1872, have contributed to the popularity and legality of E-Contracts. The I.T. Act specifies the attribution, acknowledgment, and transmission of digital statistics, as well as safe electronic procedures. The IT Act acknowledges the agreement’s core capabilities, which include proposal communication, proposal attractiveness, proposal revocation, and acceptance, as the case may be, which will be conveyed either in digital form or by means of a digital record. Furthermore, under the Indian Evidence Act, a settlement’s popularity is determined by the time period “record,” which includes any records included in a digital record that is delineated on paper. Furthermore, the Indian Evidence Act recognizes the popularity of a settlement by defining “record” as any records contained in a digital record that is sketched on paper, stored, recorded, or replicated on optical or magnetic media created by a computer. Such facts will be acceptable in any procedures, with no similarly proof or production of the authentic document before the concerned authorities, and shall be appeared as proof of any content of the authentic or any reality described therein of which direct evidence would be admissible. 2

In India, the validity of e-contracts is debatable

The Indian Contract Act of 1872 acknowledged customary agreements, which are created by the voluntary assent of contracting parties who are able to contract for a lawful consideration with a legitimate intent and are not specifically ruled void. As a result, there may be no provision in this Act prohibiting the enforceability of electronic agreements as long as they contain the essential elements of a legitimate settlement. The ability to freely agree is one of the most important aspects of a legal contract. On E-contracts, there is frequently no room for discussion.3

Issues and Challenges of an e-contract

Decision on the Applicable Law

Decision on the Court Jurisdiction

E-contracts provide for a wide range of causes of action to arise in a variety of geographical places. This might result in cases being filed in many locations. Defending litigation in several places might be both costly and time-consuming. As a result, all online contracts should include a forum selection provision. Limiting the vulnerability of online service providers to a single jurisdiction makes strong legal sense. As a result, the online service provider has no alternative but to submit to a single set of rules and related laws. The user has no alternative but to accept the service provider’s Standard Terms and Conditions by clicking the “I Agree”, “I Accept” or “Yes” text or button onscreen.

The mode of an e-contract is the result of a revolutionary shift in changing global technical know-how, but it has also been discovered that the laws governing such e-contracts are ambiguous in nature and must be dynamic in order to accommodate the current changing scenarios of e-commerce, including an e-contract. In India, the law covers all aspects of e contracting. However, technological advancements will provide new obstacles for legislators and government agencies. To stay up with changing technology, laws must be updated and improved on a regular basis.

Mergers and Acquisitions'
Definitions and Development of Law of Tort
Rights and Duties of Bailor and Bailee
2022-02-06
Previous Post: Internship Opportunity at Sāmya Legal (Hybrid)
Next Post: ARJUN PANDIT RAO VS KAILASH KUSHANRAO