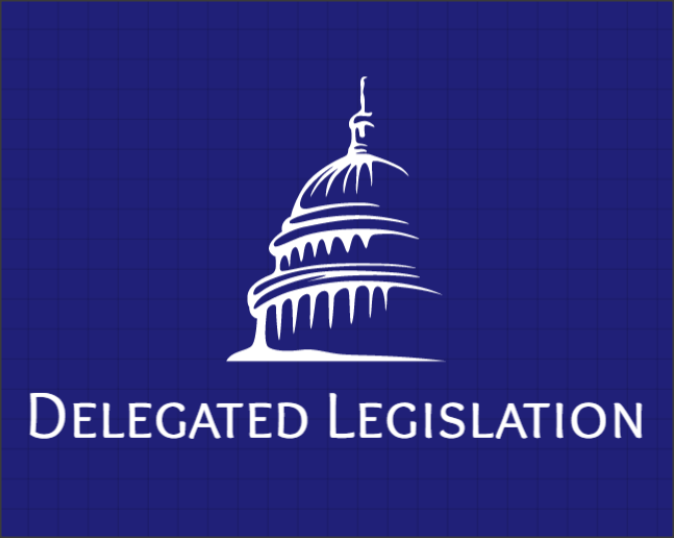 Mansi Tyagi, is a student of Symbiosis Law School, Pune. In this article, she has discussed the rules and principles concerning the Delegated Legislation in India. Also, she has tried explaining the major issues with the same that needs to be tackled. And in conclusion, she has tried putting forth the contemporary situation regarding a valid delegated legislation.

What is Delegated Legislation?

To get a simpler idea, the parliament in India is a supreme legislative body, while any other authority making law will be considered a subordinate source of legislation. Delegated legislation is one such important and emerging example of subordinate legislation.

What exactly means by the term ‘Delegated Legislation’?

Black’s Law Dictionary defines ‘Delegation’ as “the act of entrusting another with authority or empowering another to act as an agent or representative”.

Thus, Delegated Legislation comes down to how the Legislative authority entrust other departments of the government itself to make law instead. Also known as Executive Legislation, Delegated legislation refers to where, unlike its usual function of executing’ the law, the executive branch makes laws. A law made by a delegated authority is the same as an act passed by the parliament. Since time immemorial, there have been several reasons for the evolution of such a kind of legislation.

The concept of a Welfare state has multiplied the functions of a government, including those of lawmaking. The surging need for law has made the process way too lengthy for the lawmakers to do alone. And that’s where Delegated legislation came into existence. Not just it shared the burden of law-making subject matters, but also gave the legislative to elaborate and discuss on more delicate and critical issues.

Is it prospective or Retrospective?

One of the earlier issues regarding Delegated Legislation that was posed before the judicial authorities was whether it stood a prospective or a retrospective effect. However, instead of handling situations factually, the Hon’ble Supreme Court of India went ahead to lay down principles regarding the effects of such delegated legislation in the case of Federation of Indian Mineral Industries and Ors. v. Union of India and Ors. It laid down three basic principles concerning the subject:

The main purpose of a delegated legislation is to supplement and not to supplant the law. However, such legislation has its own inevitable evils. To safeguard such laws, there are certain ways through which delegated legislation can be controlled. These ways of control are divided into two, direct and indirect. While direct controlling includes control and supervision of Parliament; the indirect control includes the judicial control and review process. One hand the parliament always has the general control to alter any bill before its made into law. Also, after such laws are made by some other authority, the parliament always has the power to amend or repeal such law if it does not serve the purpose why the delegation was made in the first place.

On the other hand, the judiciary has the power to declare any law void that goes against the law of natural justice and good conscience. Also, the delegated law which is ultra vires in nature can be held repugnant by the judiciary without being able to annul or amend it. There are other indirect controls over a delegated legislation as well. This includes giving the delegation to a trustworthy authority to avoid any defect; publicize the law effectively to get a vigilant public opinion to avoid any arbitrariness, and; taking experts’ opinions on such laws to avoid any ‘blanket’ or vague legislation.

After understanding the controls over delegated legislation, now we move on to another important question. ‘Why Delegated Legislation?‘

The contemporary societal needs have made the law-making procedure too complicated for any ordinary person. While it is a delicate issue at hand, there are certain benefits that make delegation the best possible way of making supplementary laws. Here are the reasons why delegated legislation works in India more efficiently:

Despite the benefits like reducing workload and adding expert details, delegated legislation poses certain threats to the supreme authority of legislation that even the controls are inadequate to handle. Some of them include:

To curb these demerits, prima facie the authority should be given to a trustworthy subordinate department and nothing less than that. At the time of sanctioning of such law, the delegating authority shall be consulted. Also, the publicity of such law should be unprecedentedly made on a more alarming scale allowing the public to give their feedback which can further be used to amend or revoke such law. Prior to its coming into force, all such laws should be completely checked and discussed upon by the legislative. In case, the law avoids such deliberate discussion, the judicial review and supervision control will thereby minimize any chance of them being defective.

What cannot be delegated?

While many rules, regulations or by-laws in India are a product of delegated legislation, there is still a circumference of scope within which only such delegation can be made. Not everything and anything can be delegated to the executive.

In the case of Delhi Laws Act, 1912, In re v. Part ‘C’ States Act, 1950, It was held that the parliament cannot delegate what construes ‘essential legislative features’ which basically means deciding upon the legislative policy and then converting it into binding regulations. Therefore, what can be delegated is only what comprises the ‘non-essential’ functions of the legislative. Also, it held that since India followed the English model of parliament, which thus made the executive accountable to the legislative, and thus the separation of powers didn’t exist in India. This in turn validated the principle of delegated legislation.

In the case of Ajoy Kumar Banerjee v. Union of India, The principle of Delegated legislation was laid down as, “This principle which has been well-established is that the legislature must lay down the guidelines, the principles of policy for the authority to whom power to make subordinate legislation is entrusted.” The most enchanting problem that the delegation of legislative powers faces is its validity. In the most controversial and infamous case of Delhi Laws Act, 1912, In re v. Part ‘C’ States Act, 1950, the three tests for a valid delegated legislation were laid down:

Sir Cecil Carr remarks, “The legislature provides the gun and prescribes the target, but leaves to the executive the take of pressing the trigger”. Delegated Legislation permits the executive to pass the law rather than the parliament. It is often argued that India follows the principle of ‘delegatus non-potest delegare’ meaning that there is a prohibition on delegation of power by the parliament since it is the one who itself has the delegation work from the supreme law to make laws for the state.

However, in the In re Delhi Laws Act case, the court took the view that delegation was a part of legislative functions, and since India doesn’t follow the stricter form of Separation of powers, this principle of ‘delegatus non-potest delegare’ does not apply in India. Thus, delegated legislation is a valid legislation unless limited by the guidelines lay down by the Hon’ble Supreme Court of India in the form of the three tests. As for the demerits such legislation poses, Dr. C.T. Carr has already suggested that the safeguards have to be exercised against the otherwise inevitable evils of the delegated legislation.

Delegated Legislation, if handled carefully, is a boon for any welfare state. Its features of being made by an expert ministry and having detailed technicalities, makes it a better version for having timely speedy laws as per the changing needs of the society.