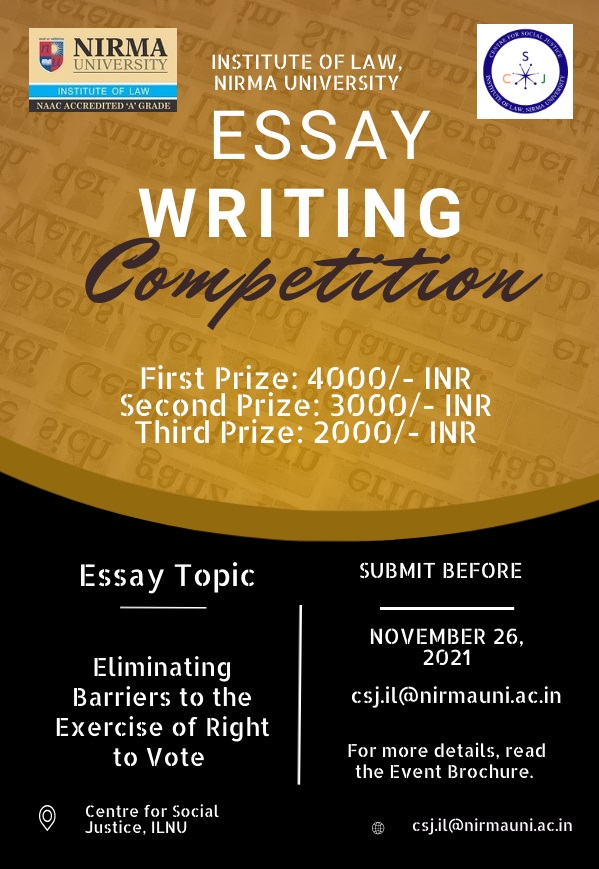 About the Institute of Law, Nirma University

The Nirma University Institute of Law’s Centre for Social Justice is a research centre. The Centre engages in debates about critical social issues and how they intersect with the law.

The Centre’s mission is to promote social justice causes via rigorous research, collaborations, and knowledge exchange.

About the Essay Competition

On the topic of ‘Elimination of Barriers to the Exercise of Right to Vote,’ the Centre is holding its first essay writing competition.

One of the most important ways to participate in democratic government is to vote in elections. It ensures that the current government is evaluated on a regular basis, and that the people have the opportunity to elect their representatives. The mere promise of a right, on the other hand, is insufficient to ensure that it is meaningfully exercised by citizens.

Although the right to vote is a statutory right, the Supreme Court has determined that exercising it is a basic right guaranteed under Article 19(1)(a) of the Constitution.

Participants are asked to investigate the constraints that may impede one’s ability to exercise one’s right to vote in the essay and offer ways to overcome those limitations.

The competition is open to students who are currently enrolled in and pursuing a UG (Bachelor’s) or Master’s Degree at any University/College in India.

Members of the ILNU’s Centre for Social Justice are ineligible to participate in the competition.