AN OVERVIEW OF DEFAMATION 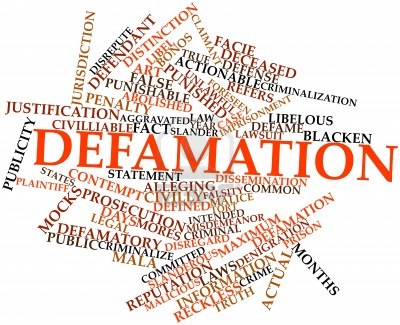 Every man has the right to uphold his reputation inviolately. The right to reputation is recognized as an intrinsic personal right of any citizen as part of the right to personal security. The term defamation means an intended false communication, written or spoken, denting the reputation of an individual by diminishing the respect, esteem or confidence through disdainful, hostile or unwelcome opinions or feelings towards a person. In simple words, defamation is the act of making false statements, verbally or published with an intent to dent the reputation of the plaintiff.  Defamation is stated in section 499 of the Indian penal code 1860, and the punishment for defamation is stated under section 500 of IPC, according to which a person who commits an offence under this section shall be liable for a simple term of imprisonment of two years or a fine or both. Defamation generally entails the publication or assertion of false statements without any justification. No one has the right to cause loss to the reputation of others with mala fide intentions. Therefore, the laws elucidating the areas of defamation simply balance the right of freedom of speech and right to protect reputation by imposing reasonable restrictions on the fundamental right of freedom of speech and expression under Article 19 (1) (a) of the Indian Constitution.

CONSTITUTIONALITY OF SECTION  499-500 OF IPC

The reputation of an individual cannot be allowed to be condemned at the shrine of the right of freedom of speech of the other. Therefore, there is no point in the assertion of the modern law of defamation being unconstitutional. The need to strike a balance between Article 19 and Article 21 is crucial in the modern world. Unlike the other unyielding provisions of the IPC, Sections 499/500 has four definitions and ten exemptions, attaching necessary content and scope to the crime constituting significant hypothetical scenarios for the exclusion of trivial complaints. Section 199(1) of the Code of Criminal Procedure protects freedom of speech by placing an obligation on the plaintiff to file a criminal suit without requiring state machinery. This, in effect, weeds out many redundant alleged victims who are not able to bear the considerable logistical, physical and financial burdens of addressing the complaint. A simple misuse or violation of the law, current or potential, may never be a justification to make a clause unconstitutional. The Supreme Court held that the statutory provisions of defamation are constitutionally acceptable and do not interfere with the rights of freedom of speech and expression. The Court held that, given the wide and far-reaching scope of freedom of speech, the right to freedom of speech and expression is, like all freedoms, “completely sacrosanct” but “not absolute.”

In the case of Subramanian Swamy v. Union of India, [1]a petition concerning the legalization of defamation was filed, the petition questioned the constitutional validity of Sections 499 and 500 of the Indian Penal code of 1860, which constituted an unjustified limitation on freedom of speech and expression. The apex court held that criminal defamation under Sections 499 and 500 did not infringe Article 19(1) (a) as it is a fair constraint under article 19(2). Sections 499 and 500 of the IPC were held to be fair, non-discriminatory and non-arbitrary and do not infringe the right to equality granted under Article 14 of the Constitution.

The very first vital aspect of defamation is that the statement or the assertion made to the plaintiff must be defamatory and false, and it must seek to diminish the eminence or reputation of the plaintiff. The method to verify the defamatory nature of comment would depend on the inclination of interpretation by the rational and prudent members of society. Furthermore, if the false assertion has created a feeling of hostility, disdain or animosity, a person cannot take the defence by a vague justification of absence of the intent to defame the plaintiff. The defendant’s liability will be neutralized if the statement is privileged. However, a mere hasty gesture or statement being spoken in a fit of rage, or a vulgar abuse to which no listener could connect any fixed intent to harm a person, would not contribute to defame an individual.

In a suit for defamation, the plaintiff has to establish that the defamatory assertion was made against him. The intention of the defendant to defend the plaintiff would be immaterial if the plaintiff establishes the above statement. The defendant’s liability will be neutralized if the defamatory statement was made against any third party other than the plaintiff. In the case of T.V., Ramasubha Iyer v. A.M.A Mohideen [2]Court held the defendants liable for the publication of a statement without any intention of defaming the defendants. The statement stated that a particular individual carrying the business of incense stick to Ceylon had been arrested for an offence of smuggling. The plaintiff was also one of the persons engaged in a similar business and, as a result of this statement; his reputation was severely damaged.

With the advent of various communication platforms, the ambit of defamation has also widened. Defamation has been further classified into Slander and Libel. It must be noted that defamation is the genus, whereas slander and libel are its species.

At the same time as determining the question of liability, the Court must take into account the following issues in libel:

Truth is an absolute defence. If the assertion made is true, it does not constitute defamation even if it was published maliciously. The burden of proof is on the defendant who claims the defence. For example, A publishes about B for being indulged in wagering and B filed a suit against him. If A is able to justify or prove it, B’s claim will be turned down. In the case of Radheshyam Tiwari v. Eknath,[3] the defendant was unable to show the evidence published by him and was thus held accountable for defamation.

There is nothing defamatory which is a legitimate reflection on the subject of public interest. The defendant may make use of this defence if he has simply made a reasonable and fair statement in a matter of public interest. This defence is focused on public policy, which allows every citizen the freedom to express and criticize, without any negative intent, the work or actions of public officials, actors, writers and athletes, as well as others whose career is centred on public attention. Any fair and reasonable opinion on a matter of public interest is also protected, even if it is false.

It grants the person an absolute right to make a comment, even though it is defamatory, that the person is exempt from liability arising out of a defamation suit. Generally, absolute privilege exempts defamatory comments made:

During the judicial proceedings or,

By the officials of the Government or,

By the Legislators during discussions and debates in Parliament or,

During the political remarks in the parliamentary hearings or,

The conflicts and rants between husband and wife.

A statement or assertion made expressing views or opinions doesn’t fall under the ambit of defamation unless it is a statement of fact. For example, if a person said that he thinks an athlete unattractive, the statement is just an opinion. Furthermore, if he says that the athlete is a drug addict or that had indulged in match fixings, then it would be a defamatory comment. If this statement results in the termination of the athlete, due to the false statement, then it will fall under the sphere of defamation.

If the plaintiff agrees to the argument made, there will be no defamation. The consent of the plaintiff confers an absolute right on the publisher, it is irrelevant whether the plaintiff understood that the details accepted for publication was defamatory or not. Consent may be expressed through words or actions, including inaction. If consent is obtained unlawfully or by an unsound mind, it will be invalid.

The aim of section 499-500 of IPC is to prevent people reputational damage arising out of false assertions or allegations made against them. However, it is also in alignment with the right to freedom of speech and expression, because people can make true comments and share their opinions. This field of law aims to protect the image of an individual from damage by restricting unfair speech. In different cases, the Supreme Court noted that the realm of freedom of speech and expression is “inviolable” but not “absolute.” Defamation is an infringement of reputational value. The law of defamation is designed to protect people’s reputation from unreasonable interventions. Through reality, its key purpose is to impede freedom of expression and to shield influential individuals from scrutiny by allowing the people to sue for the publication of false and malicious comments.