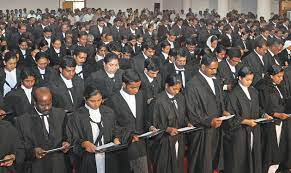 Advocate’s Dress Code to be Changed: Allahabad HC Issued a Notice to the Bar Council

The plea for change in dress code for advocates has been brought under Allahabad HC on Friday and issued a notice to the bar council of India. Where the existing dress code of black coat and the robes for lawyers were alleged against the climate condition of India. This was held by the under the bench of Justice Devendra Kumar Upadhyay and Justice Ajai Kumar Srivastava.

The plea also started quashing which mandates the advocates to wear black robes before the court. Also prays to change the dress code of all judges of courts, tribunals, authorities, as prescribed under the advocate’s bar council of India, rules 1975.

The petitioner contended in the plea for change in dress code is not before the climatic condition of the country but the main notion is that the white color band is indicating the Christianity symbol and the white sari and salwar kameez for the women is the symbol of widow ladies as per the Hindu tradition. Then the petitioner also challenged the provisions of the BCI rules of chapter 4 which was framed in 1975 under section 49(i)(gg) of Advocates Act 1961. This was alleged beyond the powers of the constitution by violating the article 14, 21 and 25. And changing the dress code of the color back and white is like completely breaking the tradition that has been in force as a sought of custom.

Criticizing this the petitioner asked the bar council to change the dress code in the pattern provided for the navy, air forces, and army. So bench directed this issue to the center and the high court administration to their respective responses by August 18.