A look into the Sources of Law 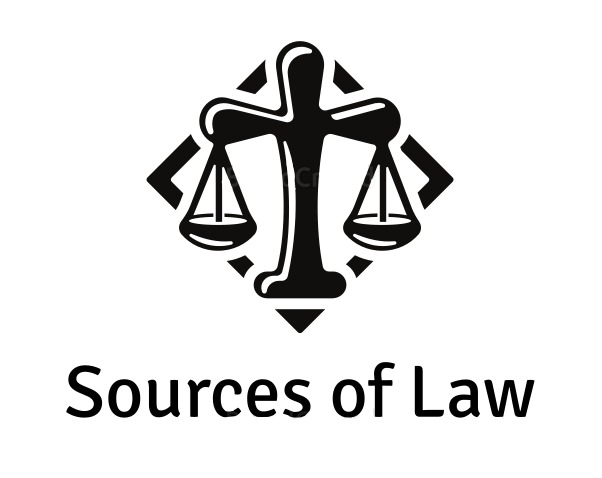 This article has been written by Yash Dodani, a second-year student at NALSAR University of Law. He has explained various sources of Law.

The word Law is a very important term today. It comes into all sectors of the society and working of people. It governs the behaviour of individuals and groups including artificial persons from their private to public life. Law has entered into all the aspects of the society. It regulate such behaviour by enacting various statutes and legislations. But are the enactments only the source of law? The answer to this question is ‘NO’. Apart from the legislations, there are various other sources of law. These sources are judicial precedents, customs, morals, equity, jurist writings and various expert opinions. These all are the founding lines for the law that we see today and will continue to see. The law can never be separated from the life of an individual ever, because the society is not ideal and people will tend to do something that may harm others. Let us now look and analyse these sources one by one. Before going into that, lets first understand what is the meaning of the term ‘sources of law’.

The term ‘sources of law’ has different meanings differing from the schools to schools. The positivist school used the term to indicate that the sovereign is the State and it is the only authority to make the laws. The sources of law can also be used as a subject matter of the law. Fuller said that the judges are the interpreters of the law and they can decide the case on some set principles and referred those principles as the sources of law. There is no set classification of the sources of law and they are not a complete list. Various authors have defined various sources according to what they understood of the term law itself.

Keeton had classified the sources of law into two broad types

The word legislations has been formed out of a Latin term called Legislatum which means making of law. Salmond defined legislation as “Legislation is that source of law which consists in the declaration of legal rules by a competent authority.”

The positivist school of thought believes that the law is made by a sovereign authority and that law is a command which is the will of the State. The process of making a law is called as legislation. The positivist also believed that the law which is made by the Sovereign authority is only the authorised source of law. They also went on to say that the judiciary is a mere interpreter of the law and can’t take up the authority of making the law. They also rejected that the customs are a valid source of law, because of the sole reasons that they were not made by the sovereign State. However, the historic school said that the customs give rise to the legislations because the customs are the one who gave shape to the legislations and legislation are only the written form of the custom which the people have agreed upon. These two opinions are literally opposite to each other.

Salmond has classified the legislation into two subgroups:

Judicial precedents are one of the important sources in the field of development of the law. These are some of the principles which are used by the courts in case there is no written legislation or the statute. The courts can decide on a particular case which has a particular fact situation and if that decision is used to reach a decision in a similar facts situation, it becomes a judicial precedent. Majority of the law of torts is based on the judicial precedent. However, some of the jurists have said that the precedents can’t be said to be the valid source of law. The reason which almost all jurists have given who is against the judicial precedents have said that when the courts have the power to shift from what they have said earlier, how can the precedents can be a valid source? They have also said that the practice of different courts are different, now in this situation how can a decision by a particular court be binding on another if the practice of these courts is different? However, to contend this, other jurists like Keeton said that the judicial precedents hold a valid source of law because the courts have the authority to decide on the case where there is an absence of a written statute. However, the precedents can’t alter the existing law and can only make new rules in the absence of written rules over that area. If there is a written rule which covers that case, then the judges are bound to follow it.

Judicial precedents can be classified into various types-

Customs are those usages by the people which establish them as a rule of law. They are followed continuously by the people and due to such continuity, these occupy as a law. They are followed by a very long time. It has been decided in the Tanistry case[1] as follows “It is a jus non-sciptum and made by the people in respect of the place where the custom obtains. For where the people find any act to be good and beneficial and apt and agreeable to their nature and disposition, they use and practice it from time to time, and it is by frequent iteration and multiplication of this act that the custom is made and being used from time to which memory runneth not to the contrary obtains the force of law.”

Customs can be said as one of the oldest sources of law that was widely used as something which is alternate of law. In the ancient times, the custom was used because there were no laws made by the king. It is something that is repeated by the people and then it becomes a custom because the people followed as something in lieu of law.

A custom can be said as a valid custom only when it fulfils the following requirements:

It is not something which is a popular source of law. Still, it is used to shape the law and decide upon the new laws. The professionals and the jurists’ comment/give their opinions on some aspects of law, and if that comment comes to be useful while making a law then it can be said as a source of law.

Hence the study of sources of law play a very significant role because it many times gives the judges a framework to know how to interpret that particular law, it can be done by understanding the sources and accordingly using it.