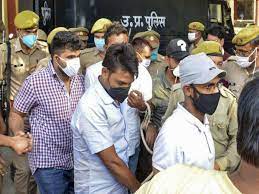 As the police failed to complete an inquiry within 6monThs of the prescribed period against the journalist Siddique Kappan & 3 others, who were accused of breaching the peace after their arrest on Oct 5/20. The Mathura local court decided to stop the proceedings against them.

Kappan who is a Kerala-based Journalist was arrested with his associates when they were on the way to meet the family of a Dalit girl involved in Hathras case who was raped, murdered, and cremated by UP police in secrecy. They are also activists of the Popular Front of India (PFI), which is a Kerala-based Islamic organization, they were charged with threats to peace by UP police and further booked under sedition, violation of UAPA and IT Act. This year, in April, a charge sheet against 8 of them including Kappan was filed in a local court in Mathura, sub-division Magistrate.

Maant, Ram Datt on Tuesday discharged accused Atikurrahman, Aalam, Kappan, and Masood. They have been discharged from charges under Criminal Procedure Code (CrPc) Sections 151 (Arrest to prevent the commission of cognizable offences), 107 (Security for keeping the peace in other cases), and 116 (Inquiry as to the truth of information). They were in jail since October 7/20 under Sections 153A (promoting enmity between groups), 295A (outraging religious feelings), 124A (sedition), 120B (conspiracy) of IPC, 17/18 of UAPA (raising funds for the terrorist act), and under the IT Act.

Kappan’s family and the Kerala Union of Working Journalists (KUWJ) said that the accusations were false and frivolous. This year in April, the family moved to the Supreme Court pleading that he was being mistreated in a hospital in UP where he was admitted due to Covid-19.